Report From New York: It’s Worth A Trip To Ride The Blazing Comet With Pierre & Natasha 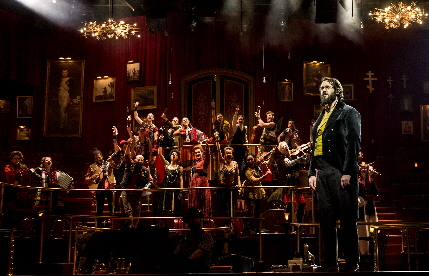 Josh Groban, the bourgeois, the proletariat and whole War and Peace gang in Natasha, Pierre and the Great Comet of 1812 / Photos by Chad Batka

We’re back from our trip to New York to scout out productions you might want to see (or not), shows that might tour South Florida and scripts that might be worth reviving in our regional theaters.  Other shows—all were nominated for Tony Awards– that we have reviewed recently are War Paint, Oslo, Indecent, Bandstand, The Play That Goes Wrong, and Natasha, Pierre and the Great Comet of 1812. Just search for “Report From New York.”

Other than catching unique benchmark performances or productions, South Floridians usually can wait to see a Broadway blockbuster when it tours or when one of our regional houses produces it, if your money or logistics prevent a trip to New York. Heck, Hamilton will be here next season.

But not so, as far as Natasha, Pierre and the Great Comet of 1812  is concerned. It might tour, although it shouldn’t, except for long sit-downs in major metro centers. Regionals might try it, but no one has the fiscal resources to do it full justice.

No, take it from this 17th-to-last critic to see this breath-taking exhilarating work: See it in its current form in New York City. If you saw it in any of earlier developmental incarnations over the last five years, including the tent in the meatpacking district, see it again at the (appropriately entitled) Imperial Theatre.

It’s difficult to say if the music and lyrics are noteworthy (they probably are, especially the rousing group numbers) but they are overwhelmed by a production and performances beyond nearly anything you have seen on mainstream Broadway for its seamless confluence of bottomless imagination, theatricality, density and energy.

For my money and yours, the best seat in the house is on stage just past the proscenium arch where you can take in the entire vista of spectacle. It flows from the multi-tiered cabaret set rising to the back of the stage, then down and back up through the orchestra and mezzanine seats in a snaking network of catwalks and ramps – every few feet populated by cavorting cast members.

So much has been written about this sui generis sung-through score by Dave Malloy adapted from a few dozen pages of Tolstoy’s War and Peace. It tracks the emotional politics among Russian nobility and intelligentsia, focusing on the doomed romance between young Countess Natasha and the profligate Prince Andrey.

Thirteen actors play specific roles but they meld into a larger ensemble of 20 others forming a troupe who not only double as the show’s band but in which every actor (including headliner Josh Groban) doubles and triples as members of the diverse socio-economic strata of Russian society.

The plot is complex and the cast advises you in its opening number to have read the family tree inside the program or read a synopsis posted in the theater in advance. (Or listen to the cast album). It’s good advice, even though they spend the opening number speedily sketching out the relationships. Don’t worry, it will all become evident during the show.

The electro-pop music, glam gypsy costumes and overall style is a drolly clashing mélange of brocaded 19th Century lushness and tattered 21st Century steampunk, which underscores the feeling of abandon and anarchy exuded by the entire cast. When we saw it, Groban was “starring” as the wealthy philosopher slacker Pierre (he leaves next week). He and relative newcomer Denée Benton as Natasha were among the very few cast members who had not been with the work since 2012 in its multiple revisions and productions. But an audience could not possibly tell that this is old hat for anyone because every last one was exploding with passion and dynamic vigor.

That’s crucial because they perform mere inches from some of the audience, so close you can see the tattoos are appliques. There is no place for them to hide since they are on stage for most of the show roaming the aisles, prowling the balcony, whispering in your ear or kissing your hand.

But give credit where credit is due: Groban has submerged himself in the role of the dumpy melancholy observer squinting at the proceedings as if he was trying to focus or simply perceive the folly. He has a waddling walk as if trying to get his sea legs. The acting demands of the role are not especially taxing other than to look like a disaffected hangdog. But that rich baritone and his innate charisma justify his casting; further, he willingly fades into the background when necessary, even playing backup piano and the accordion he taught himself for the role.

The discovery here is Benton who is one of the fulcrums of the work. Her silvery voice can be as angelic as you would hope from a well-bred ingénue or as kick-butt as some of the lyrics require. Slender, stately and simply lovely, Benton inhabited this virginal debutante being buffeted by the raging emotions around her.

The impossibly handsome Lucas Steele does not get top billing as Andrey, but his preening entitled member of the aristocracy is as mesmerizing as anyone else on stage. He will remind you of a blond boy band member resembling Spike from Buffy the Vampire Slayer.

Mimi Lien’s Tony-winning set looks like a cross between The Russian Tea Room-turned-nightclub and the Louvre with cabaret seating, gold railings and paintings virtually obscuring the crimson curtained walls. The jaw-dropping precise split-second lighting by Tony winner Bradley King is only equaled by the costumes by Palamo Young whose stylistic range and endlessly imaginative detail defy adequate verbal description. Check out photos on the Internet. Her Tony loss to The Little Foxes’ Jane Greenwood is a minor crime. Another virtue is the thundering wall of sound including a pounding bass line that seems to shake the onstage seating.

Overseeing it all and clearly responsible for much of what resulted is director Rachel Chavkin, an off-Broadway and regional hand whose unique vision elevates and powers this production that retains a circus flavor. For all the nose-thumbing anarchy and solid winking at the artificial theatricality, she and her confident cast have wrought a highly-polished detailed work of art.

You can easily argue that the exhausting parade runs a tad long. Again, some of the lyrics are stronger than others; none of the mash-ups of Russian folk music, Broadway ballads and pop rock music will stick with you once you’ve had dinner afterward.

But this celebration of life and love and passion pulsates with a fierce infectious vibrancy that is undeniable. Future scaled-back productions may be interesting, but this edition is simply irreproducible. 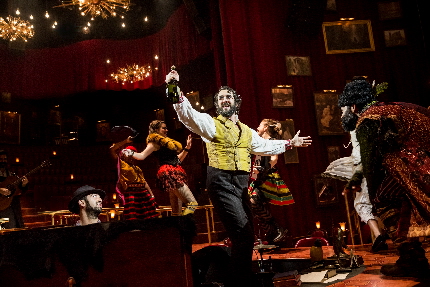