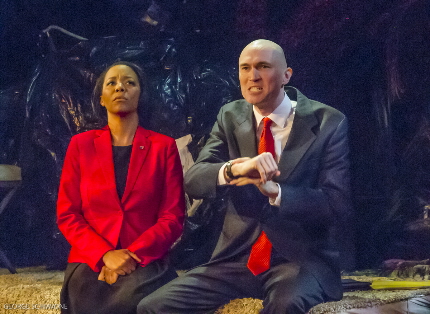 In Theo Reyna’s Firemen Are Rarely Necessary, bald Florida Gov. Sick Rott not only suppresses the words “climate change” but deep-sixes a report that toxic runoff from unregulated industries will profoundly erode the limestone under the topsoil. By the time the play ends, most of Florida is under water and a man-eating giant manatee is looking for prey.

In other words, this world premiere of a socially satirical comedy falls solidly in the anarchic absurdist vibe with grunge icing championed by Mad Cat Theatre Company.

En route to the finale, an environmental scientist goes into hiding and is being interviewed for a documentary by a guerilla filmmaker. Her shallow boyfriend, an actor bemoaning the legislature’s cuts to local film production, finds work as a toady to the governor. The greed-head but none-too-bright governor plans to use erosion and rising water to recarve the landscape into a chain of resort-minded New Florida Islands reaching from the Keys to Tampa. But when Nature goes further than he expects with Cat 11 Hurricane Marco, the governor is betrayed by the son of the current President of the United States who reneges on a pledge to build hotels on the peninsula now turned into a barren archipelago.

In this conspiracy theorists’ vision of the world, you’re not paranoid if everyone’s after you.

Director Paul Tei, who crafted the underlying story with Reyna, delivers it all with a gleeful cross of the agitprop of The Cradle Will Rock, the satire of The Simpsons and the subtlety of a Saturday Night Live skit. Few companies, if anyone do this with as much brio and enthusiasm as Mad Cat. Likely, Firemen is precisely what Mad Cat wanted to create.

The premise is intriguing and Reyna plumbs it for everything that might be in there. But there might not be enough meat there to carry a two-hour play. This reads better on paper than in execution as the evening eventually seems to peter out. After an amusing cartoonish first act, the play’s post-apocalyptic second act meanders around as if searching for an ending. When the journey finds a finale, it seems one last striving to top previous scenes’ how-absurd-can-we-get ethos. Indeed, the last few seconds seem a desperately silly ploy tacked on to put a coda on the evening.

So the evening is inarguably a certifiable hoot, but it’s essentially one obvious dig at a government that has sold its soul for greed. Similarly concerned Carl Hiaasen novels and the musical Urinetown have a plot, conflict and more than a desire to simply tweak noses and cry foul on corruption that threatens our future.

All that said, Firemen is a great deal of fun for an audience willing to plug into Mad Cat’s delightful lampoon.

And Reyna, an actor-director, skillfully writes dialogue capturing the doublespeak insanity of government officials twisting their rhetoric and logic into such a pretzel that the audience has no doubt that the pols are fully aware of their unscrupulous dishonesty despite their rationalizations and plausible deniability.

For instance, the governor scoffs at the prospect that the scientist could use facts to scuttle his plan: “Yeah, but if she can’t prove anything, then her ‘facts’ don’t count. Besides, the thing about facts is they’re not ‘facts’ to everyone. Most people really, they don’t give a shit about them. Couldn’t care less. Some people, they even hate them. They hate facts. Wait… hate facts, that’s good. Write that down or you know, it might make a good hashtag.”

Driving the play is Deborah L. Sherman, the founder of The Promethean Theatre and a Carbonell winner for her medicated bi-polar wife in Mosaic Theatre’s Side Effects in 2011. Her scientist, Dr, Mara Lowe-Cumbre, radiates passion, frustration and anger from the moment she strides onstage to give a warning alarum at a conference. The script asks her only to ride those emotions in varying levels, but Sherman does it with nuclear intensity.

Close behind is Noah Levine’s hilarious riff on Florida’s current chief executive, a whacked out wacky fool marked by opportunistic cravings and heedless ignorance as he pursues what her calls Florida 2.0. He gives a disturbingly sincere reading to the former CEO’s laugh line, “God, this would be so much easier if this was a monarchy.”

None of the characters have more than one dimension but neither do Herman Simpson or Elmer Fudd.

Tei keeps the tone and vision consistent, and the staging commendably invisible. A bit more dramaturgy seems called for to focus more on Mara and less on the governor, and to streamline out cute but narratively irrelevant sidebars like the condemnation of the lawmaker’s cuts to film production.

The scenes are often interspersed with effective evocative footage of the haunted Mara being interviewed by the documentarians – film directed by Ted Chambers and Tei, and enhanced with appropriately spasmodic editing by Chambers.

Mad Cat must have gotten some perverse pleasure in knowing that this production, in development for months, was funded in part by grants from county and state government. (Shhh, don’t tell Rick Scott.),

By the way, it’s not remotely clear what the title means, not that it matters. If that’s the only question you leave cogitating upon, you’ve missed the point of this.

Side note: Mad Cat is participating in the South Florida Theatre League’s summer program with a free reading at 7:30 Monday July 3 of Jessica Farr’s play Expiration Date. The plot is described as “After the execution of a convicted murderer in Little Rock, Arkansas, the family of the victim searches for closure as an investigative reporting team searches for the man they believe committed the crime.”