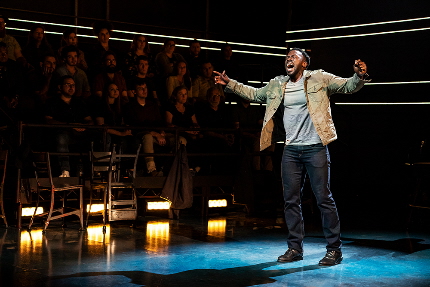 Let’s get it out quickly because this show’s twice-extended off-Broadway run at the MCC Theater ends Nov. 24.

The Wrong Man is a superbly wrought, profoundly affecting work, ranking up there with Floyd Collins. And Joshua Henry’s soaring passion-infused central performance is inarguably among the finest examples of musical theater acting I have ever seen.

This long-gestating labor of love is built upon a book, score and lyrics by Ross Golan, one of the most successful multi-platinum songwriters whom you have never heard of, centering on an ordinary man framed for the murder of his girlfriend, their unborn child and another man.

The A-list skill of all parties (including Hamilton director Thomas Kail  former Miamian music supervisor Alex Lacamoire and incredible choreography by Travis Wall) has produced the kind of unforgettably electrifying and astonishing work that elicits a string of ecstatic adjectives that don’t quite do justice to the experience.

The 90-minute piece is a sung-through drama made up of individual songs delivered by Henry as Duran, the man trapped in tragedy; Ciara Renée as his troubled love Mariana; Ryan Vasquez as the evil Man in Black, and an ensemble of fine singer-dancers.

Across a bare stage with only a few chairs and benches plus bleachers on either side, they tell of a likable African-American everyman who has had some bad breaks and moves to Reno for a fresh start. He has a spiritually restorative one-night of love-making with Mariana whom he met in a bar. He has hopes for a future again and begs her to leave town with him, especially upon learning she has become pregnant. But her estranged husband, the Man In Black, returns, kills her and a stranger, then with double pleasure frames Duran. Our protagonist is arrested, tried and convicted in a state with a death penalty.

It is no spoiler that this tale spirals toward Greek tragedy as inexorably as Oedipus Rex. As with most tragedies, the narrative arc is as familiar as a ritual and the predictability amps the anxiety and tension because you know what will happen while hoping it doesn’t. What Golan and Kail have done is tell the story so that the audience is not an outside observer but seeing the tragedy from the inside, forced to vicariously experience the hero’s agony.

As a journalist who spent much of his life covering crime and as someone familiar with the work of The Innocence Project, doubtlessly I overlaid an extra layer of receptivity to the plausibility of the narrative. Well, in this era of Black Lives Matter, so can several million other people, although Duran’s race is never mentioned.

The music encompasses rock, R&B, rap and a bit of musical theater tropes melding into a sound that Golan has constructed vaguely reminiscent of Murder Ballad. His lyrics are unapologetically straight-forward passionate declarations with just a hint of poesy as well as clichés because these characters are not Sondheim sophisticates but everyday people. Granted, almost all of the songs are cut from the same cloth in which someone’s inner angst erupts from their soul – but their power and easily relatable truths are mesmerizing.

Vasquez, saddled with a one-dimensional totemic role, does a fine job as smirking evil incarnate, and Renée imbues a sexy persona with a sadness incubated in years of a nightmarish marriage.

All of the elements are strong, but it is Henry’s work that owns the evening. With his rich deep voice, he pours out the confusion, fear and pain. These emotions also are writ with crystalline clarity on a visage, with body language and a half-dozen other acting tools that are mesmerizing. If this work was on Broadway, he’d be worth betting the house on winning the Tony that he has been nominated thrice before (Carousel, The Scottsboro Boys and Violet.)

Often, the main characters will sing of inner emotions or describe plot developments, which Wall then has his troupe illustrate at the same time in a sensuous, swirling balletic/modern dance style of interlocking bodies that would be  clearly and precisely communicative even if there was no accompanying lyrics. Wall, apparently famous for Emmy-nominated work on So You Think You Can Dance believe it or not, creates astonishingly effective visual storytelling, including the most harrowing if stylistic depiction of sexual assault, physical abuse and murder you’ve likely seen on stage.

Every aspect of the evening is molded by Kail and Wall into a seamless whole including Betsy Adams’ lighting, Nevin Steinberg’s sound, and Taylor Peckham’s lead of the on-stage band.

Golan has collaborated with about half the singers and songwriters in the business in everything from pop to country; a smattering of boldface names includes Ariana Grande, Maroon 5, Justin Bieber, Nicki Minaj, Lady Antebellum, Selena Gomez and Keith Urban. He first wrote a song connected to this theme sometime after graduating from college. The work grew over the next 15 years, played live at friends’ homes and parties, and now has bowed as an animated film and concept album. While its popularity grew for those exposed to it, it was the success of Hamilton and a rising interest in true crime stories that likely made producers think it had legs, he told a group of critics last week.

Getting rush tickets for a Sunday matinee, we somehow got the best seats in the house at one of the two spaces in MCC’s intimate new venue on West 52nd Street, cementing the audience connection to the story. We can only hope that this extraordinary show is revived with every one of these players as soon as their schedules allow – but only in an intimate space.