The Wolves Is Complex, Filled With Dogged Determination

Posted on November 9, 2019 by Bill Hirschman 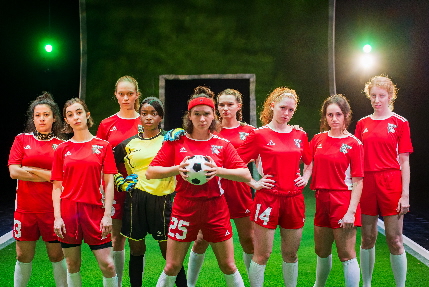 The Wolves fits the bill for Zoetic Stage’s Theater Up Close series. It’s an up-close, navel gazer. Nine teenaged girls are part of a high school indoor soccer team that meets each Saturday. The characters are nameless, only identified by jersey number. For 90 minutes, the audience is privy to eavesdropping on the locker-roomesque conversations as they warm up for a series of games.

Here, from their suburban microcosm of the world, they dissect parts of their everyday lives, while trying to get a handle on the big picture of the world.
Sarah DeLappe’s play, a 2017 Pulitzer-prize finalist, and directed for Zoetic Stage by Stuart Meltzer, explores so much in six scenes that there’s almost too much to digest. More importantly, what of this routine banter should we take in? The horrors of Cambodia and Khmer Rouge? Asian Nazis? Turf allergies? Pads or tampons? Central America. Middle America. Mexicans in cages. Genocide. Living in a yurt. Harry Potter. Netflix. Skype. Emergen-C or placebo? Plan B or abortion? Don’t try to keep score. Like that Abbott and Costello skit, the circular dialogue might have you wondering “Who’s on first?”

The South Florida premiere of The Wolves is exceptional in its ability to maneuver so much exposition and keep pace with demanding action, which arrives in the form of arduous workouts. Meltzer navigates tricky, puzzle pieces of blocking. The playbill bios of the nine “soccer player” actresses reveal mostly graduates of New World School of the Arts in Miami or based in New York performers.  While this team misses the mark on creating an ensemble — DeLappe has no central character but gives each individual equal weight – the personalities they bring to life are witty, intelligent, confused, diverse and memorable.

Laura Plyer’s team captain No. 25 shouts orders like a drill sergeant and finds her soft spot as she discovers her sexual identity, while Goalie No. 00 (Tuesline Jean-Baptiste) worries herself literally sick before each game, running off stage to vomit. Paloma Leite’s No. 13, skilled in her robot dance moves, is the class clown. No. 7 Harley DelCogliano is the bad girl with a potty mouth and a college boyfriend.  No. 14 (Rachel O’Hara) has lost her own identity to go along with best friend No. 7. The kind waif, Lisa Naso’s #2 is dubbed the queen of the CAT scan because of her multiple concussions, but she may also be battling an eating disorder. The playwright doesn’t give enough of a story to No. 8 (Katherine Burns) whose big moment comes when she finds out that nationals are in Tulsa instead of Miami so no chance to visit Disney World or No. 11 (Cynthia Bonacum) who over analyzes herself as the daughter of two parents who are therapists.

Many of the comic moments are left to No. 46 (Caitlyn Meagher), the new girl who lives in what her team members believe is a “yogurt.” It’s really a yurt. The invention of her being home schooled because her mother is a travel writer who travels to exotic places doesn’t match the character’s role of social misfit or the yurt living.

A grieving soccer mom (Elena Maria Garcia) interrupts the moment when the girls should be processing their grief together after a teammate’s tragedy. An actress of superior talent and skill, Garcia tries to find a reason for DeLappe’s histrionic intrusion, yet the melodrama is unavoidable.

There’s missed opportunity to hit a peak of a solid ensemble performance. We are so focused on each of the girls’ individual dissections that the idea of the team takes a back seat. Is it a weakness of the play’s structure or a bonding that hasn’t yet reached its potential in this production?

The traverse stage set up, with the audience on two facing sides, gives the atmosphere of bleacher seating, which adds to the game-day illusion. Natalie Taveras’s simple, elongated Astro Turf playing area with each end curving like giant waves is bright and atmospheric.

With a constant frenzy of motion like the soccer ball the girl’s kick around, The Wolves should have more bite to its bark. The biggest drawback is that there’s never a sense of do or die for this team, although there are reasons that we should believe these girls are in it to win. Zoetic Stage goes out on a limb with The Wolves and its dogged determination to score ends up a way to overshadow its flaws.

The Wolves from Zoetic Stage as part of the Theater Up Close series performs through Nov. 17 in the Carnival Studio Theater at the Arsht Center’s Ziff Ballet Opera House, 1300 Biscayne Boulevard, Miami. Performances are at 7:30 p.m. Wednesday-Saturday, 3 p.m. Sunday. Tickets are $50 and $55. Running time is 90 minutes with no intermission. (305) 949-6722 or www.arshtcenter.org.