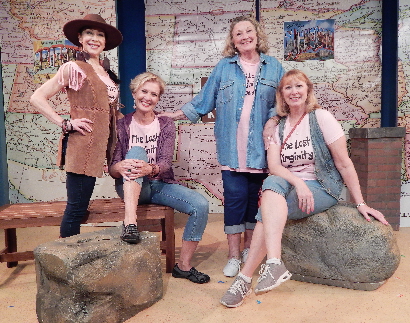 It would be cliché to liken The Lost Virginity Tour to the hit sitcom The Golden Girls, but it is impossible to not extract the similarities. There’s no judgement here; nothing more than a statement of fact.

The Lost Virginity Tour, produced by Pigs Do Fly Productions and performed at Fort Lauderdale’s Empire Stage, makes the most out of Cricket Daniel’s simple script. Director Deborah Kondelik and the tightly knit ensemble of four talented actresses, Leigh Bennett as Kitty Warmerdam, Barbara Bradshaw as Elaine Matthews, Diane D’Ambrosio as Viola McGee, and Barbara Sloan as Rita Hanson, add a feisty level of vitality and vivaciousness to the “women of a certain age” play.

In the first of five scenes, we drop in on Elaine’s kitchen in the Happy Trails Senior Resort Community in Surprise, Arizona (Surprise! Yes, there is a Surprise, Arizona, just 20 miles northwest of Phoenix). It is Elaine’s turn to host the weekly Happy Trails Baking Club meeting, of which the four friends are the only members. The first scene consists of mostly Viola and Kitty carping constantly at one another, while Rita and Elaine act as mediators. It’s obviously a song and dance that plays out in the group frequently.

Elaine, a widow, is the oldest of the group; Rita, earthy who looks like she’s never missed a yoga class, is happily married forever to Dean; Kitty, a smoker trying to quit, perpetually single, and former Southern belle has purposely squashed all remnants of her proper past, although some emerge now and again. Her Southern drawl remains intact. Viola is the divorcee, married four times, no children, a loud-mouthed I-tal-ian from New Jersey. She never misses an aerobics class.

After they’ve paid their dues in a measuring cup, it’s time for each to bare their baked good of the day. Instead of the three-martini lunch, it turns into an alcohol-laced cookie afternoon – Elaine offers up bacon and bourbon chocolate chip cookies, and Rita has brought Kahlua infused snickerdoodles. Perhaps it is the booze talking, but the women start sharing tidbits of their first sexual experience. Voila! Viola has an idea. It’s time to get the ladies out of Happy Trails and on the road to visit each location of virginity lost.

They are all up for an adventure. Viola gets them ready in pink tour T-shirts with The Lost Virginity Tour emblazoned on the front, and the cities and states they’re to visit on the back (note to Pigs Do Fly: how about selling the shirts in the lobby? There would be buyers, I guarantee). Viola’s instructions: “You just need to pack wine and three week’s worth of underwear!” Elaine does one better: I packed three weeks’ worth of underwear and four weeks’ worth of wine.”

It would be a spoiler to giveaway any of the details of the women’s stories as they each divulge their first time, but they aren’t all roses and boxes of chocolates. There’s only one that keeps the humor intact throughout; the other three are full of highs and lows, some laced with more heartbreak than another.

Daniel has written the four scenes distinctively; one isn’t like the other. That focus works as the play unspools and each tale serves as a building block.

Kondelik keeps everything moving swiftly to ensure that the comedy keeps up its road-trip pace.

Despite what appears to be simple, the showcases for each actress require a deep understanding in order to have them ring true. That’s where to revel in the beauty of this production: to enjoy how Bradshaw, Bennett, D’Ambrosio and Sloan create such depths of character and find the vulnerability in each. The ensemble works together, yet perfects their own emotional diary and the results play as fresh revelations, as if the characters have just discovered parts of themselves in the here and now.

As for the stories that Daniel has given each woman, some are creatively original, while the third descends into a sad, “we’ve heard this story before” abyss. As the tale unfolds it becomes more and more predictable. The subject matter is serious and certainly there is no intention here to minimize the importance of its message.

As the fourth and final story to come to light, Bradshaw brings everything to a beautiful crescendo. To see this actress in any role is a treat, but one that allows her room for discovery such as this, where she can draw from a career’s worth of roles, is a treasure. As Elaine tells her first-time love story, you hold your breath watching an exercise of truth in acting; it is an experience, and a pleasure.

There are other moments that an audience will take for granted but should be pointed out for their mastery. In her script, Daniel gives notes on how to segue from state to state between each scene. She suggests the use of video of a car crossing the U.S., or the ladies can “drive” around on the stage during scene changes. She gives leeway by telling the director: “Be creative and have fun.”
Kondelik takes her at her word, creating original voiceover dialogue between each scene. It’s creative and does more than serve a purpose; it serves to develop the characters even further for the audience.

Pigs Do Fly has grown into its own with its mission of presenting plays about “people” over 50 “living interesting, active lives.” They couldn’t have found a better fit than The Lost Virginity Tour, however, men may have a difficult time relating to the female-centricity of it all a la Menopause the Musical without music. But for the ladies who lunch, golf, or play bridge, it’s the perfect girls’ night or day out.