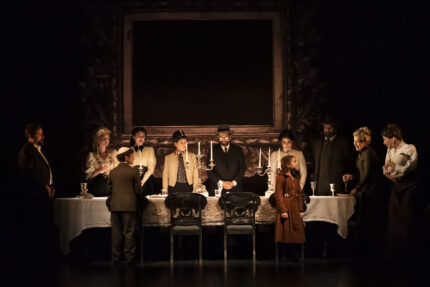 We’re back from our trip to New York to scout out productions you might want to see (or not), shows that might tour South Florida and scripts that might be worth reviving in our regional theaters. The shows include: Almost Famous, Into The Woods, & Juliet, Death of a Salesman and Leopoldstadt. Links to other reviews can be found at the bottom as the reviews run.

For all the uniquely Stoppardian avalanche of intricate musings about politics, math and other esoteric topics in Leopoldstadt, the tableau many of us will have seared into our memory is one often portrayed on stage, in film and on television.

A prosperous Jewish family’s debate whether to flee the Third Reich is short circuited on Kristallnacht by the knock on the door. A group of sadistic Nazis terrorize, demean and finally order them to a fate we know. The impact in this overall triumphant production is far more shattering than in any previous staging in another work.

Perhaps it’s because pantheon playwright Tom Stoppard is so skilled, perhaps because we know this lengthy multi-part tale is semi-autobiographical, perhaps because director Patrick Marber and a superb cast has connected us so deeply with this large group of complex human beings who have discovered that social upheaval has swept away their denial.

You have seen and heard all this before, but this shattering scene two-thirds of the way through this 2-hour 10-minute journey is literally breathtaking.

Yet, it is only one portion of this difficult borderline masterpiece that tracks a half-century in the lives of a large bourgeoise Jewish family in Vienna as the world around them changes.

In what may be the 85-year-old Stoppard’s last full-length play, a dozen themes intersect and collide with classic Stoppardian complexity that defies simple explanation. Suffice it to say that a subtly continuing touchstone is the characters playing obsessively with the ever-morphing string puzzle, a cat’s cradle.

Beginning in December 1899, the multi-generational Merz and Jakoboviczes families are a collection of Jewish businesspeople, social sophisticates, academics, intellectuals and Gentiles who have married into the core family. At a bustling family gathering in a gorgeously appointed drawing room, they are simultaneously celebrating Christmas and Hannukah to the point that a child playfully tops the evergreen with a Star of David.

Among the adults and children carousing in genteel manner, we meet socially ambitious businessman Hermann Merz (David Krumholtz) who converted to Catholicism when he married his wife Gretl (Faye Castelow) — a practical business-related move meant to ease him into mainstream society. Next, there is Hermann’s sister Eva (Caissie Levy) and her husband Ludwig (a brilliant Brandon Uranowitz), a mathematician who believes his career has been blunted by anti-Semitism.

The adults’ debates touch on everything from Mahler to Freud to Theodor Herzl’s proposal for an independent Jewish state in Palestine.

But underneath is an article of faith in assimilation to the point that some of the family look down on those “shtetl Jews” who stick out in a crowd. Still, the family will celebrate Passover in the next scene and a bris later on. Hermann contends to Ludwig that the anti-Semitism built into their Austrian society is not anything to worry about. Things will calm down; it will all pass.

He says, “Fifty years ago you couldn’t get a foot in. You couldn’t travel without a permit, or get a bed for the night in village or town except in the Jewish quarter. And if you lived in Vienna you lived in Leopoldstadt, you wore a yellow patch, and stepped off the pavement to make way for an Austrian. By all that’s holy, it happened in one lifetime. My grandfather wore a caftan, my father went to the opera in a top hat, and I have the singers to dinner.”

The pros and cons, the very ethicality of assimilation is a major theme that will resonate for American Jews in the audience, but also for any ethnic group living in a country for two generations (perhaps Cuban-Americans in Miami?) These families seek safety, surety, affirmation, a sense of belonging in what they don’t see, but we do, is a flimsy illusion.

As time moves a quarter-century, one member we met in the first scene has been killed in World War I and another has lost an arm. Social changes weigh heavily such as the rise of Bolshevism. Then in a scene a decade later, the Nazis confiscate the family business and send most of the family to concentration camps.

Finally, in 1955, three surviving cousins gather to recollect their history: One’s family moved to America; another survived Auschwitz, and the third is an English writer who moved to England as a child and knew almost nothing of his Jewish past until late into adulthood – similar to what happened to Stoppard.

The emotional journey is exhausting as it moves from 1899 to 1900 to 1924 to 1938 to 1955, all of it taking place in the same living room, initially luxurious and dominated by a huge painting; then refurbished in stylish modern in the Roaring 20s with a portrait of Gretl by Klimt; then deteriorates as events overtake the family.

Of course, this is Stoppard so the journey stops every 10 minutes or so for characters to dive into almost impenetrably dense discussions. They require most audiences to glide over them in their consciousness like you do with the triple names of characters in a Russian novel. (I saw his Invention of Love in 1997 and understood not a whit of it, but I got to meet Stephen Sondheim at intermission).

Given that there are about 35 characters (well, some actually are earlier characters grown up or grown old), it requires the audience to always be paying attention to understand who is who.  One of the challenges, perhaps qualifying as a flaw, is the difficulty catching on to the names and relationships unreeled in the first act, and which change somewhat in succeeding scenes. A family tree is included in the Playbill although it’s not much help until you’ve seen the play.

For all the confusion about who is related to who and how, and the impenetrable side debates, Leopoldstadt remains a stunning work of theater, especially given its uncomfortably resonating depiction of a growing wave of anti-Semitism.

The play has been extended to July 2 at the Longacre Theatre and it is well worth seeing on Broadway, in part because of the amazing acting, direction and lighting, and because the huge cast size and complexity of Stoppard’s work make it unlikely a South Florida theater is going to snatch it up anytime soon.

This entry was posted in Performances, Reviews and tagged Leopoldstadt, Tom Stoppard. Bookmark the permalink.