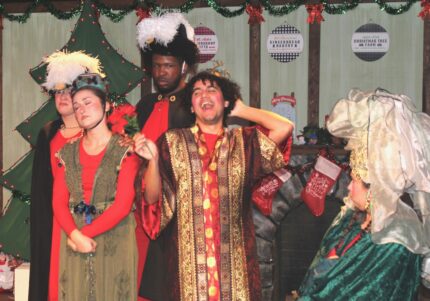 While there is much to rave about onstage in Main Street Players’ (MSP) current holiday production, an incident offstage during a recent performance was also cause for applause.

In particular, one of the vignettes in MSP’s holiday show this year, Aesop’s Fable-ous Christmas Tree, illustrates the maxim “Do unto others as you’d have them do unto you.” Soon after one of the actors stated this maxim, an audience member who sounded like a small child responded by saying the words, “The Golden Rule.”

The child who apparently recognized the aforementioned maxim as “The Golden Rule” was one of several little ones in the audience for a performance of MSP’s vibrant, funny, and playful production on Saturday night. It opened on Friday night, and runs through Dec. 18 in MSP’s intimate playing space on Main Street in Miami Lakes.

This year’s holiday production is the first of many to come, according to MSP’s vice president, Daniel Nieves. He said that in the past, the professional company, which used to be a community theater, mounted Christmas-themed productions around the holidays. However, at least 10 to 15 years ago, for an unknown reason, that practice stopped. But in recent times, audience members have been requesting that MSP’s annual holiday show return. The company has granted their wish.

“The plan is definitely to make the Christmas show a staple,” Nieves said after the  reviewed performance.

During the performance, a cast of eight energetic actors (Chloe Schwinghammer, Elizabeth Guerra, Michael Fernandez, Dayron Leon, Bianca Utset, Sterling Tribue, Diana Buitrago and Kyran Wright) demonstrate that they are not in the least shy about getting up onstage and acting silly and goofy. Silliness and goofiness reign during the roughly one-hour production, which runs without an intermission and carries a playful children’s theater vibe.

By the way, Aesop was a slave and storyteller. Historians believe that he lived in ancient Greece between 620 and 564 BCE. The stories associated with his name have descended to modern times through a number of sources.

While there is much value in holiday shows such as A Christmas Carol and A Christmas Story, it is refreshing to witness something different every once in a while.

Through exaggeration and slapstick, what we would call “Low Comedy,” Aesop’s Fable-ous Christmas Tree offers easy laughs for actual children and children at heart. But this show also features content that adults who prefer deeper material might appreciate.

For instance, in one of the vignettes, a king has developed a new scent for this year’s Royal Christmas Candle. After arguing with the queen, who opines that the scent is “the foulest, rankest scent that ere I smelt!” the proud king demands that guards bring forth his “subjects” to offer their opinion.

“P.U. Sire! That is the rankest scent that ere I smelt!” one of the subjects offers.
“Guards! Lock him up!” the king retorts.

Eventually, the queen opens a present downstage and shows the audience the underside of a lid, where the moral of the tale reads: “If you can’t say anything nice, don’t say anything at all.”

However, a character from a previous tale in the show, “Christmas Spirit,” interrupts her majesty.

“The moral of my story was ‘Honesty is the best policy,’” he says. “When he (indicating a royal subject) told the truth, you put him in chains. So is honesty the best policy or not?”

Perhaps this king reminds you of a leader in the world today. Or, maybe you will leave the theater wondering which maxim you should follow if a similar situation arises in your life.

Other vignettes in this show are not as thought-provoking. In one of them, titled “Sick Day,” Donner and seven reindeer enter, marching in formation. These obedient reindeer face a dilemma. Namely, Rudolph the Red Nosed Reindeer “has a terrible cold in his nose and it just won’t light up.”

“Couldn’t Rudolph just take an antihistamine to clear up his nose?” Dasher the reindeer asks.

“Unacceptable,” Donner responds. “Should he fall sick during the journey, there’s just no safe extraction point. No, I’m afraid he won’t be joining us on our mission tonight.”

The reindeer than must devise a plan as to how they will navigate the skies in order to bring toys to good girls and boys on Christmas. “Necessity is the mother of invention” is the take-home message for “Sick Day.”

Scrooge, however, is healthy and, as usual, bitter in this show.

“Bah! Humbug!” he says, as he does in A Christmas Carol. And, once again, he is a changed man by the end of the vignette in which he appears. Predictably, he wishes everyone a “Merry Christmas.”

In addition to acting, the performers rap, sing, and use different objects to make music.

Meanwhile, set designer Amanda Sparhawk has created a festive-looking, cozy performance space. For example, boxed presents rest on parts of the set, which also features a fireplace, Christmas stockings, and a pretend Christmas tree. The set’s main colors are, appropriately, red and green.

To match the set’s colors, costume designer Angie Esposito has outfitted the actors in the hues of the season. Also, to match the often-exaggerated acting, Esposito’s outfits are colorful and outlandish.

Lighting designer Alejandro Milian has lit the set and actors realistically. And sound designer Alex Tarradell helps ensure that we can not only hear, but understand the actors. Of course, we feel a greater connection with them due to the theater’s intimacy.

Director Brandon Urrutia guides cast members with a playful, over-the-top energy. To their credit, it never feels as though the performers are showing off.