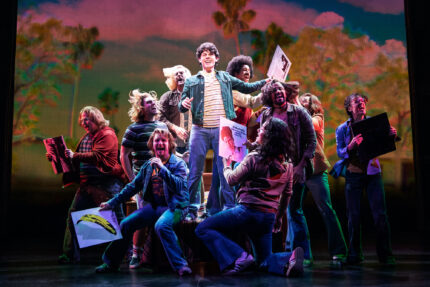 Arguably, there is virtually nothing that cannot be turned into musical. Who thought Victor Hugo’s doorstop of a novel about miserable people would turn into a blockbuster or T.S. Eliot’s children’s poems would produce a long-running opus of singing and dancing felines?

But being able to construct something doesn’t mean crossing disparate creative genres is necessarily a good artistic fit, let alone worth the considerable time, heart and money – especially the audience’s money.

So there’s nothing badly constructed or even half-baked about the pleasant new musical Almost Famous based on Cameron Crowe’s 2000 charming and winning film depicting an enraptured teenaged writer embedding with a rock band travelling across the country in 1973.

It’s pretty much guaranteed to be entertaining for us Boomers, savoring the classic rock sound and several dozen wry references to a time gone by (to which that audience will grin with bemused recognition and some reluctant-to-get-caught-at nostalgia).

That said, it’s hard to imagine that our parents, children and grandchildren who grudgingly accompany us to the theater will see it as much more than a mildly diverting curiosity. It’s a decent effort from a group of earnest professionals, but with the exception of one scene, you’re not likely to remember much of it two weeks later.

Crowe’s fictionalized semi-autobiography tracks William Miller, a suburban California 15-year-old rock devotee who wants to be a music journalist. He manages to con an assignment from Rolling Stone – and his widowed mother’s very reluctant permission — to cover the first few days of a tour by Stillwater, an up-and-coming band.

He gets bewitched by the ferment, and the publicity-hungry band begrudgingly adopts him as “the enemy.” No surprise, he ends up travelling with the musicians across the country along with a quartet of ladies who call themselves Band-Aids (who refuse to acknowledge they are just uber-groupies).

Central to story is the charismatic lead guitarist Russell Hammond who has artistic aspirations but who is, upon closer examination, self-centered and a user. Clearly in love with him and sleeping with him is the lovely good-hearted Band-Aid calling herself Penny Lane. She also takes William under her multi-colored coat, nurturing him and creating a bond of trust that William would turn into something deeper if he was a decade older.

But the band is fighting and stressing at the edges. Russell inferentially promises a lot of things, not the least of which is the linchpin interview for William’s story, but he keeps putting it off.

Suffice it to say that Russell betrays almost everybody including William and Penny, illuminating life-altering lessons as those two evolve forward in their lives.

Underneath the film and the musical is the sense that fame and rebellion itself are not as fulfilling as they appear from the outside, that a part of growing up is realizing that our heroes may not be as worthy of unquestioning adoration as we initially thought. And yet at the same time, it celebrates the glory of unreined freedom of those happily steamrolling over society’s boundaries. For those who came of age at that period, Almost Famous resurrects fond recollections or regrets.

The problem is that the specific vibe of the film just doesn’t translate to a musical. As it has been said many, many times, The Musical is sui generis. Crowe’s film, while imbued with a fairy tale feel, is naturalistic. But the inherent falsity and required theatricality of a musical is not only inescapable, it’s part of the reason for the art form. So to have these characters swerve into introspective ballads or break into choreographed production numbers erases the magic of a story about a rebellious era and counter-culture heroes.

Crowe has augmented his story line with music and lyrics by Tom Kitt (the wonderful Next to Normal) although the Playbill lists 16 songs by Stevie Wonder, Joni Mitchell, Crowe’s ex-wife Nancy Wilson of Heart who wrote with Crowe years ago and others from the pantheon. Only one of the new numbers is especially memorable: Penny Lane expressing her dream of a better life in a heartfelt ballad “Morocco.”

The sole moment that lands solidly is taken directly from the film’s memorable scene on the tour bus: It’s the middle of the night. The band members have been squabbling, Russell is still wiped from a self-indulgent drug trip at a party, everyone is burned out and bummed out. Someone just idly starts to murmur the opening lines of Elton John’s “Tiny Dancer.” It’s that warm gentle song that the band would never get caught playing on stage. Then someone unthinkingly joins in, then another, then the whole busload including Russell are singing together. It’s a clear depiction of their mutual love of music, what had brought them together and what keeps them together.

The performances are solid enough musical comedy tropes, although none of them feel especially deep or nuanced, but they serve to keep the narrative moving smoothly.

Casey Likes does a credible job playing what I’m calling the Evan Hansen Role that has been a Broadway icon for decades but now shows up in half the shows opening these days – a bright but quirky teenager almost always with curly black hair trying to find who he is. He projects the required youthful energy and yearning.

Chris Wood exudes Russell’s broodingly sexy charm that masks a cruelty and Solea Pfieffer’s delivers a lovely Penny who makes it easy to see why everyone gets a crush on her.

Director Jeremy Herrin leads an A-list of designers and artists although little here is going into their scrapbook. Nods are due the costume designer who has done his archeological studies and the providers of a large array of wigs, applied facial hair and makeup.

This production, which was sidelined by the pandemic, is obviously a labor of love for Crowe, to the point that the Saturday night we saw it, he was greeting folks on line waiting to get in and then spent the after-curtain in the lobby signing anything anyone put in front him.

Almost Famous in an open-ended run at the Bernard B. Jacobs Theatre. Tickets: https:// www.almostfamousthemusical.com, plus there is a rush and lottery.