Report From New York: Stunning Shuffle Along Is Paean To Ground-Breaking Theater 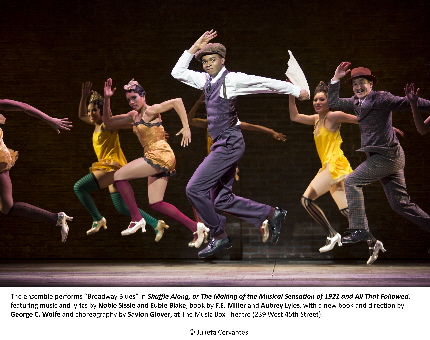 The ensemble performs “Broadway Blues” in Shuffle Along, or The Making of the Musical Sensation of 1921 and All That Followed / Photos by Julieta Cervantes

Looking at faded sepia photographs and listening to scratchy primitive recordings, you wonder what productions were really like live in vibrantly-colored three dimensions when vaudeville was surrendering to legit Broadway.

Were the Ziegfeld Follies or George White’s Scandals as spectacular as the second-hand reports of the day, or were expectations of the period so much lower, so much quainter than today?

The proud, insolent answer is fired back in roaring spectacular style from the stage of The Music Box theater on Broadway where Shuffle Along fuses breathtaking, dancing, glorious music and a social message into a seamless whole.

If not for Hamilton, this celebration of early musical theater and a simultaneous examination of racial prejudice would be the leading contender for half the Tony Award categories next month. Some of the finest talents working in theater today have polished this production to a high gloss like the patent leather tap shoes hammering the stage.

Audiences also have a once-in-a-lifetime opportunity to witness the awe-inspiring confluence of two legendary partners, Audra McDonald and Brian Stokes Mitchell, with three performers at the top of their game, Billy Porter, Joshua Henry and Brandon Victor Dixon, and one blazing relative neophyte, Adrienne Warren.

The original Shuffle Along was a 1921 musical which reportedly broke ground in a half-dozen ways including as the first major black musical with a plot rather than just a revue, the first such to be staged on Broadway (albeit far north on Broadway) and the first Broadway show acted, written, composed, directed and for all intents and purposes produced by African-Americans. The songs were by Noble Sissle and Eubie Blake, the headliners/managers were the vaudeville team F.E. Miller and Aubrey Lyles and it featured performances by then-prominent famous names like Lottie Gee, Gertrude Sanders, Florence Mills, and later replacements like the soon-to-become even more famous Josephine Baker and Paul Robeson.

This 2016 Shuffle Along – whose full title includes Or The Making Of the Musical Sensation of 1921 And All That Followed – is the beloved brainchild of director George C. Wolfe (Angels In America, Jelly’s Last Jam). For several years, Wolfe shepherded this musical that charts the development of a cultural watershed and its aftermath, featuring a new book interspersed with scenes from the original show and with a score drawing heavily on the catalog of Sissel and Blake. Like Cabaret, it uses the musical theater construct as a platform for documenting serious issues while seducing the audience with entertaining song and dance.

Wolfe’s script is a kind of vaudeville from beyond the grave as the principals of the production narrate directly to the audience the saga of the show’s evolution, then chart how the allure of continued success broke apart the creative team and sent them into near obscurity. The show has a distinct emotional arc from an ebullient opening through uplifting triumph to a rue-filled tragic slide for all of the principals. Frequently, the narrators make acerbic asides to the modern audience such as noting the controversy over charging a top ticket price of $2.50.

Racial issues are faced head-on throughout. Every character has faced the soul-scarring dichotomy of being applauded by white people, while being denied access to the theater except through the back door. When the show runs out of money in previews on the road and not been paid in weeks, F. E. Miller unites them with an a capella “Swing Along” echoing the broader importance of what they are attempting  – whose rendition by Mitchell is one of the goose-bump inducing highlights of the entire show.

There are easily a dozen similar moments that could double the length of this review. The production number “I’m Just Wild About Harry” would stop the show if it wasn’t the Act One closer.

But the explosive standout among this brace of fireworks is Savion Glover’s choreography. A frequent colleague of Wolfe in such works as Jelly’s Last Jam and the groundbreaking Bring in ‘da Noise, Bring in da Funk, the ultra-modern tap genius has produced his masterwork. The electrical current flows from the moment you hear tap dancers warming up behind the heavy red curtain even before the overture begins. His dance vocabulary seems as period authentic as anyone could discern, but, in fact, the moves inside that framework are as endlessly inventive and original as conceivable. Whether it’s a stage of superb dancers pounding their tap shows on the floor or the principal actors gliding around the stage, Glover’s joy-filled work is as flawless as the ensemble’s execution.

Wolfe injects the show with intelligence, sex and a propulsive feel until the relationships begin to fray. The last half of the show does feel more like an elegy as their fortunes deteriorate, but it gives the performers more opportunities for contemplative ballads.

There’s also an implied rebuke: The fame of many of the people connected to this landmark have faded away. As characters tell us more than once, it changed everything and then was forgotten. Although connected to the renewed interest in ragtime in the 1950s, Eubie Blake’s name and fame resurfaced only in 1978 at the age of 91 when his music was the centerpiece in a revue Eubie! Of about 30 songs, the only one most audiences will recognize is the aforementioned “Harry.”

The unsung hero of this production, well actually his work is sung, is Daryl Waters, the musical supervisor, orchestrator and arranger who took a raft of Sissel & Blake pop and jazz tunes and formed them into a full-fledged kick-butt Broadway score along with penning a massive amount of underscoring and incidental music,

Who knows what the financial investment is, but it’s all there to see from the large skilled ensemble, the expensive-but-worth-it leads, Ann Roth’s literally hundreds of vibrant costumes and endless scenic elements. But especially telling is one solely book scene set in a Chinese restaurant. In most shows, we’d see maybe a table with a fancy cloth, a few ferns and a waiter in a kimono. Here, the background scenery is a half-dozen actors dressed in impossibly elaborate faux Follies Chinese garb, with their arms outstretched forming a lush backdrop with others holding intricately ornate lanterns.

We’re backing into the outstanding cast of Tony winners and nominees who, by the way, dance almost as hard as the ensemble, and that includes McDonald and Mitchell. 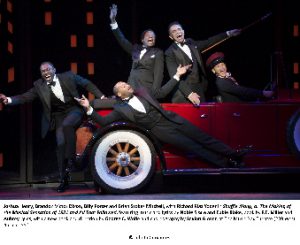 The apple-cheeked Adrienne Warren in a double role as up-and-comers Gertrude Sanders and Florence Mills has enough energy and charisma to light up Times Square on New Year’s Eve, no more obviously than in her featured turn “I’m Just Full Of Jazz.”

Porter, who won a Tony for his cross-dressing diva in Kinky Boots provides the cynical voice, scarred by experience, but who throws himself into the project anyway. A survivor of both poverty and racism, the acerbic Lyles spends much of the show with his eyes bulging as if shell-shocked. But he comes blazing to life and earns every bit of his salary with the solo “Low Down Blues.”

Mitchell as Miller brings a quiet grounding dignity to the entire evening with that inimitable warm baritone bass and eyes that glow with a measured joy at what is occurring. His easily embodies the gentlemanly mien of Miller who came from more well-heeled and educated origins than his compatriots.

Another crime in the Tony nominations was the omission of McDonald as the elegant leading lady Lottie Gee. OK, she has six Tonys, but omitting her without at least a nomination devalues the prize. This show settles so well in her wheelhouse of light comedy, quiet drama and gorgeous music, but she never ever coasts as that voice shines like the 10,000-watt candlepower of a lighthouse. But once again, she reaffirms that she is so much more than a vocalist. The actress creates a performer who has fought hard to achieve the skill and parochial fame. But for all her bravado, Lottie knows that she has yet to make a mark in the white world. Additionally, there is little in the way of abuse from lustful black men and racist whites during her journey that she hasn’t long ago learned to parry with a witty tart rebuke.

It was known earlier that McDonald would be leaving in June to perform Lady Day at Emerson’s Bar & Grill in London for three months. But the producers announced last week that she will be taking open-ended maternity leave July 24 with a possible winter return. Grammy Award-winning singer Rhiannon Giddens will make her Broadway debut as her replacement. Our advice is not to miss McDonald.

Again, it’s a tragedy that Shuffle Along is running head to head with Hamilton, although the producers’ gambit to have it declared a revival for Tony purposes was pretty bogus. And Hamilton be damned, if Glover does not win the choreography award and Roth the costume design statue, there is no justice, just a mindless across-the-board-vote for Hamilton.

By virtue of its top-drawer cast and its bottomless budget, it simply cannot be as effective on tour or in regional productions no matter how strong the material, so catch it this summer before McDonald leaves. 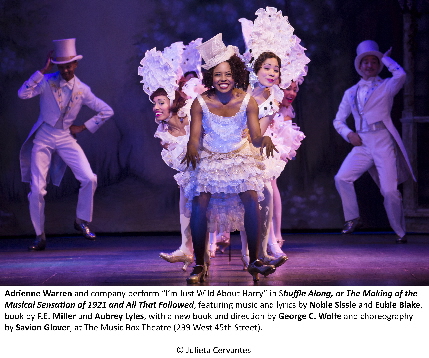 To read our review of The Father, click here.

To read our review of Bright Star, click here