Report From New York: The Bridges Of Madison County Is Surprisingly Lovely, Not Syrupy 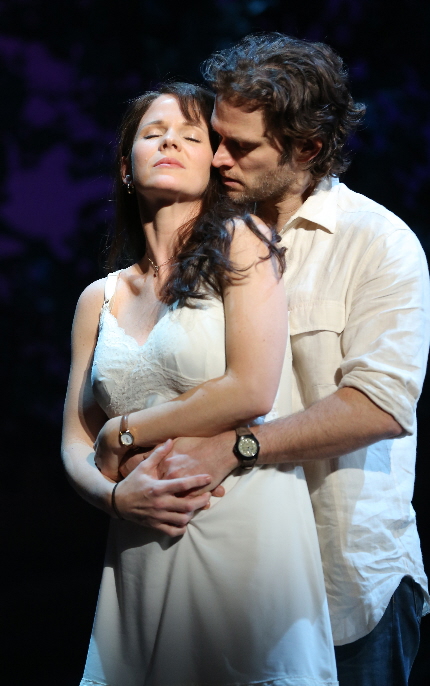 Hot enough for you? Kelli O’Hara and Steven Pasquale clinch in The Bridges of Madison County / Photo by Joan Marcus

We’re back from our semi-annual trip to New York to scout out productions you might want to see (or not), shows that might tour South Florida and scripts that might be worth reviving in our regional theaters. We will run them over the next few weeks before the Tony Awards, interspersed among the local reviews and features.

Three other shows that produced Tony nominations (The Glass Menagerie, A Night With Janis Joplin and A Gentleman’s Guide To Love and Murder which is still running) were reviewed by us in passing a few weeks ago in an article at http://tinyurl.com/omrov6m

Tone in a work of art is a hard quality to define, let alone describe. But in most theater endeavors it is the difficult-to-recognize element that either sinks a challenging piece or elevates it into a cohesive coherent experience.

The craft and sheer alchemy that achieves this overarching element is what critics and patrons usually mean when they refer to “theatrical magic.”

This is the secret behind the tragically soon-to-close Broadway production of Jason Robert Brown’s lovely, heartfelt and thought-filled musical, The Bridges of Madison County.

This production and the theatrical reimagining of the raw material strikes just such a tone of compassion and complexity that is virtually alien to the Harlequin romance/Lifetime Movie of the Week sensibility of the novel and, to a lesser degree, the film. The last thing it feels like is a sudsy wet dream although these are undeniably sexy protagonists.

While this production benefits immeasurably from the central performance of Kelli O’Hara and her expressive soprano, that tone is set by Brown, librettist Marsha Norman, skilled designers and above all the molding and melding by director Bartlett Sher.

The tone and the theme delivered with joy and gravitas are aching regret at being forced to make choices in life, and savoring the consequences while cherishing what was lost.

But Sher, Brown, Norman and company posit a separate peace by embracing one choice and then shelter memories of those fleeting excursions. It doesn’t exactly endorse infidelity in the pursuit of a fully-realized life, but it doesn’t punish it or disrespect it either. At the end of the show, the heroine does not rue staying put nor the affair that filled the empty chamber in her soul no matter how briefly.

The show closing May 18 at the Gerald Schoenfeld Theater is based on Robert James Waller’s 1992 bodice ripper about Francesca (O’Hara), an Italian war bride whose GI brought her back to raise a family on his farm in Iowa. Years later in 1965, when the hubby and their two kids go to the state fair, wandering photographer Robert (hunky soulful Stephen Pasquale), asks her directions to a bridge he is supposed to shoot for National Geographic. Sparks, as they say, fly and they are drawn into a torrid affair for four days. But although he asks her to escape with him, she opts for her current life.

But those who looked down on those iterations will be happily surprised at how the theater team has preserved the crowd-pleasing romance, but said something more profound about the human experience.  To begin with, this is Francesca’s story, not the couple’s. As my seatmate Susie Edgerley pointed out, Francesca fills the role that straitjacketed society usually assigns to the man: She makes the decisions at every turn.

Among the other changes, Francesca’s family plays a much more visible role including her husband Bud (Hunter Foster) and kids (Derek Klena and Caitlin Kinnunen). Similarly, the community of Winterset plays a more active role, staying on stage most of the time watching.

Norman and Brown do not mock the Midwesterners or their lives; in fact, they honor the Iowans’ willingness to support each other in times of need. The only false note in their depiction (has anyone here but O’Hara the Oklahoma native actually lived in the Midwest?) is that the community unreservedly embraces Francesca when in reality, there would always be the tiniest bit of distance toward someone not born and raised inside their county.

We musn’t go another paragraph without shining the spotlight on O’Hara whose has just received her fifth Tony nomination for her performance as Francesca. I’ve been in awe of O’Hara’s natural talent and acquired skill for over decade, but her evolution keeps charting ever higher. Usually, she owns me within the first ten minutes of opening her mouth, but here with a score finally tailored to her operatic training and her naturalistic acting skills, she had me and the entire audience within the first ten seconds.

Whereas the book could spell out the character’s inner thoughts and the movie had closeups, O’Hara has to labor invisibly to make the audience feel what Francesca feels even when she is unaware of it herself. Of course, she does that with one of the best voices in musical theater today – someone who understands how to act through singing.

Building on the work of Brown and Sher, her Francesca is both unfulfilled yet settled. She has put down deep roots in this alien soil but they are not in there very solidly. O’Hara and Sher do a brilliant job of making Francesca’s sideways slide not only seem credible but such an inevitability of nature that it is forgiveable. She brings an intelligence and tamped down spirit that seems like a bloom unconsciously aching for water. Visually, she wears a brunette wig to cover her blond tresses– tied up until Robert beds her – but O’Hara comes by that cornfed beauty naturally.

Pasquale, best known for the TV series Rescue Me, has honed his chops in numerous theater projects. Tall, hunky and much younger than Eastwood, Pasquale exudes the sense of a soul lost and searching for something he cannot name. He creates a three-dimensional character, not a Fabio stand-in. Pasquale, too, has a strong tenor capable of tenderness one moment and blowing out the back of the theater the next.

Together, their voices soar and intertwine like hawks riding the wind over the prairie in such stunning duets as Brown’s goosebump-inducing “One Second and A Million Miles.”

Bridges is not a perfect musical and its imperfections probably robbed it of a best musical Tony nomination. Norman and company intentionally wanted to make Francesca’s stakes impossible to dismiss lightly, so her stolid husband and squabbling children get far more stage time as they travel to the state fair to show off a steer – and they phone home inconveniently. They all get their own numbers and the whole bloody show stops for a country-and-western tub-thumping jamboree number. This dilutes the focus on the lovers.

A smarter call combines the past and present as the two protagonists begin to bond over dinner. Robert’s ex-wife (played by Whitney Bashor) is shown still in his imagination singing a gorgeous lament “Another Life” which shows beginnings and endings at the same time. It also makes flesh Robert’s backstory which the character is loathe to discuss.

On the other hand, the creative team has made that ingenious choice to depict the close-knit supportive community as an onstage factor throughout. It reminds us what Francesca would lose if she left – as well as amping up the possibility that the affair might be discovered by neighbors.

Brown (Parade, The Last Five Years, 13) has produced arguably his finest marriage of music and lyrics, which another critic accurately called “ravishing.” The Tony-nominated score is romantic, but not in the syrupy sense, but in the tender excavation of genuine feelings – an aural recreation of the joyful fantasies we nurture in our secret hearts. There is an off-beat fluidity to many of the songs, which blend a string section with solo piano and guitars, masterfully orchestrated by the composer– the source of another Tony nomination for the show. Some songs are rapturous, ripped from the characters’ hearts. Some have a distinct but blended country-western sound.  This is a CD or download to go out of your way to buy.

Norman is a proven master from the play ‘night mother to the script for the musical The Secret Garden. Among her interesting choices here are to show in detail what happens to Francesca and her family after she declines to go with Robert. We watch as the troubled son straightens himself out to become a doctor, how the daughter marries and stays to run the farm as well as giving Francesca a grandchild, how the husband dies of a protracted illness, etc. etc. It can be argued that these scenes are anti-climatic in one sense, but they also justify Francesca’s choice. She lives a fulfilling life after Robert’s departure.

The creative team is also in fine form. Given a show about a photographer sensitive to the quality of light, credit is due the Tony-nominated lighting of Donald Holder who creates a score of emotional environments.

Producers have been quoted as planning to take the show on the road, we assume because the name recognition of the title will attract audiences. That didn’t work in New York where ultra-sophisticates wouldn’t be caught dead seeing something with its pedigree and where tourists kept Spiderman aloft for two years.  The test will be in casting: This country is awash in talent and nothing has been proven more frequently than how replaceable most New York stars are on the road or in long runs. But Pasquale is pretty darn good and O’Hara is an inimitable talent unto herself.

At the same time, don’t rule out a locally-produced production in a few years although it will require a lot of talented people playing at the absolute top of their game to achieve that tone.

To see many photos and videos, visit: http://bridgesofmadisoncountymusical.com/
To read our other reviews of New York shows:

To see clips of all the Tony-nominated shows, click here.