Troupe Pitches To Over 50, But It’s Not Just For Older Crowd 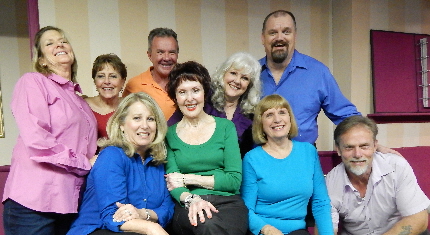 Truth be told, the thought of sitting through an evening of seven 10-minute plays that, according to the producer of a new theater company would be dedicated to plays for people over 50, didn’t seem entirely appealing.

In fact, Ellen Wacher’s curtain speech on opening night of Fifty Plus — A Celebration of Life As We Know It reiterated the mission of her new theater troupe, Pigs Do Fly Productions. She pretty much used the same verbiage in the press release regarding the new Empire Stage-based company. The audience should prepare for an evening that would “highlight the actor over 50 as a viable fully involved, full of life character.” Wacher even repeated the statistics that “100 million plus Americans are over the age of 50,” a population who are “under recognized” and who do not see themselves in theater that reflects their world and resonates with them.

With expectations of plays touting active senior citizens like some copycat of a chipper Geritol-induced couple or other subject matter, such as a fear of what might happen if left alone (images conjured of the white-haired woman in the “I’ve fallen and I can’t get up!” commercial),  Pigs Do Fly Productions and its mission statement imprinted some pre-conceived notions.

Pigs Do Fly Productions may want to rethink its pitch. While it does give actors and audiences of the 50-plus demographic a forum to create, it also sends a message that the presentation won’t appeal to those not yet ready for AARP. Fifty Plus – A Celebration of Life As We Know It isn’t just for those fifty or older; the humorous short plays, although sometimes predictable, presented life as we all know it.

Marjorie O’Neill-Butler, a local playwright whose agility for writing 10-minute plays has been recognized both locally and nationally, directed four of the seven plays, while Beverly Blanchette, a director with quite her own pedigree (she recently directed Plaza Theatre’s production of Dirty Blonde, is an actor, and is currently an adjunct professor of theatre at Palm Beach State College), helmed three, including one written by O’Neill-Butler.

Highlights of the evening included Theatre in Red by Joan Broadman and Poison Control  by Rebecca Gorman O’Neill (both of which could be produced in a show that has nothing to do with a Fifty Plus theme). Actress Janet Weakley was at her comedic best as Marilyn, the overly-controlling artistic director of a small theater that produces “fifty, two-minute plays in one evening to audiences no larger than eight,” while Sussman played the fall-guy as Jill, the eager beaver playwright who just wants her little play produced. Broadman’s Theatre in Red script was full of insider theater jokes, but was crafty enough in its farce to appeal to the masses: Marilyn suggests that Jill change her lead character to be a “black lesbian Muslim in a wheelchair” because those kinds of characters ensure grant money.

Poison Control with Caster as Charlie, a guy who believes he has overdosed on a substance and calls a poison control center, and Marsh as the control center operator, was another inventive script with a twist. It also gave Caster a forum for him to show some real believability with his droll and subtle nuances as a man fighting an addictive habit that crops up during his staycation from work.

With humor as a pre-requisite for Pigs Do Fly’s first production, all of the shorts were comedic in nature. Although Wacher said that she and her two directors plus a committee of South Florida community theater members “weeded” through 353 short plays, a few of the themes were repetitive – the singles bar scene cropped up and the couples who have let their sex lives wane after letting the realities of life get in the way was another.

The second play in the first act, Mike Vigo’s Kiss Her Goodbye, concerned everyman Andy (Troy J. Stanley). He had been married to the same woman for 30 years before his divorce and had only been out on three dates before joining his man-about-town buddy, Nick (Todd Caster) at the Libido Lounge. Nick has a rule that he never goes more than two dates without sleeping with a woman. Tonight’s the night Andy decides his intelligent nice guy approach is getting shelved for his next attempt at a pick up. Turns out, the jerk attitude isn’t what Laura (Kitt Marsh) is looking for — she’d would prefer the smart guy he left behind. Stanley, Caster and Marsh each make the most of the material, and created characters that had more nuance than the predictable script delivered.

The closing short of the first act, Mrs. Jansen Isn’t Here Now by Steve Korbar also had a pick-up bar as its setting. Chris (Mark Kroczynski) reveals to bar hussy Mary Margaret (Marsh) that he’s a former priest, which creates all kinds of fantasy excitement for both characters. A surprise twist near the end adds a wee bit of originality, but the premise isn’t new.

The opener of the second act, Spice by David Susman also suffers from the same dose of “been there, seen that” as a married couple (Kroczynski and Carol Sussman) try a technique to bring back their sex life recommended by their marriage counselor. Kroczynski’s sultry strip tease actually is the spice in this otherwise ho-hum short.

O’Neill-Butler’s short-play expertise showed through in Flight Fright about a woman who is afraid to fly and the two friends who come up with a way to get their anxiety ridden friend over her fear after a family crisis forces her to find a quick way from Miami to Denver. O’Neill-Butler is able to develop characters quickly in the evening’s peppy opener, which isn’t an easy task in the 10-minute play form.

The final playlet, How Nice of You To Ask, by Rich Rubin, once again finds Weakley pulling out all the stops as an elderly woman with a surprising past.

The quick changes of scenery are done inventively with bare bones chairs and tables being used and the actors from the previous short doubling as the stage hands to set up the scene for the next play. It helps to keep the pace brisk and also allows for minor lifting and moving done in the quick blackouts so as not be distracting. It is a purposeful and thoughtful approach.