Report From New York: Tootsie Has Own Vibe, Not Copy Of Film 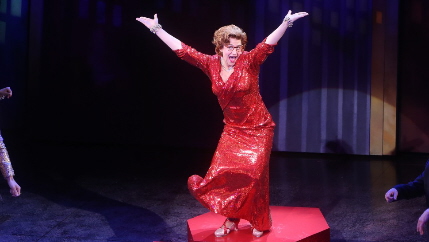 Turning a popular let alone beloved movie into a successful Broadway musical is far more difficult than it sounds; the landscape of the Great White Way is littered with outright failures as well as numerous efforts that paled compared to the original.

Film is a sui generis visual medium with different story-telling tools and tropes – often naturalistic even in fantasy — than the stylistic, verbally-reliant theater, not to mention the disappointment when fans of the film find the adaptation inadequate  in comparison.

But the creators of Tootsie, a Broadway musical at the Marquis Theatre destined to tour near you in a couple of seasons, made a brilliant and courageous choice. They abandoned the idea of faithfully duplicating the 1982 Sydney Pollack film starring Dustin Hoffman and written by Larry Gelbart and Murray Schisgal plus some tinkering by Barry Levinson and Elaine May.

They kept the basic premise of a querulous impossible-to-hire male actor Michael Dorsey who disguises himself as a woman named Dorothy Michaels to get a job, becomes immensely popular, falls in love with a co-star who thinks he’s a woman, and discovers a better person inside himself after seeing the sexism that women deal with daily.

They borrowed a few scenes (like the initial audition), salvaged a few iconic lines (“I was a better man as a woman…”) and kept a handful of relationships to avoid fans feeling cheated — and then they scrapped almost everything else. Their unapologetic liberation freed the creative folks to explore the same issues and situations with a different, fresh vibe that inexplicably feels updated in the #metoo era.

And it works. Undeniably. It’s not “great theater,” but it is thoroughly entertaining even if you loved the film through a dozen viewings.

A key change is that Michael/Dorothy lands in a Broadway musical not a television soap opera. The musical comedy sequel to Romeo and Juliet being rehearsed (with Dorothy playing the nurse) is hilariously awful with the primary conceit that Romeo dies but Juliet lives.

Composer-lyricist David Yazbek has a decent batting average: an artistic success in The Band’s Visit, an outing of variable quality but not half as good as the cinema original of Dirty Rotten Scoundrels, and a mediocrity in The Full Monty. In Tootsie, he has delivered a score of peppy penny-bright brassy tunes in a variety of styles including a tango. His lyrics range from banal clichés to ingeniously inventive.

Tony winner Santino Fontana (the Prince in Cinderella) makes an appealing lead. Scott Ellis is a skilled director with credits including a dozen revivals. The designers are all A-list Tony winners.

So it’s a talented creative crew. But the secret star of the show is the script by Robert Horn (Who? OK, 13 the Musical, Dame Edna, and Moonshine: That Hee Haw Musical) obviously working with the co-creative efforts of the aforementioned folks. His dialogue is Oscar Wilde witty one moment, and heartfelt the next.

His primary theme remains the injustice of a sexist society and a call for the empowerment of women – although the latter seems almost an accepted given in the ethos the writers’ vision.

But an interesting secondary theme examines the nature of ambition in the current climate. Both Michael and his co-star/love interest Julie are laser-focused on success – a conscious choice excluding much else and believing that total commitment is essential to success. Horn and Yazbeck don’t decry that paradigm as earlier writers might have done in a different decade. It’s only at the end of the evening that they advocate and depict our couple realizing the possibility and worth of balancing a career with a personal life.

Critics can carp rightfully that Michael doesn’t actually seem to learn anything or change his behavior until he loses the woman he loves. And there are a few too many solo ballads dictated by the Broadway show construction manual.

The performances are winning and no one tries to echo characters from the film. Fontana is a solid hand at engaging the audience although he won’t be hard to replace when the time comes. Dressed in a matronly dress, pearls, bright red wig and black glasses, Fontana is so good at inhabiting Dorothy with a different voice and mannerisms that it’s easy to forget sometimes that he is Michael – which is both a bragging point but also a shortcoming since we don’t always see Michael slowly registering the realization of what women are deal with.

The supporting corps has the necessary chops from the silver-throated Lili Cooper as Julie, Michael’s co-star on the boards who has pretty much given up on the prospect of romance, Andy Grotelueschen as his scruffy teddy bear of a roommate, Reg Rogers as the over the top sexist pig of incompetent director, veteran Charles Busch’s colleague Julie Halston as the producer, John Behlmann as the hilarious untalented beefcake actor relishing the taste of the scenery he’s chewing, and Michael McGrath in the severely truncated role as Michael’s agent.

But the memorable standout is Sarah Stiles in the Teri Garr role of Michael’s ex-girlfriend but close buddy Sandy who needs his support – and whom Dorothy aced out of the role in the play. Her frazzled manic deliver of a Gilbert and Sullivan-worthy patter song “What’s Gonna Happen” is a showstopping highlight.

This Tootsie stands on its own merits.

Note to parents: The show is filled with sexual references and blue language

One Response to Report From New York: Tootsie Has Own Vibe, Not Copy Of Film