Men On Boats — All Played By Women — Is A Goofball Pageant, Not A Feminist Manifesto 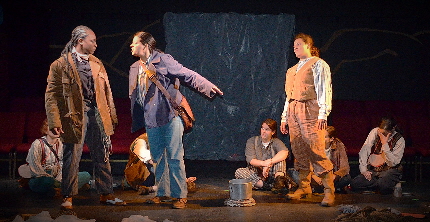 Allegedly, Men On Boats – in which actresses portray the heroic men in the first government-sanctioned expedition down the raging Colorado River in 1869 – is a proud affirmation that women are as courageous and adventurous as any man.

But the oft-invoked claim that this is the underlying message is nonsense, at least in this Main Street Players’ production. Its tongue-in-cheek tone is basically a declamatory sixth grade history pageant merged with the broad humor of a Carol Burnett skit, blue language, and rarely a wink’s acknowledgment of the change in gender casting. It works hard not to get caught being serious about much of anything. And despite its averred goals, it’s no more an adventure saga nor a feminist manifesto than a Saturday Night Live skit.

But here’s the rub: Whether you’re enraptured or bored or downright befuddled by Main Street’s vision, the consistency of the troupe’s execution under Danny Nieves’ direction shows they accomplished what they set out to do. Most of the audience Sunday loved it, especially somebody’s mother in the front row leading the laughter. Others kept looking at their watches. But credit where credit is due, these clowns invest as much energy and wacky mayhem as anyone could ask for.

No matter your reaction, this single underlying device wears out quickly and the journey goes on for two hours and twenty minutes including one intermission. Since we get the idea of cross-gender casting and the pageant trope within the first ten minutes, we have to wonder why playwright Jaclyn Backhaus felt compelled to dramatize most of the events of the trip as if some social studies teacher was going to grade the project on historical completeness.

Nieves’ direction presents the explorers standing in lines representing the four boats, paddling furiously, leaning side to side to maneuver the crafts around invisible rocks, tossing ropes to men/women who have fallen overboard. There’s a lot of yelling, a lot of yelling, over the sound effects of the white water rapids.  When the crew rests on shore at night, they stretch out across the stage in a single line at an invisible campfire looking a lot like DaVinci’s Last Supper.

Sometimes, the self-described “true-ish” account of history gives way to out and out goofiness, especially a scene where the members of the expedition seek the help of two Indians who are smarter and wilier than their visitors and converse in 21st Century vernacular.

For some inexplicable reason, it is clear that this would never play even as antic comedy if the cast were all male. Perhaps the irreverent spin on a PBS special is meant to poke fun of the full-of-itself mythic retelling of America’s past. (There was even a poorly received 1960 Disney movie, Ten Who Dared.)

We’ll grant the likelihood that the over-the-top / hammer-and-tong acting are part of the intentional vision, but it seems ham-handed even within those parameters. Only Krystal Valdes comes off well by throwing restraint to the wind with a manic but quite daffy characterization. What keeps the audience on their side is that the cast is having a hell of a good time and you’d have to be a stick in the mud not to enlist on their quest.  Nieves seems to have encouraged the actresses to embellish everything as thickly as possible at every opportunity with off the wall bits of business. But that means the rare moments meant to invoke heroism and admiration ring false.

Partisans of the company will likely say this critic “just doesn’t get it,” and that may be true. Or maybe their vision just doesn’t land with some people.

One Response to Men On Boats — All Played By Women — Is A Goofball Pageant, Not A Feminist Manifesto