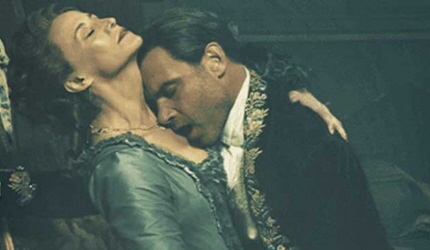 We’re back from our trip to New York to scout out productions you might want to see (or not), shows that might tour South Florida and scripts that might be worth reviving in our regional theaters. We have already posted another set of reviews including Holiday Inn, Heisenberg and Love, Love, Love

One of the toughest facets of the job for an experienced critic is putting other productions of a classic play in the background and judging a new outing on its own aims and merits – while still keeping other editions in mind as far as contest.

That’s especially difficult in assessing for the current revival of the brilliant examination of morality, immorality and amorality as well as sex, politics and sexual politics – Christopher Hampton’s 1985 stage adaptation of a little known 18th Century French novel.

The problem is that many of us who saw the original production in 1987 in London  (which moved to Broadway two years later) starring Alan Rickman and Lindsay Duncan, and directed by the recently late Howard Davies count it among the top 20 theatrical experiences of their lives. Indelible in the theatergoer’s mental scrapbook. It has also been undertaken in several film versions of varying success.

Now, in its third Broadway production at the Booth Theatre, director Josie Rourke, current artistic director of London’s esteemed Donmar Warehouse, has drafted the sterling Janet McTeer (as Merteuil ) and the acclaimed Liev Schreiber (as Valmont) for a new version of a morality fable that pitilessly indicts the pitiless manipulators of love and lust.

The bottom line is that a superb accumulation of talents have, indeed, produced a memorable stand-on-its-own evening as these pre-revolutionary aristos play an especially nasty game of emotional one-ups-man-ship using hapless souls around them as chess pieces.

The visual element is especially striking as the action swirls around a tactilely decaying drawing room. In a nice coup de theatre, we initially see it “today” covered with dropcloths and thick plastic sheeting so that when the characters first appear, it is as if they are ghosts returning to this hell to replay their sins.

All of the cast members under Rourke’s hand, especially the leads, exude intelligence and skill. The problem is that (and here’s where we violate the aforementioned rule of not comparing) several aspects are missing which are, indeed, in the script. Other pairings have been creatures not simply lacking a moral code, but knowingly savoring the restrictions that the lack enables. They innately believed themselves not simply members of a literally entitled class in the sense of aristocracy but a kind of German superman sense of being above the foolish strictures that come from being a member of the human race. They were not evil; they were beyond such a simple distinction. And sex and sensuality poured out of them at such a torrential rate that it was easy to see how each – and especially Valmont – were unknowing slaves to it.

None of that is present. Instead, we get these innately charismatic people circling each other and playing their heartless games. Both lead actors smoothly unreel Hampton’s cool literate verbiage and his deft adaptation of the novel which was told solely through the exchange of letters.

Rourke does a solid job staging, although in the climatic duel it should seem – and it doesn’t – that Valmont is knowingly committing suicide.

Palm Beach Dramaworks did a reasonably decent production of this late last year, but that edition and this one underscore just how hard it is to find that precise tone that can make this raw material a transcendent theatrical achievement.

The tragedy of the funny, moving and enlightening play Vietgone is that many regional theaters might shy from producing it because they would have to cast out of town to find enough first-rate Asian-American actors to populate it. This is a play that ought to be seen across the country.

Playwright Qui Nguyen brings a distinctly satirical irreverence to this amalgam of a boy-meets-girl tale except that it’s set in the mid-1970s as Vietnamese refugees are trying to adjust to the sensory overload environment of the post-war United States.

But the tale is told from the inside, allowing Nguyen to mercilessly lampoon American culture and its difficulty in connecting honestly with a new generation of immigrants.

Nguyen is speaking to the audience from 2016 (he even has an actor playing himself welcoming the audience and admonishing them to turn off their cellphones). He denies strenuously what we all know is true: He is recreating how his parents Quong and Tong met in a refugee camp in Arkansas although the story flashes back often to how these people and their friends and families escaped the fall of South Vietnam.

Everyone has plenty of emotional baggage if not literal luggage that make future emotional commitments problematic at best. Quang is haunted by the war and the family he left behind. Further, the prospect for reinvention in this seemingly anything goes zeitgeist is both opportunity and challenge. Tong is resistant to romance because she finally sees a chance to be a fully-independent human being.

But seeing things from the other side of the telescope is, to put it mildly, a turn-things-inside-out education to mainstream theatergoers.

This comes painfully into focus when Quang is on a road trip across the country in an attempt to get to San Francisco and take a ship back to his homeland. This man who committed his life to keeping his country free and who lost everything in the struggle meets a stoned hippie.

HIPPIE DUDE: “From the bottom of my heart – the bottom of my soul – I just wanna say – from me, from us, from America – we are really sorry.”
QUANG: For what?
HIPPIE DUDE: For what we did to your country.
QUANG: Um, there’s nothing to apologize for –
HIPPIE DUDE: No, man, there is. Look, I get it. Make love, not war.
QUANG: Is that right?
HIPPIE DUDE: I just wanted to let you know, it was an equally unpopular war here. All us cats that didn’t go over, we were working to make sure the war ended as soon as possible. You’re welcome.
QUANG: You’re an idiot.

Nguyen and director May Adrales savor the opportunity to bring highly theatrical techniques to the production. For instance, much of the narrative is relatively recognizable as “real life” as the characters converse with each other, usually concealing what they are truly feeling.

But interior monologues and soliloquies are done in glorious nimble hip-hop even though most of the play is set in 1970s.  You can cut it some slack by saying that the entire play is a memory play actually being told in the present and the past is being viewed through today’s prism. But frankly, the conceit is so entertaining that audiences shouldn’t mind the seeming anachronism,

As specific as Vietgone is to the Vietnamese experience, anyone in touch with their immigrant roots cannot fail to hear and see the resonances such as the plaintive, “I thought everything would be super-nice in America. That’s sort of what they advertised.” South Floridians with Cuban ties will certainly respond to the hero’s determination to somehow go back home even though what he seeks is no longer there.

One of the joys is how Nguyen teases the predominantly Anglo audience’s preconceptions such as having characters seem to speak in blunt pidgin English when talking to whitebread Americans. But when the Vietnamese characters speak to each other, their words flow in acerbic witty repartee, which the audience overhears as English. Even better is watching Americans flailing about trying to speak Vietnamese (again with the embarrassingly mangled words translated for the audience into painfully fractured English).

Other than the leads, the flinty but yearning Jennifer Ikeda and heartfelt conflicted Raymond Lee, the other actors play numerous characters, notably Paco Tolson who inhabits everything from a hippie to a redneck biker.’

Tim Mackabee’s set represents a lonely Midwestern-Southwestern highway in front of a billboard, but sparse furniture changes and Justin Townsend’s unusually evocative and varied lighting create a dozen different locations from the panic evacuation of South Vietnamese troops to confines of the resettlement camp. 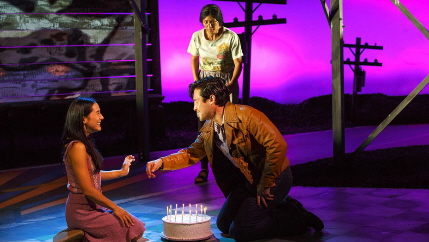 This entry was posted in Performances, Reviews and tagged Les Liaisons Dangereuses, Vietgone. Bookmark the permalink.