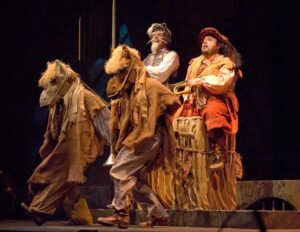 With its soul-stirring theme of “The Impossible Dream,” the musical Man of La Mancha is the ideal choice for Riverside Theatre to reflect on how it has triumphed over adversity.

Indeed, after a global pandemic interrupted two consecutive seasons at this top-notch Equity theater, it is both heartwarming and thrilling to see Riverside do what it does so very well — produce exquisite theater.

As directed by DJ Salisbury, this abundantly satisfying production boasts exquisite voices and bold visuals to tell the basic story of summoning the courage to follow one’s star.

The storyline is set in a prison dungeon in the 16th century during the Spanish Inquisition. With a “play within a play’ structure, it follows Don Quixote author Miguel de Cervantes being cast down into this prison along with his manservant and his trunk of theater props. Soon, a rough bunch of fellow prisoners threaten him and stage a mock trial. Cervantes pleads his case by taking on the character of Don Quixote and re-enacting the story about the knight errant who would battle windmills, which in his delusional mind were great beasts. He pulls from his trunk costumes, makeup and props to take on the role and gives supporting roles to the downtrodden prisoners.

Salisbury imbues the production with that rare mix of sensitivity and boldness — we see the dregs of humanity and at the same time bear witness to its nobility. Also a talented choreographer (Salisbury created that amazing ballet in Riverside’s Carousel last season), the production is filled with big movement and fine invention, especially in the brutal “Little Bird” scene. It moves solidly through tight pacing while at the same time allowing the pathos to rise, which builds to a most moving conclusion.

And yes, you’ll need to bring hankies, especially when Broadway performer Edward Staudenmayer sings. You are drawn to his Man of La Mancha and will catch your breath to “Impossible Dream.” But the love song “Dulcinea” will leave you a weepy mess. Staudenmayer, who has a long list of credits including Phantom of the Opera and cast recordings, is the real deal. Moreover, his tender portrayal of Cervantes/Don Quixote finds that winning mix of pathos and dignity.

Lianne Marie Dobbs portrays Aldonza, the prison’s roughhewn and cynical serving wench who Cervantes’s knight sees as Dulcinea, the chaste lady for whom Don Quixote fights. Dobbs is simply splendid in this role. Not only does she have a technically strong voice, but she delivers excellent expression to every line.

Edward Juvier shows quite the acting and singing range as a poor, wretched prisoner who, when given the role of the Padre, becomes a dignified being. He sings beautifully the irony-laced “I’m Only Thinking of Him” with Antonia (Caitlin Finnie), and the housekeeper (April Armstrong), who profess being worried about their uncle and master.

Tony Chiroldes is warm as Cervantes’ Manservant who he casts in the comic role of Sancho Panza and who explains his loyalty in “I Really Like Him.” Derrick Davis lends resonating power as Carrasco. David Benoit brings good dramatic presence as the Innkeeper. Wesley Slade brings a good touch of humor as the Barber.

Music director Michael Gribbin leads an excellent seven-piece pit orchestra which rightfully laps up the applause from an admiring audience as they exit. The music here is delivered so well that you will welcome those songs as they linger in your mind.

Wisely, Salisbury blurs the border between audience and stage by forgoing a curtain. Instead, as you enter the theater, you notice a stage mostly darkened but with murky details barely lit. It intrigues. Then, the house lights slowly dim and you hear Craig Beyrooti’s sound design of the plop, plop, plop of water dropping into the clammy dungeon. The lights slowly come up on stage as characters drift in, like those drops of water, marking time, expanding the sense of waiting, waiting, for the axe to drop.

Scenic designer Michael Schweikardt creates a looming purgatory, with a giant staircase looming to take one to what will probably be an awful fate. Lighting designer Travis McHale’s moody lighting amplifies the beastly maw. The array of dingy attire created by costume design Lauren T. Roark add to the desperation.

The script written by Dale Wasserman has been a continual favorite of theaters and audiences since 1965 when it first appeared on Broadway. It was inspired by Wasserman’s television play, I, Don Quixote, which had been written in the late 1950s. Years later, producers asked him to rewrite it into a musical, which opened in Greenwich Village in 1965. It moved to later that year on Broadway where it ran for six years. Before all that, Wasserman had written One Flew Over the Cuckoo’s Nest.  He also wrote screenplays, including an adaptation for The Vikings, made into a 1958 film with Tony Curtis and Kirk Douglas.

Intriguingly, although the music in Man of La Mancha is unforgettable, its composer, Mitch Leigh, never had another big hit. In fact, he made his living as a Madison Avenue jingle writer and was responsible for tunes to sell cigarettes and dog food. He also wrote the music to a popular Sara Lee commercial (“nobody doesn’t like Sara Lee”).

Just as remarkable is the fact that lyricist Joe Darion was not the first pick. Producers actually wanted poet W.H. Auden to write the lyrics. However, after Auden reportedly argued for a different ending, producers turned to Darion, who gave us:

“To dream the impossible dream
To fight the unbeatable foe
To bear with unbearable sorrow
And to run where the brave dare not go.”

Yes, this is a popular show. Since its Broadway debut in 1965, Man of La Mancha has been a favorite of professional, academic and community theaters throughout the country.  But you will want to see Riverside’s production which boasts splendid voices and strong visuals all riding on a current of hope for a better future.

“A version of this review also runs in VeroNews.com.”