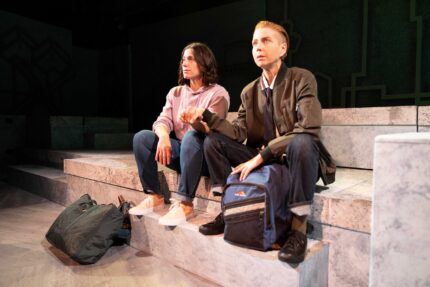 When it comes to the long-overdue acceptance of changing gender identity, cultures like ours—the woke ones, for lack of a better word—have all but demanded absolute enlightenment from their cis peers and the world at large: Get your pronouns right, no deadnaming, and if you utter a well-meaning miscalculation in your form of gender address, be quick to make amends.

This is all for the positive. But even for communities supportive of gender fluidity, actually living these changes can be far more difficult than acknowledging their correctness. Jon Brittain’s prescient, abundantly insightful play Rotterdam, which premiered in London in 2015 and which is receiving a marvelous regional debut at Island City Stage, captures the messy, shattering fallout from such a pivotal event, for the transgender person as well as their friends, families and lovers.

For the transgender person, they are finally living their truth in a world still largely divided among antiquated binaries. But for their life partner, their former bedmate and best friend may well be changing so quickly that the person they fell in love with has become unrecognizable.

This is the dilemma faced by Alice (Suzanne Ankrum) and Fiona (Autumn Kioti Horne), a lesbian couple, both expats from England living in the Dutch port city of Rotterdam. The daughter of supportive liberal parents, Fiona has been out and proud since 17, whereas the more apprehensive Alice has been closeted to her family for the seven years of her relationship with Fiona.

Rotterdam opens with Alice preparing to come out to her parents via email. It’s New Year’s Eve in less than 24 hours, a time of new beginnings, and Alice’s finger is poised to hit “send” when Fiona drops a larger bombshell, this one more nuclear in nature: “I think I’m a man.”

Henceforth, Fiona will identify as Adrian: a straight man in a woman’s body. He assures Alice that he is still the same person, that his love for Alice is unchanged, and that he’ll take the transition slowly—hormone therapies and more male-appropriate clothing at first. Any talk of gender reassignment surgery will be years away.

And yet, buoyed by an ecstatic freedom, Adrian begins to rapidly embrace his long-buried identity, bristling and even starting fights with anyone who misgenders him. Alice, meanwhile, finds herself increasingly stranded in the old paradigm—the paradigm she loved. Frank discussions of strap-ons, let alone the real McCoy, are as awkward as they sound. Alice, after all, is attracted to women; she doesn’t want to be near one of those things. She is put in an untenable position. To be anything but 100 percent supportive of her brave partner is to sully, perhaps even impair, Adrian’s journey. And yet to continue their relationship as it was would be denying her own identity as a lesbian.

Shows like Rotterdam are why theater exists—to glean new insights from such impossible squaring of circles—and Island City’s production is as instructive as it entertaining, as funny as it is harrowing. Michael Leeds directs a first-rate cast toward revelations that are honest and unsparing.

To watch Horne, who identifies as nonbinary, transition from Fiona to Adrian, is to experience a MasterClass in sensitivity and nuance, as their voice, demeanor and posture evolve in degrees so granular they are barely noticeable. They are a woman, then something in between, then very much a man, so much so that when Horne sports a dress in a desperate attempt to appeal to Alice late in the play, the visual is absurd. (In fact, I was struck, from the play’s outset, at how much Horne’s makeup and styling in this production resembles David Bowie, perhaps western culture’s ultimate gender-fluid chameleon. Whether this was an accident or by intent, it’s a welcome conjuring.) Horne delivers a performance of uncommon guts and vulnerability, one that leaves everything on the stage.

If the play is foremost a study in Adrian’s self-actualization, it also chronicles Alice’s self-determination, and Ankrum fully, movingly realizes the character’s own path forward. Ankrum embodies Alice initially as a bundle of nerves, uptight and un-confident in the embrace of her sexuality, and the resolve she eventually discovers within herself is bracing to watch.

The production earns solid support from Robert Koutras as Josh, brother to Fiona/Adrian and ex-boyfriend of Alice; like so much of life, it’s complicated. An amiable presence, Koutras leans into his role as jointly supportive peacekeeper when the two people he loves find themselves at loggerheads. Newcomer Abbie Fricke, a soon-to-be theater graduate from Lynn University, rounds out the cast in her professional debut, which you’d never guess from watching her confident and convincing performance. She plays Lelani, a libertine 21-year-old co-worker of Alice’s who seeks to take their relationship to a more intimate level, and whose invitations to explore Rotterdam’s nightlife help expand the older woman’s perspectives. From her faultless accent work as a Dutch local to her astute comic timing, Fricke should have a bright future in the Florida footlights.

Rotterdam is a lengthy work, exceeding two hours with intermission, but under Leeds’ direction, it never lags. His elegant pacing ensures scene changes are smooth, even liquid in nature. They are buttressed by Robert F. Wolin’s economic set design, where abstract surfaces become workstations, restaurant tables, beds and rooftops following swift and efficient adjustments. Something like a stenciled Rotterdam skyline looms behind the actors, evoking the playwright’s carefully chosen location.

The gift of Brittain’s vital play is its universality in approaching a subject that used to be a third rail in popular entertainment. But it’s called Rotterdam for a reason. The way the characters describe it, the title place is a port city that’s drabber than Amsterdam, a place of transience and yet whose characters have become sad fixtures—lost in translations and stuck in transitions. Perhaps their only way forward is to enter uncertain waters and hope for favorable tides.