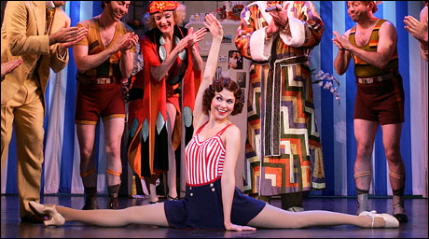 Sutton Foster in the Broadway production of The Drowsy Chaperone

The Wick Theatre in Boca Raton hopes that musicals connected to popular films will be an alluring draw in its fifth season, based on the three of the five titles it announced this week.

But the season also includes a hilarious comedy calculated to appeal to its mainstream audience’s taste plus a revue of Jerry Herman music.

The Drowsy Chaperone (Oct. 19- Nov. 12) The winner of five Tony Awards, including Best Book and Best Original Score, this hoot is a loving send-up of the Jazz Age musical. A lonely nerdy aficionado of 1920s and 1930s Broadway musicals plays a record of one of his favorites in his small apartment – only to see the show come to life before him. The result is a delicious satire of theater tropes with production numbers and silly comedy.

A Wonderful Life (Nov. 24-Dec. 24) This little known musical is based on Frank Capra’s beloved classic film It’s a Wonderful Life, written by the Pulitzer Prize and Tony award-winner Sheldon Harnick (Fiddler on the Roof) and Grammy and Emmy Award-winner Joe Raposo (numerous PBS children’s shows).  Written in the mid-1980s and performed in regional theater several times afterwards, it show never made it to Broadway because of problems obtaining the rights. In 2005, it was performed in New York as a star-studded benefit for the Actors Fund of America and then performed in more regional theaters including the Papermill Playhouse.

Brigadoon (March 8-April 8) This rarely revived musical has one of the loveliest scores in musical theater by Alan Jay Lerner and Frederick Loewe (My Fair Lady). The story follows two Americans lost in the Scottish highlands who stumble upon a town that disappears into the Highland mist and returns for only one day every one hundred years. When one of the visitors falls in love with a local woman, the story becomes one of love and faith. The music includes “Almost Like Being in Love” and “The Heather on the Hill.” Unlike the previous two titles, this one was a stage show initially and later turned into a movie musical with Gene Kelly and Cyd Charisse.

Jerry’s Girls (April 19-May 13) A musical revue celebrating the works of legendary composer (and part-time Miami resident) Jerry Herman. Among the shows providing source material Hello Dolly!, Mame and La Cage Aux Folles (all three of which have been produced at the Wick).

This entry was posted in News and tagged The Wick Theatre. Bookmark the permalink.