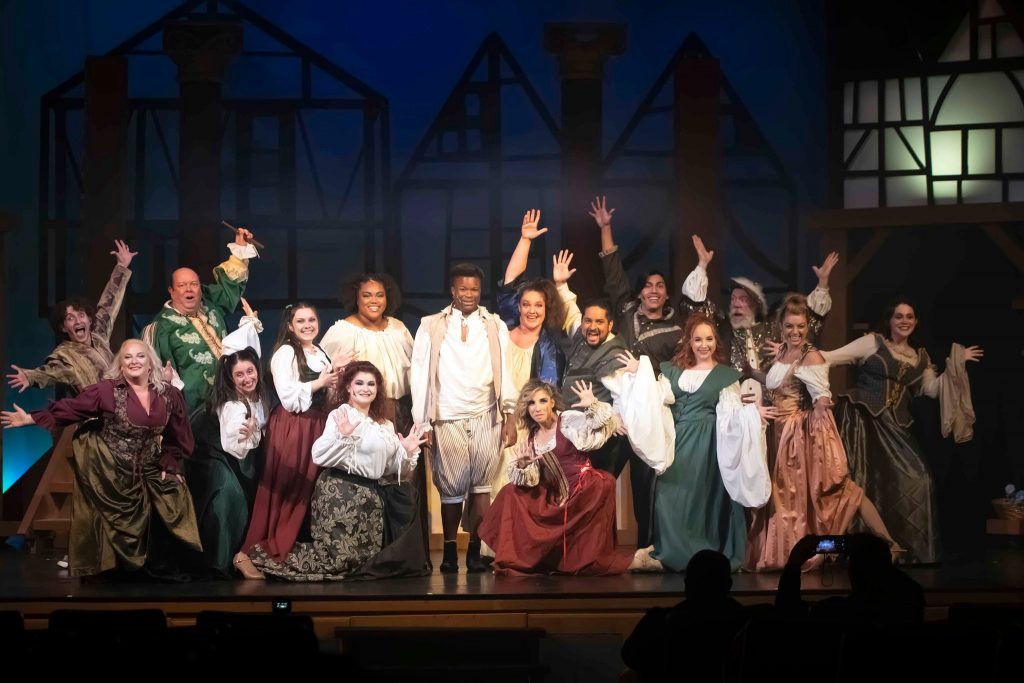 Hoot: (noun, Amer. slang)  (1) A comedy best described as broadly funny or supremely silly or wildly farcical or all three at the same time. (2) The sound an audience makes seeing such a comedy (3) The Pembroke Pines Theatre of the Performing Arts production of the musical Something Rotten.

If there is a corner of Heaven reserved for musical comedy devotees, likely one stage is rotating The Drowsy Chaperone, [title of show] and, as proven by this production, Something Rotten.

But you don’t have to know that Sondheim and Andrew Lloyd Webber share the same birthday to adore the send-up of musical comedy tropes melded with an equally wicked spoof of Shakespeare.

Literally every few seconds there is an insider joke about the Bard or musical comedy embedded in the dialogue, staging, choreography, sight gags, even the notes of the score itself.

But even those benighted souls who wonder how normal people can break into song in the middle of a scene will be entertained by this evening in which a 1,000-watt grin glows from the parties on both sides of the footlights.

In 1595 London, struggling playwright-performers Nick and Nigel – the Bottom brothers – are constantly outshone by the reigning rock star of theater, their former colleague William Shakespeare. One of the many bawdy lyrics, this one about  about the brothers’ envy  goes “Don’t be a penis; he’s a genius.”

This leads to an ever-escalating production number extolling the specifics of this revolutionary concept. There must be witty nods toward, who can count, a hundred musicals mashed together in the space of 7 minutes and 48 seconds. For instance, Nick says the concept sounds miserable. Nostradamus answers, “I believe it’s pronounced miz-er-ahhh-bluh.” In the space of a few seconds, the cast conflates The Music Man, Seussical and a half-dozen other iconic titles, later falling to their knees to imitate the orphans scrubbing the floor in Annie. to seven notes of “It’s a Hard Knock Life.”

When Nick learns his wife is expecting a child, he secretly gives the family’s life savings to Nostradamus to predict Shakespeare’s greatest achievement in the future, hoping to co-opt it. The soothsayer hazily suggests something called, what is it, ah yes, “Omelette.” 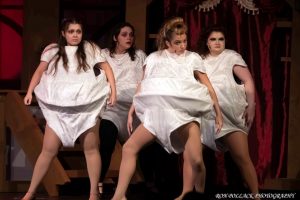 You didn’t believe me?

Nick forces his poet brother to collaborate in a full-fledged musical impregnated with references to breakfasts with Danish and including a dancing ensemble capering inside giant egg costumes.

Meanwhile, Nigel falls in love with Portia, the lovely daughter of a judgmental Puritan who, of course, forbids the poetry-loving couple from meeting. Yes, many of the characters’ names will find their way into Will’s future works including Shylock, a Jewish moneylender who wants to invest in the Bottoms’ show.

The delightfully indulgent meta-script by Karey Kirkpatrick and John O’Farrell, plus music and lyrics by Karey and Wayne Kirkpatrick is a smile from beginning to end with much of the humor reliant on anachronisms that satirize how far we’ve come in four centuries – and how little things have changed.

There are a few quibbles, primarily that with words so crucial to the humor, some actors do not enunciate clearly.  But any time you can see a large ensemble tap dancing in knee-high boots, you can forgive a lot. And performing in this huge high school-like auditorium with “challenging” acoustics, sometimes the digital orchestra drowns out the performers on stage.

Director Geoffrey Short and Assistant Director Del Marrero are clearly having as much fun as the cast and the writers, investing the proceedings with a barrel of comedy bits. Granted, some of the timing wasn’t quite perfect in the delivery of some lines and the whole thing lacked a bit of the pizzazz we saw in the New York and tour versions. But part of it might be that the shamefully small opening night audience took a while to give the actors the performance nourishing feedback that had been earned. Musical director Anthony Campsis has ensured the company sings with enthusiasm.

But start the kudos for the cast. Ben Sandomir as Nick has been a sort of under-the-radar Class A talent locally who companies should be casting at every opportunity. While he looks like and can perform as a straight forward leading man with a sonorous voice, here we get reminded that he has precision comic timing (Veronica’s Position) and can even tap dance.

Matthew Korinko, co-founder of Slow Burn Theatre Company and creator of a half-dozen memorable roles, is terrifically daffy and leads the showstopping number “Musical” as a Nostradamus who is as baffled by the future he describes as everyone around him.

Bob Ruggles makes a handsome Will preening and posing, but 80 percent of what he sings is drowned out by the band or is not enunciated very well.

Also worthy of praise is Sara Grant as the devoted wife Bea, and Shalia Sakona who has a gorgeous voice as Portia (ironically, she is a lawyer in real life).

So, an asterisk: For 20 years or so, PPTOPA has been a popular and ambitious community theater staging serious plays, large cast musicals and Gilbert & Sullivan classics often with a live orchestra. Its reputation has been of varied quality: some mediocre work common to earnest community theaters, some productions with an artistic or entertainment quality inarguably equal to professional theaters. While it has mounted such challenges as Les Misérables, it has always had a limited budget that imposed some constraints endemic to community theater from casting to sets.

But it went semi-professional (in that several people are being paid and a few performers are Equity union members) in the 2019-2020 season. Over that short time, it has amped up the quality of its productions and Something Rotten is another clear step forward toward being a reliable source of entertainment. It’s really worth checking out this one.

Something Rotten  by the Pembroke Pines Theatre of the Performing Arts plays through April 10 at the Susan B. Katz Theater of the Performing Arts at the River of Grass ArtsPark, 17195 Sheridan Street. Performances 8 p.m. Friday-Saturday, 2 p.m. Saturday-Sunday. Running time 2 ½ hours including 20-minute intermission. Tickets generally $17-$34. For more information visit www.pptopa.com or call (954) 437-4884.