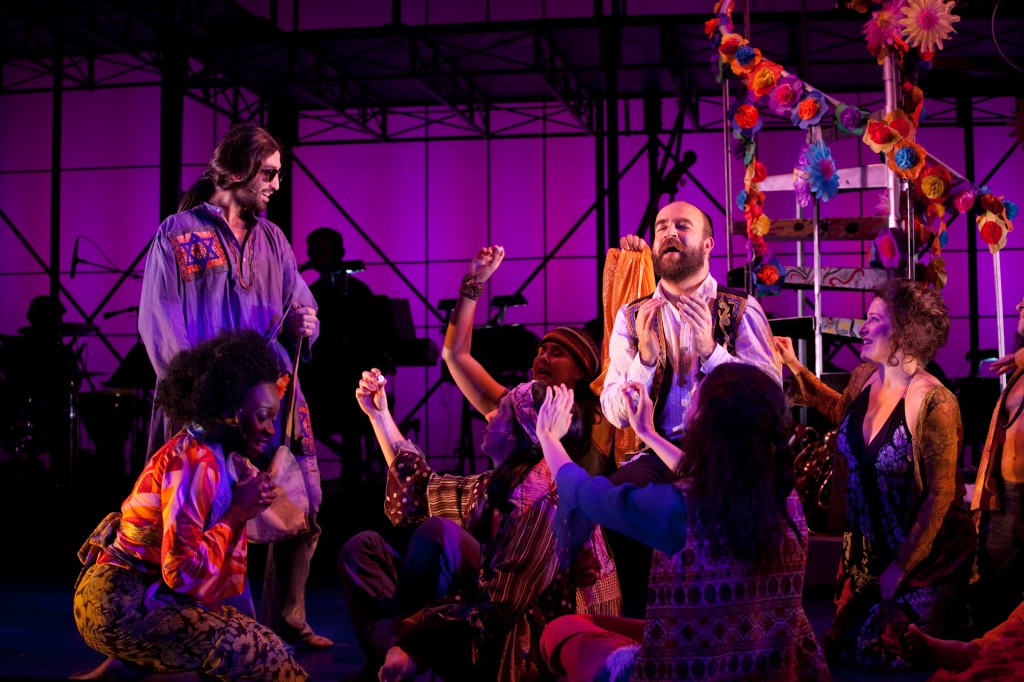 One of the most frustrating evenings in theater is The Mess. One moment, you’re moved by ineffable loveliness, the next you’re groaning at ham-handed ineptitude. Such is the careening quality of the new biographical musical Soul Doctor, subtitled The Journey of A Rock Star Rabbi.

The production currently at the Colony Theatre and moving later to the Parker Playhouse shuttles between the kind of infectious entertainment that has the audiences clapping with the music and later wanting to throw rotten vegetables at the stage.

The soul doctor of the title is not Ray Charles, but Shlomo Carlebach, the rabbi legendary among many 20th Century Jews for transforming Jewish music in America from stolid dirges to uplifting paeans focusing on the joy of religion.

The musical hops, skips and often trips over the bullet points in Carlebach’s life: a Holocaust refugee who rejected some strictures of Orthodox Judaism in favor of a humanistic, loving ethos. From the 1940s through the early-1990s, the composer built an evangelistic career reclaiming disenchanted Jewish youths and performing his songs in coffee houses and rock festivals from San Francisco to Moscow to Jerusalem.

That is, in fact, Soul Doctor’s primary asset: Carlebach’s melodies soar and swell like human emotions transmuted into musical notes. Orchestrator Steve Margoshes and arranger Seth Farber deftly created a lush score from 30 of Carlebach’s songs. The music has been married to a few of the rabbi’s lyrics, but mostly words that David Schechter wrote for this production.

What sinks this show is lead-footed scene after scene written by director Daniel S. Wise. Time and again, Wise gives us one-dimensional characters playing out clichéd situations with hackneyed pronouncements. The scene of Timothy Leary dangling hits of acid to tempt Carlebach’s flock of cartoonish hippie converts is particularly but representatively painful.  There is a distinct homogenized, sanitized feel of reverence to the book, such as chalking up his divorce to being on the road too much and giving away all his earnings to the needy.

Wise’s true talent here is a bit of skill at some funny quips. A record producer is courting Carlebach with the line, “You’ve heard of Peter, Paul and Mary?” to which Carlebach replies, “I don’t know so much about the New Testament.”

Just as destructive are Schechter’s lyrics that veer from occasionally evocative to frequently banal. One lyric has a lost soul in Washington Square appeal to Carlebach: “Doc, can you help me score some ‘ludes / So I don’t have to resort to glue.”

And then there’s Carlebach’s critic who complains in song: “You do the hora/ In Sodom and Gomorrah.”

But every time you’re ready to give up on the show, a Carlebach melody snares your spirit or a performance resonates with your core. For instance, Merideth Kaye Clark plays that lost soul who attaches herself to Carlebach only to lose him to another woman. Clark wraps her vibrant mezzo-soprano around the genuinely moving lament, “I Was A Sparrow” which contains Schechter’s best lyric. 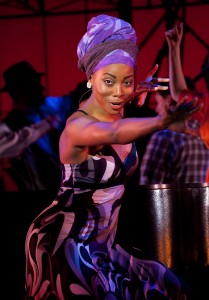 But most notable is Erica Ash who kicks the show up several notches every time she strolls onto the stage as Carlebach’s buddy, the famed chanteuse Nina Simone. Her appearance 45 minutes into the show, crooning a sinuous “I Put A Spell On You” (not a Carlebach tune) just underscores the mediocrity of all that came before. As an actress, she’s even convincing putting across Wise’s cardboard dialogue. In fact, the scene where the worldly club singer and the terribly shy Carlebach first meet, clumsily trying to bridge a cultural gap, is arguably the only point in the show where you’re seeing real people interacting in a real way. 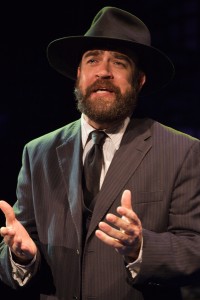 Another asset is actor Eric Anderson in the title role. Tall, bearded, with a quiet magnetism, gentle smile and shining eyes, Anderson not only has a stirring voice but you can see the pure joy of the music transfix his face every time he sings. His Carlebach visibly evolves from an introverted scholar who clasps his hands at all times into to an emissary of love with outstretched arms.

The most disappointing performance came from Gary Morris, a veteran country singer who won plaudits for his Jean Valjean on Broadway. Morris’ double roles as the elderly Shlomo and his father were so tamped down, so dulled that you wanted to feed him a five-hour energy drink.

Credit the producers with investing resources in this effort. They have a cast of 18 Equity actors, several with Broadway credits like Liz Larsen playing a stereotypical sitcom Jewish mother. A six-piece band is especially tight and versatile in its ability to play a wide range of musical styles. The set by noted designer Neil Patel is a metal framework behind some less impressive roll-on doors, but the lighting Jeff Croiter and Grant Yeager is evocative enough to smoothly differentiate among 37 scenes. Choreographer Gerry McIntyre also injects professional caliber values into the production.

This is billed as a pre-Broadway tour. It opened in May and played New Orleans in November. But while an older Jewish audience will forgive this show its multitude of sins, even cheer its virtues, this is no Fiddler on the Roof that speaks to many cultures; this show’s future is at best off-off-Broadway and a lot of JCC auditoriums.

To see promotional video of an earlier production, click here