Posted on December 6, 2016 by Bill Hirschman 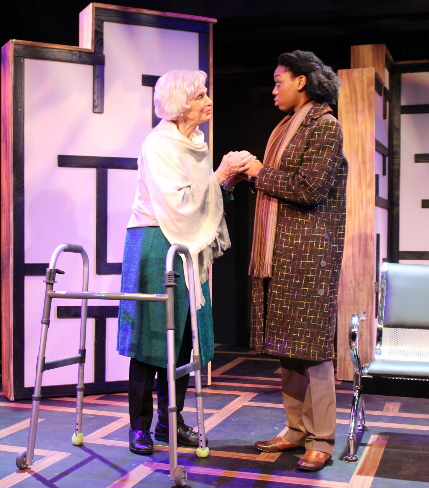 What fools these mortals be.
–Puck

If no man is an island, as John Donne suggested, then we seem to go through our lives failing to recognize how interconnected we are, either by specific tangible links we don’t see or just the universal conditions that we share, such as mortality.

Steven Dietz, one of regional theater’s favorite playwrights, sees with the wry compassion of an omniscient but impotent deity how human beings pursue their paths unaware of the interstitched pattern in the fabric of their existence.

With humor, poignancy and insight, Dietz portrays just such a patchwork invisible to its residents in his new play This Random World at Theatre Lab, the professional resident company at Florida Atlantic University.

Populated by a fine cast helmed by frequent Dietz interpreter Louis Tyrrell, this beautifully-limned entry stands as a moving thought-provoking evening that sticks to the mind and the heart for days afterward.

Like Arthur Schnitzler’s La Ronde, Random is a succession of vignettes between sets of two people. But the eight diverse characters in this universe are all connected. Some are related by blood, some by emotional relationships, but everyone is linked by a mutual acquaintance in the network – often unknown to those directly in the meetings depicted in each scene.

These near-collisions strafe so close that we can almost see sparks. They matter because all of the characters are undergoing emotional challenges that might be eased if they only could recognize that the person they are meeting has crucial information. Because of the aforementioned blindness or just cosmic random bad luck, these protagonists miss opportunities over and over to resolve their dilemmas.

In a hospital waiting room, four members intersect individually in one-on-one meetings without ever realizing their bonds. For instance, a young woman’s recent ex-boyfriend waits as she recovers off stage from a suicide attempt. Who is there that he trades pleasantries with? The young woman’s first boyfriend, the one she tried to kill herself over, who is there mourning the loss of a relative in the same building. They have no idea – and will never know – that they have both been the same woman’s lover. Such connections and coincidences never seem far-fetched in the absurdist world that Dietz has set the ground rules for; they are, in fact, his point.

Tyrrell has gathered a fine cast, above all, the peerless veteran Harriet Oser who invests vibrancy and dignity into a fiery mother. Her performance often makes you stop breathing in its beauty depicting the independent spirit of a senior citizen embracing the time left to her. Oser doesn’t get cast often, but we have never ever seen her in 22 years give less than an outstanding performance, even in material isn’t worthy of her.

But this fine ensemble is gifted with a superb script. Often it is drolly funny with finely-observed character humor as well as the inherent wit of this extended family that doesn’t know it’s an extended family.

But Dietz’s triumph is effortlessly sliding into the mouths of ordinary people brilliant insights into the human condition in the 21st Century.

The elderly lady counsels a woman struggling with unfinished issues with her late mother: “Forgive me, Rhonda -­‐ I don’t know you … but when we lose someone we get very sad and very angry. And we know everyone is watching. And so sometimes we pick fights and lash out -­‐ we start to behave our pain -­‐ we start to perform how bereft and distraught we are. And we call that feeling ‘grief.’ That is not grief. Grief doesn’t want attention. Grief is a hand on your chest. A hand no one can see.”

Later she says, “My sister and I took care of our mother. Worried about her, cared for her, wrapped our plans around her plans -­‐ none of which she needed or asked for, none of which she appreciated in the least. But, oh boy -­‐ it was great for us! It was the best excuse possible for why we managed to risk nothing with our own lives! We blamed all our cowardice on her. Oh the great things we could have done, but we needed to ‘be there for Mom.’ “

Or a woman finding a metaphor in a computer keyboard, “I want to be just beside my life. Not away from it -­‐ not in some completely different life -­‐ just a little to the side of it. Because maybe right beside my life everything makes sense. Maybe there … everything connects. Like you hold down the dead key and you press something … but if you don’t want that life, you press something else -­‐ you press the key right next to it -­‐ right beside it -­‐ and something brand new happens …”

While the script is filled with humor, the specter of death haunts the entire play, a reminder that the clock is always robbing us of the opportunities to recognize those connections.

Maha McCain plays Scottie’s loving but questioning hired caretaker; Cherise James plays her sister who has felt slighted by their late mother; Kelli Mohrbacher is the quavering angst-wracked Clair who has mourned the loss of her relationship with Tim for more than a decade; Matt Stabile plays the man who has just broken up with Clair, plus Dan Leonard in a surprising role that we won’t spoil.

It ups the ante as we realize how poorly these people communicate. Beth tells she will send Tim a URL link about something. People rely heavily on cellphones and some seemingly have difficulty interacting face-to-face

This is the second fully staged show for the new company employs skilled folks on the creative team. Panels set at right angles slide across the tiny stage can depict a maze of locations from Nepal to Kyoto to a fifth-rate restaurant with the addition of a few chairs, perhaps a jukebox or a makeshift shrine, and some deft lighting. (The scene changes are a tad slow).

Tyrrell premiered several of Dietz’s works at Florida Stage and he gave this script a reading a year ago before Dietz retooled it for the world premiere last spring at the Humana Festival. Tyrrell’s ability to slip into Dietz’s vision and rhythms are evident in his textbook control of the ensemble’s pacing and his skill at helping the actors mold credible performances of characters who are all both a bit offbeat yet all too recognizable.

Perhaps  Dietz thinks we are doomed to the cruelty of this blindness. Or perhaps, This Random World may simply be his call for us to open our eyes.

This Random World from Theatre Lab runs through Dec. 18 on the first floor of Parliament Hall, FAU Boca Raton campus, 777 Glades Road. Performances are Thursday through Saturday at 7:30 p.m., and Sunday and Saturday, Dec. 17 , at 3 p.m. Running time about 90 minutes with no intermission. Tickets are $35, and $10 (cash only) for students, faculty and staff with ID at the door. Call 561-297-6124, visit the FAU Box Office or https://www.fauevents.com. Tickets available at the door upon availability.