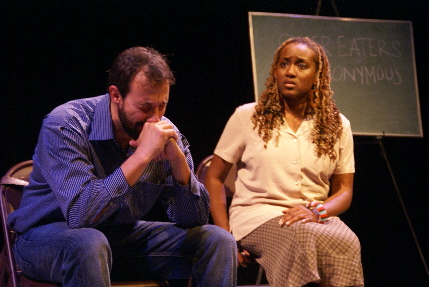 Sometimes when the company is engaging, it doesn’t matter whether the journey itself is a little bumpy or overly-familiar. Such is the power of winning performances by Christina Alexander and John Manzelli under Stephen Neal’s direction in New Theatre’s production on The Gospel According To Jerry.

The idea of “a rabbi and a gospel singer walk into an Overeater’s Anonymous meeting” sounds like the set up to a bad joke and, frankly, the well-intentioned and heartfelt script by Richard Krevolin and Irwin Kula has a full menu of flaws along with its virtues.

As in an intriguing but schematic pitch for a Lifetime movie of the week, the prickly damaged duo strafe, bicker and embrace like an inter-cultural Odd Couple. Each learns from the fractious interaction until they reach the inevitable Kumbaya moment – a mellifluous gospel-tinged duet of the Jewish mourner’s prayer, one of the most tradition-adorned facets of the religion for centuries.

The serious moments, including a fiery dorm room-style debate about race relations circa 2014, are leavened with a good deal of warmth and humor, plus some rousing gospel numbers crooned by Alexander.

But what makes it enjoyable is watching these actors bring some topspin to the proceedings. For instance, Manzelli’s exuberant Jerry blithely praises the benefits of riding a mountain bike for the problem-banishing focus it requires as much as the exercise. Alexander’s Nia dryly responds with the balloon-puncturing bluntness, “You don’t see a lot of black folks on mountain bikes, because – we’re not crazy.”

Although there is a plot of sorts, this is a tale of characters and culture clash. Jerry is a liberal-minded socially-conscious rabbi whose ebullient and kinetic exterior cloaks serious doubts about himself and his spirituality, due in part to issues with a mother sidelined by Alzheimer’s. Nia is a socially-shy choir director whose cautious reserve is punctured by the effusive Jerry who entices her to take more chances in her life with the exhortation, “Don’t try; do.”

Papered over by the actors’ charisma and geniality, the script seems to address the cause and nature of both characters’ emotional damage. But in retrospect, those crucial elements were not presented with a precision and clarity that make it possible to recount here.

Some of the script is pretty by-the-numbers. In trying to open Nia to taking chances, Jerry beguiles her into learning to exercise in a pool — although he balks when she tries to get him out of the shallow end of the pool and join her in the deep end of the pool. Clang. Clash. Crash. Ouch. And can you doubt for a second that this friendship will head toward romance?

The playwrights far more deftly depict the protagonists’ comparing and contrasting cultures that neither one knows as well as they thought they did. Jerry explains that the sing-song accompaniment to most Jewish prayers is sacramentalizing everyday life because religion is not about attending temple but how you live each day. To illustrate, he applies the traditional intonations to reading Nia’s to-do list.

Jerry bemoans the downside of assimilating into a culture that Nia quietly feels excluded from in the first place. He says, “It’s like the melting pot gave way to the salad bowl.”

The strongest scene in the play is that dorm room debate focused on which minority has the most call to be aggrieved. It delivers a forthright examination of how blacks and Jews view each other. The niceties evaporate as Jerry bemoans that blacks dismiss the Jewish contribution toward their civil rights struggle and Nia complains that the Jews’ success has had little effect on their socio-economic status. Charges of perfunctory white guilt and black anti-Semitism fly. On one hand, it’s a didactic argument seemingly dropped into this Neil Simon comedy. On the other, it’s enlightening to hear what each group believes, unvarnished by political correctness. But neither protagonist seems to increase the other’s understanding; they just air points of view.

Still, those bracing points are illuminating. Nia says, “We see Jews as whites who don’t go to church… .To a lot of people, Jewish success is a kind of insult; you succeeded but we did not.”

Alexander, who played multiple characters in her one-woman Hate! An American Love Story last year at Miami Theater Center, also builds different facets into Nia. Most notable, Alexander credibly depicts Nia’s initial suspicious coolness to Jerry, contrasted with the unbridled joy pouring from her face as she sings the Lord’s praises in church.

With his schedule crowded as a director, Barry University educator and as producing artistic director at City Theatre, it’s easy to forget that Manzelli has such solid acting chops, notable in several productions at Naked Stage, which he cofounded. Here, his Jerry is an affable, amiable mensch whose volubility and energy conceal considerable angst.

Director Neal paces the tidal feel of this quirky dance with a solid feel for the verbal byplay.

This entry was posted in Performances, Reviews and tagged Christina Alexander, John Manzelli, New Theatre, The Gospel According To Jerry. Bookmark the permalink.