Tears And Laughter Mark Riverside’s Over The River

Posted on February 6, 2016 by Bill Hirschman 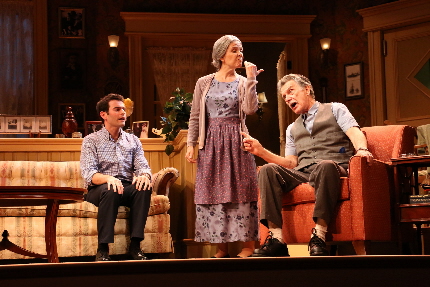 It might drip with sentimentality, but Riverside Theatre’s Over the River and Through the Woods will nudge out a few tears and win you over, due in no small part to the handsome and well-acted production.

Written by Joe DiPietro, the play is a heart-warming comedy set in June in the Gianelli home in Hoboken, N.J. It centers on Nick, a young man living in Manhattan and dedicated to spending Sundays with his four aging grandparents. Being the apple of their collective eye, Nick drops a bombshell when he announces he’s accepted a promotion and is moving to Seattle. At first shocked, the foursome rally their resolve to keep Nick close by.

It’s a simple gambit, but in the hands of Mr. DiPietro, it becomes a tapestry into which is weaved nuance, beguiling humor and poignancy. Indeed, as he did with I Love You, You’re Perfect, Now Change and the musical Memphis, the playwright embellishes an elementary storyline with rich character and believable action, allowing you to easily absorb them.

Love of family is the thematic motif in Over the River and Through the Woods, and it rings clear in the hands of the remarkable professional cast, all of whom have extensive list of credits. They each create fully realized characters filled with abundant love for Nick and just enough restraint to keep it all from being over the top.

We hear stories told by the grandfather, Frank Gianelli (portrayed with understated strength by John LaGioia); we can nearly smell the dishes of great Italian food served up constantly by generous Aida (exuding such loving grace in the hands of Kate Konigisor). Grandparents Emma and Nunzio (the funny and lively Marina Re, and the warm and wonderful Jon Freda) are sweet and romantic and will win your heart… and make you laugh out loud.

Throughout, there are the hysterical one-liners delivered by Nick (a most charming and affectionate Sid Solomon). “It’s Ethiopia hot” he says about the temperature his grandparents keep their home. A plot complication gets served up during a huge Italian feast when Emma, trying to convince Nick to stay put, invites Caitlin (sweet and winning Heather Botts, who was Nellie Forbush in Riverside’s South Pacific).

Separation is another theme in Over the River… One of the most significant moments comes when Frank tells the story of how his own father sent Frank, by himself when he was a child, to America. Frank considers Nick’s impending move and laments “Everyone leaves.” But, that seems to the be a family motif throughout the ages — Nick’s sister has moved to San Diego where she is raising her children; and his parents have moved to Fort Lauderdale “to live with a bunch of old people.” Indeed, even Frank and his wife left their parents. Director and scenic designer Allen D. Cornell slyly represent this theme by placing large replicas of sailing ships on high shelves on every side of the Gianelli home.

It is always such a delicious treat to enjoy one of Mr. Cornell’s scenic designs. Here, he creates a homey atmosphere that is both warm and welcoming and neat and clean. Photos of family dot the walls and shelves. A large “Last Supper” painting hangs over the kitchen door. Outside, a beautifully tended entry way, exquisitely lit by lighting designer Yael Lubetzky, becomes a good spot for private conversation. Adding to the visual appeal is Anna Hillbery’s costume design, which is spot on. We know these four grandparents do not spend money on new fashions. As with their home decor, they’ve had the same wardrobe for decades.

Yes, it does gush with melodrama. But the show triumphs because it is so much like our own lives. It keeps the audience engaged. Indeed, on opening night, when Nick argues his decision and blurts out “There’s nothing keeping me here,” the audience elicited a collective “oooo,” just this side of a “boo” — and Riverside’s audiences are pretty sophisticated. No doubt you’ll enjoy this show…and certainly the performances. You won’t see any better.

This entry was posted in Performances, Reviews and tagged Joe DiPietro, Over The River And Through The Woods, Riverside Theatre. Bookmark the permalink.