Posted on February 8, 2016 by Bill Hirschman 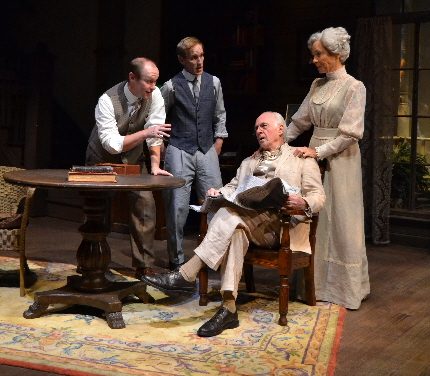 At the marrow of Eugene O’Neill’s masterpiece Long Day’s Journey Into Night is its compassionate sorrow that the ultimate human tragedy is the death of hope.

The final tableau of four devastated souls irrevocably adrift in the fog-bound damnation of inescapable failures and unconquerable frailties is an endgame so harrowing that the audience can hardly breathe.

It would be insufficient to praise Palm Beach Dramaworks’ incisive courageous production for its “performances” because director William Hayes and his superb cast go beyond naturalism and beyond stylistic theatricality into a world only found in theater where wounded souls can be both prosaic and lyrical.

This gauntlet of a production – with as accurate a title as ever invented – starts so slowly and proceeds early on with so little dramatic electricity that even knowledgeable fans of the work may fret whether it will ever get down to business. But Hayes and O’Neill want the play to start in an everyday place as recognizable as last night’s family dinner and end 3 1/4 hours later in the irreversible depths of hell.

It’s not the Tyrone family members’ specific predicaments that are shattering. It’s O’Neill’s profound empathy inherent in the cold clear observation that the results of past damage — unintentionally wrought by all-too-human fallibilities and sins — cannot be escaped or undone.

This is strong, strong medicine delivered in a protracted spiral descent, like watching fatal carnage in slow motion. So as first-rate a job as Hayes and company have delivered, it’s going to be too bleak and too deliberate for some patrons. Their loss.

Journey is the master playwright’s fictionalized but thinly veiled autobiographical exhumation of his dysfunctional family. This unsparing depiction was an exorcism when he wrote it in 1941-42, but it was cut so deeply out of his being that he insisted his wife not have it published, let alone performed until 25 years after his death. For still debated reasons, she had it published by Yale University three years after his 1953 death, allowed it to be performed in Sweden shortly thereafter and then saw it unveiled on Broadway to acclaim including the Pulitzer Prize and the Tony Award in 1957.

The play tracks one morning to midnight in the lives of the four Tyrones, each recuperating from their lives’ disappointments in their family home in a sleepy seaside Connecticut town in the summer of 1912.

Father James Tyrone (Dennis Creaghan) is a pompous semi-retired actor/producer who sacrificed a promising career in Shakespeare to make a small fortune as a matinee idol by endlessly touring a melodramatic potboiler.

His wife Mary (Maureen Anderman) is a former convent postulate who fell in love with James and spent her life in lonely hotel rooms following him on tour. While giving birth to their youngest son, Edmund, she became addicted to morphine and has been treated in sanatoriums for decades, but has always slipped back into a drug-addled haze. When the day begins, she has just returned from yet another hospital stay, and the family gingerly hopes that this time she has overcome it.

Edmund (Michael Stewart Allen), a newspaperman and would-be poet, has returned from travelling the world as a sailor. He has developed a persistent cough that Mary deems a summer cold, but which is later diagnosed as potentially fatal consumption-tuberculosis. Jamie (John Leonard Thompson), the oldest son, is a moderately successful Broadway actor whose life is dissolving in an intentionally self-destructive odyssey of alcoholism.

This grossly oversimplifies the guilt, pain, flaws, past mistakes, betrayals and boatloads of baggage these four bring into their shabby but genteel living room. But as the whiskey-fueled day wears on, the social niceties erode. The emotional facades crack and the four unroll an intensifying litany of recriminations accrued over the decades – goring the most painful vulnerabilities as can only be located by people who love each other yet who cannot forgive past transgressions.

In last half-hour of the ordeal, each of the Tyrones has a long final aria, which makes us view them more even-handedly, more clearly and with ever more sympathy. If any ADHD audience member had grown remotely impatient, the four actors here erase those shortsighted reservations with quietly bravura performances as skilled and moving as any you’ve seen this season.

The play has been revived on stage several times and filmed several times as well. One of Hayes’ production’s virtues is that it doesn’t echo or quote those other visions and performances, a significant accomplishment for actors trying to blank out audience memories of Jason Robards Jr. or Katharine Hepburn.

Casting Anderman is a major coup. Anderman is a still-active Broadway actress closely associated with Edward Albee’s work and is a part-time West Palm Beach resident. She starred in Dramaworks’ production of Albee’s A Delicate Balance in 2012. If you saw her in that part as a self-possessed patrician or spoken to her in person in Dramaworks’ lobby, you know just how convincingly and seamlessly she has created this alien creature.

Her Mary is a high-strung neurotic almost physically teetering on the precipice of the abyss of addiction. In an old lady voice that quavers and skitters at the top of her register, she verbally is in deep denial of Edmond’s true condition and her own, but Anderman makes it clear that Mary not only isn’t fooling her family, she isn’t even fooling herself. Anderman convincingly charts Mary’s slow drift from paranoia into complete dementia.

Creaghan has scored success after success at Dramaworks and this role adds to that string. His vain, flinty, remorselessly critical creation depicts James’ overweening conceit undercut by his private acknowledgement that he has failed his gifts and that his parsimoniousness is responsible for his wife’s malady. Creaghan’s bag of tricks has always included a hesitation in his speech pattern as if searching for a word, but in this role, the technique is completely appropriate. For much of the play, Creaghan’s James is a dialed back but unlikable curdled curmudgeon. But Creaghan’s reverie late in the play effectively summons up in us the compassion that O’Neill sought for him.

Thompson has shown an amazing range at Dramaworks: from the gentle mentally damaged preacher in Dancing at Lughnasa to the morally toxic Teach in American Buffalo. His permanently dissolute Jamie is his own sardonic vision, someone thoroughly disillusioned not just by his foray through the world, but by the history of persistent betrayals by the parents he loves. When his mother enters the room unsteadily, Thompson’s Jamie x-rays her with merciless examining eyes seeking the slightest sign that she has once again lied about her newest spate of sobriety. He plays Jamie’s penultimate scene as a beyond-the-pale drunken confession of operatic proportions. Normally in theater, a raging drunk scene fails miserably, but Thompson and Hayes pull this one off.

Allen’s Edmund starts out seeming jovial and optimistic, but he is a Tyrone whose artistic soul is well-conversant with the disappointments and cold realities. As O’Neill’s stand-in, Allen’s Edmund shows us the seeds of who would become one of this nation’s greatest writers. Like the others, Allen dives so deeply into the character that you forget he’s acting.

Carey Urban’s maid provides the necessary comic relief as the lonely Mary plies her with drink to keep her companionship when the men are out of the house.

The primary quartet of actors communicates a palpable chemistry reflecting the shifting alliances, the unspoken messages, the familial rituals and tropes forged over a lifetime. They illustrate convincingly a group who genuinely love each other and hate each other in the exact same moment.

Amazingly, O’Neill, Hayes and the cast deliver buckets and buckets of exposition without anyone noticing – a huge stumbling block to most theatrical endeavors. Every time someone brings up some past event, it is either venting their own self-disgust, or using it as ammunition to confront another.

All these performances and the superior visual and aural efforts have been shaped by Hayes’ deft hand (with the help of assistant director Paul Stancato). He usually moves his characters around the living room without calling attention to the staging. But in the final Jamie drunk scene, he has Thompson roam wildly around the room and across the floor. And yet, he also has the courage and confidence in his actors to often have them sit in chairs on opposite sides of a table and just tell stories – still keeping the audience’s attention.

The technical team, as always, delivers fine work, but the most notable is Donald Edmund Thomas’ lighting which reflects a gradual morphing as a hot day outside slips into half-illumination of night.

Journey is rarely done in South Florida; the last one we recall was Rafael de Acha’s version in fall 2003 at New Theatre. It’s the kind of classic theatrical Everest that few companies attempt down here and even fewer do as well as Dramaworks.

Note: The first section before the intermission is about 80 minutes; the post-intermission section is about 105 minutes. Gauge your activities accordingly. Also note the shows have an early curtain time.