Posted on February 5, 2016 by Bill Hirschman 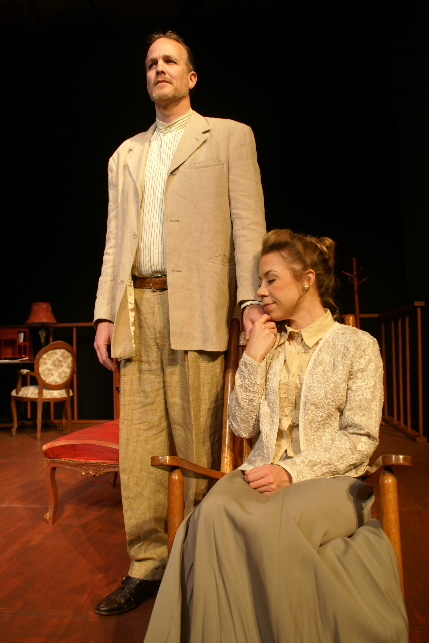 The world premiere of Miamian Sandra Riley’s Footprints at New Theatre clearly establishes the playwright’s deep love and extensive research into the early history of South Florida and the efforts of a real-life married couple to preserve its natural wonders over 35 years.

But theater is not a history lesson, even when taught through the prism of the lives of these loving creative souls who banter and encourage each other’s dreams, Mary Barr and Kirk Munroe, who were early bayside settlers in Coconut Grove.

Barr, in particular, was instrumental in creating a network of “Women’s Clubs” that enhanced the social and education institutions in the region, and then pioneered efforts to save the Everglades from developers.

But structurally, the play is hampered by Riley’s well-intentioned dump of boatloads of expository factoids and scores of period-establishing references. All of it is unloaded not in dialogue but in stilted pronouncements in which one person tells someone else something that the other person knows (sometimes even telling them what they did) so that the playwright can educate the audience.

But that’s not the real dramaturgical problem. By creating a play in which two married people simply talk to each other, everything, every action, every challenge overcome, every accomplishment, every dramatic struggle, everything happens off-stage and is related second-hand – again, when the other person already knows what has happened. This robs the play of any electricity or narrative drive.

The actors, God bless them, try to make these sound natural but it’s impossible. Instead, they often sound stilted and mechanical as if reciting classical poetry. The actors work hard to pull this off and they have some chemistry. Both convincingly show the decades of age as they approach Mary’s physical decline in 1922. Yet, on paper, the conversation seems a shade less like proclamations and the endless “and then you created the first….” So you have to wonder how much of this should be laid at the feet of the actors and director.

What does work are the efforts of Riley, director/dramaturg Ricky J. Martinez, and actors Melissa Ann Hubicsak and Clint Hooper to create believable soulmates whose determined pursuits are leavened by wry ripostes thanks to Riley. Riley provides plenty of familiar marital ego-deflating humor such as when Kirk protests that men don’t gossip. Mary fires backs, “Men love to gossip. They call it politics.”

The play opens in 1887 with the Munroes settling into the new home he has dubbed Scrububs. He is a book author and newspaper columnist whose topics include travel writing. She begins as someone keeping a journal, but soon becomes an essayist, speaker and activist.

The evening proceeds episodically with each scene separated by a few years and short interludes in which Mary and eventually Kirk utter fragmentary phrases that apparently are entries in their journals.

Early on, much of Mary’s efforts focus on creating a community improvement organization called the Housekeepers’ Club, the forerunner of the still-in-existence Woman’s Club of Coconut Grove, which inspired Riley in the first place. She then helps create a state-wide federation of such clubs.

The budding environmentalists fear for the natural world in their backyard and campaign for its preservation. Mary and her club create the first Florida nature preserve owned by women: the Royal Palm Park on Paradise Key – the forerunner of Everglades National Park.

He is affable and laid back; she is determined to make a difference regardless of the genteel sexist expectations of the period, making utterances like “I don’t have to be good, but I must do what is right.”

The lives of the couple intersect with bold-face names of the period – notably John Muir, Renoir, Flagler – but they are sprinkled throughout the script like name-dropping at a party – except there is no one here to impress except the audience. One is only referred to as Richard, which the old newspaperman in me recognized as the war correspondent Richard Harding Davis. In case, you are not sure what the period is, someone goes out of their way to cite the year or makes a point of mentioning the Spanish-American War or Prohibition.

The couple spars and spurs each other with a genuine affection that carries the audience through the evening. But the things they often tussle over – a dog, a chaste kiss, the construction of a clubhouse – are so minor that you wonder why you should care.

Martinez succeeds in keeping the very talky proceedings from feeling static by subtly staging the actors in motion much of the time around the single living room set.

While hardly subtle, the elegiac winding down of the play is addressed to future Floridians.

MARY: Do you ever wonder what our village will be like a hundred years from now?
KIRK: Everything changes, Mary. We’ll be long gone. It won’t matter to us.
MARY: I don’t care if I’m remembered. It’s the preservation of the foundations we’ve pioneered to build.

And later, Mary says in a farewell address at a clubhouse: “But our work is just beginning. I charge each and every one of you and all those who will come after to hold to our ideals as we forge the future. As long as this building stands and we are in it, those who treasure education, culture, community service, historic preservation and conservation of our natural resources will follow our lead.”

Footprints is one of two plays being presented in alternating rotation to celebrate the company’s 30th anniversary. The other is another two-hander, Franz & Albert, by the well-known local playwright Mario Diament. That show bowing later this week fictionalizes a meeting of Franz Kafka and Albert Einstein in a Prague salon.