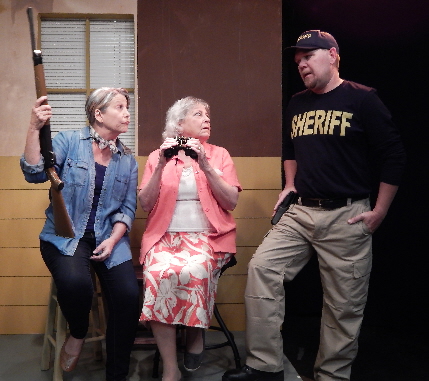 The Helen in Helen on Wheels is Helen Wheeler, a spirited, allegedly 70-something widow who speaks her mind and challenges anyone who crosses her as she continues to mourn her husband, who died two years before.

But Helen on Wheels, from Pigs Do Fly Productions currently at Empire Stage through March 29, is more than an amusing story about a feisty widow. This play by Cricket Daniel also looks at the devastation of losing a loved one, of moving on with your life and keeping your independence. This comedy fits well with Pigs Do Fly’s mission to produce plays that highlight people over the age of 50. Pigs Do Fly’s audiences already are familiar with Daniel’s work as the company staged her The Lost Virginity Tour last November.

When we first meet Helen (Beverly Blanchette), she’s in jail—a little matter of taking bingo winnings, a mild assault in a parking lot, a few charges. But the plucky Helen can’t be kept behind bars for long. Soon after she’s asked Sheriff Seth Magee (David A. Hyland) to fetch her a blanket and a cup of tea, her best friend Zona (Carol Sussman) uses a blowtorch—a birthday present from Helen—to bust her out of jail. This isn’t the first time that Helen has raised such a ruckus that she’s landed in jail, and the sheriff has little trouble finding her or her accomplice Zona, who happens to be his mother.

When she’s not out causing havoc in her town of Crockett, Oklahoma, she sitting at home, working on her obit because she doesn’t trust her son, Nelson, to do it properly, shooting birds from her front porch with Zona or waiting for the occasional beep from her microwave, which she believes is her late husband’s way of communicating with her.

Worried about her shenanigans, Nelson (Todd Bruno), an attorney, wants Helen to move 31 miles away to Tulsa, where he lives so she can be closer to him and, as she calls them, “her ungrateful grandchildren.” He’s also a bit worried that Helen may actually believe that his father’s ghost lingers in that microwave. But as Zona explains to Nelson, that microwave serves a purpose because grieving is a process and you live through it how you can, however long it takes. Helen has other ideas about where she should live. Her husband’s family practically built Crockett and he was the mayor for more than 20 years. Crockett is her home, plus there’s that beeping microwave. Dave Corey as Elmer, Helen’s would-be suitor, rounds out the cast.

While the actors seem invested in their roles, the first act lacked energy and, on opening night, some cast members kept stumbling over their lines. The second act ramps up the energy. As the production continues, the cast should grow into their roles.

Blanchette and Sussman clearly were enjoying their roles but a bit more flamboyance would show that their age doesn’t stop them from adventures. Though Blanchette poignantly nails her speech about missing her husband. “I don’t laugh in this house anymore,” says Helen. “The quiet is loud.”

Bruno shines as the epitome of the caring son, wrapped up in his own life and troubles but not too busy to be concerned about his mom. Hyland understands the humor behind his befuddled character; sure, he’s the sheriff but he’s a little awkward around Helen who keeps reminding him that she used to buy his popcorn he sold as a Cub Scout and wishes his mom and Helen were not so “Thelma and Louise.” The charming Corey, in his brief role, shows what a catch he would be.

Director Elizabeth Price (an acclaimed actress as well) keeps Daniel’s script churning with the actors constantly in play and seamless scene changes with the cast taking charge while remaining in character.

Ardean Landhuis’ set makes the most of Empire Stage’s intimate venue with three distinct areas—a comfortable, typical living room, typical, that is, if you have a rifle mounted near your sofa; a front porch and a bar area with that microwave and a bit of alcohol.  A wall cleverly turns into a jail cell and a park bench.