The Plot Escaped From Margaritaville, But Buffett’s Songbook Remains 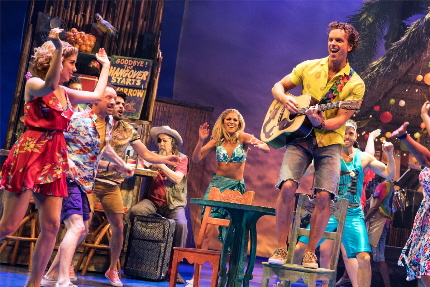 Escape to Margaritaville, the Jimmy Buffett musical at the Broward Center through Dec. 1, would work so much better as a concert version of the singer-songwriter’s infectious songs. Buffett’s songs are the quintessential music of Florida and the islands—imploring you, no, demanding that you kick back, grab a drink and make yourself comfortable and just enjoy being carefree.

Instead, the Buffett lyrics have been cut and pasted into bits and pieces, wedged and squeezed into a variety of scenarios to fit this typical boy meets girl, loses girl and, spoiler alert, eventually wins her back.

If you’re looking for a plot, better to keep looking for that lost shaker of salt as Escape to Margaritaville’s story is lighter than air.

Escape to Margaritaville depends on how much you like Buffett’s songs. And if you do, you’ll have a good time because, despite its myriad flaws, this Escape is fun.

Tully Mars (the charming Chris Clark) is the lead singer of a rather tight band at the popular tiki bar of the unseen Margaritaville hotel located somewhere on a never-named island. Don’t worry trying to figure out where this island is—it is never revealed. We know it is not Key West but suspect it is in the Atlantic Ocean as it is five hours from Cincinnati and has a volcano.

Tourists flock regularly to the rundown hotel to drink themselves silly and enjoy the beach. A new set of tourists arrive each week and that’s how long Tully’s relationships last. His girlfriends last exactly one week and if the girl du jour hints at a longer relationship, well, the ferry is waiting.

Then tightly wound environmental scientist Rachel (equally charming Sarah Hinrichsen) escapes from the winter of Cincinnati to Margaritaville with her best friend Tammy (the appealing Sarah Lynn Walsh). Tammy is to be married in a week to the jerk of all time Chadd (the appropriately smarmy Noah Bridgestock) and this is the friends’ bachelorette get away. (Tammy, never trust a man who reorders your wedding dress in a size smaller because he insists you lose weight because he can’t love you if you’re fat. Plus, never trust a man who spells Chad with two d’s.)

Tully is instantly smitten with Rachel who, at first, wants nothing to do with him because her first order of business on the island is to take soil samples for work. She’s working on a project in which potatoes will produce power. Tully, of course, makes it his mission to get her to relax and enjoy herself—and him. Meanwhile, Tammy is fighting off her hunger pains and her attraction to the not so bright but cute bartender Brick (the likable Peter Michael Jordan).

There’s also a one-eyed drunk J.D. (Patrick Cogan) who has a lot more depth than his constant look for that lost shaker of salt and who’s infatuated with Marly (Rachel Lynn Fobbs), the owner of Margaritaville. There’s also a bunch of dead insurance agents who let loose with a mean tap dance.

One doesn’t actually have to see Escape to Margaritaville to figure out how it all turns out, aided with the help of snippets of Buffett songs. The use of songs is predictable—you don’t put an already thin woman on a diet without working in Cheeseburger in Paradise, and it’s cleverly used. And you don’t mention a volcano without eventually using it. While a hurricane would have made more sense, Buffett, as my theater companion pointed out, didn’t write a song about a hurricane.

Still, the musical does include beautiful, emotional renditions of “A Pirate Looks at Forty” “He Went To Paris” and “Son of a Son of a Sailor.”

The book by Greg Garcia and Mike O’Malley features dialogue that is both amusing and predictable. “Work is a dirty word around here,” Tully tells Tammy. “If you say it again, we’ll have to wash your mouth out with tequila.” To which she quips, “Work work work work work work.”

The tiki bar set with beach chairs delivers a Caribbean vibe and the dancing is expected, though kudos to casting an ensemble that features men and women of all sizes and heritage. Costumes are the usual shorts, short skirts, bathing suits and island shirts.

A highlight of the opening night—not likely to be repeated—was a most welcomed appearance of Jimmy Buffett, barefoot and smiling, who led the on-their-feet audience in a rousing “Margaritaville” during the encore. Buffett gave this jukebox musical the right escape…finally.

This entry was posted in Performances, Reviews and tagged Broadway Across Fort Lauderdale, Escape From Margaritville, Jimmy Buffett. Bookmark the permalink.