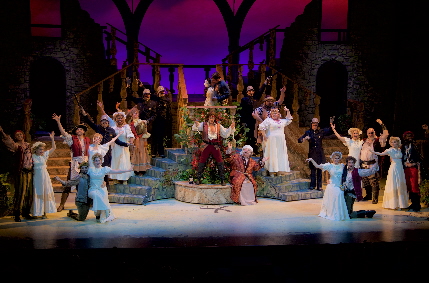 This may seem like a backhanded compliment, but it is meant with awe and respect: The most memorable aspect of The Wick Theatre’s edition of Gilbert & Sullivan’s The Pirates of Penzance is you can understand the bloody words.

The production has many other virtues: delightfully broad comedy staged by veteran Norb Joerder, a parade of Victorian Era costumes that are a hoot in themselves, first-rate soloists and an overwhelming choir-smooth ensemble, all molded by musical director Eric Alsford.

But because the cast foreswears overly-British accents and concentrates intently on enunciation, Arthur Sullivan’s satirical genius, from faux anthems to heartfelt love duets to the famous patter songs, emerges as clearly as in any G&S you’ve seen recently.

The farcical almost cartoonish tone is based on director Wilfred Leach’s 1980 reinvention for the New York Shakespeare Festival that moved to Broadway with Kevin Kline, Linda Ronstadt, George Rose and Rex Smith. But since G&S’ comic operas poked fun of the stilted conventions of grand opera and undeserving class distinctions, the odds are they would have joined in the applause at this somewhat looser approach than you’d find at the Savoyards.

Lots of collegiate and community companies love G&S’ works because the silliness of the script, the brilliant agility of the lyrics and the soaring melodic music will win over almost any audience. But this production with its skilled professionals quietly sports a polish that many other productions lack.

Like HMS Pinafore and The Mikado, the Pirates is meant to skewer unqualified people in positions of authority as well as the calcified social mores that have no root in real life. It’s no accident that the show subtitled “Slave of Duty” takes that sense of social responsibility to a ludicrous extreme, and that the “modern Major-General” is a gasbag who knows everything except military matters.

Briefly, the callow hero Frederic is about to turn 21 years old and therefore able to leave his indentured apprenticeship to a hapless band of pirates led by the preening ever-posing Pirate King. All too tender-hearted, his crew balks at pillaging any time their victims claim to be orphans. Although fond of his shipmates, Frederic is freed of that “duty” and now must pursue the socially acceptable “duty” to destroy them with a phalanx of policemen because society sees them as dastardly villains.

He falls in love with Mabel, one of nine lovely wards caring for their dotty self-important father, Major-General Stanley. But Frederic’s former nursemaid Ruth reveals that he is not really 21 because he was born in a leap year. And that changes his allegiance back again to the pirates in order to finish his apprenticeship although it will be 63 years hence. Still, Mabel promises to wait. Fortunately, Sullivan has a couple of other absurd surprises to right everything.

Joerder, who has staged this before, infuses the production with scores of little comic touches drawn from vaudeville and 1950s sketch comedy. But while the script has been tweaked, much of the verbal humor belongs to Sullivan including a prescient “who’s on first” routine over the similar sounds of the words “orphan” and “often.” But again, Joerder and Alsford have drilled the cast into making the words comprehensible no matter how lovely the melodies.

That score is pure operetta but with a wry wink at the over-the-top musical and lyrical flourishes that genre was known for.  Fortunately, the Wick cast a cadre of clowns who also have unusually strong voices. Alsford’s leadership is especially notable when he weaves a seamless aural wall for the breathtaking a cappella choir number for the entire cast near the end of the first act.

Sean McDermott’s Pirate King is a fine lampoon of a scenery-chewing matinee idol who should have swashed instead of buckling. He flourishes his sword through the air with abandon, unintentionally threatening to actually hit someone.

Krista Buccellato’s virginal Mabel has a sweet silvery coloratura soprano and the face of an angel in dark curls.

Clay Cartland inserts his patented comic bits into the impossible moral Frederic – including incredulous side glances and vaudevillian line readings. Plus, as we all know by now, he has a fine tenor that can wring the humor out of a lyrical line.

But the supporting cast is just as good: Patti Gardner as Ruth, Tommy Paduano as the pirate second in command, Michael Scott Ross as the sergeant of the detachment of Keystone Cops whose James Cagney-like stiff-legged moves resemble a windmill, and the gorgeous voices of Kat Gold and Renee Elizabeth Turner as Mabel’s closest sisters. 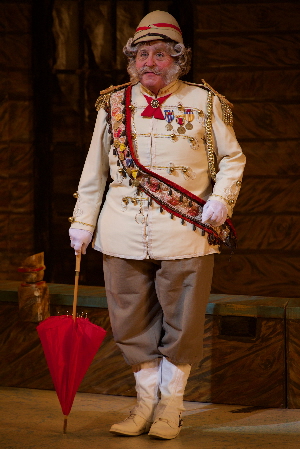 Last but not least is Michael L. Walters’ Major-General. Walters has headlined several musicals as Zaza, Tevye and Max Bialystock, although he may be best known for his travelling impersonation of Dame Edna. But his puffed up fat-head is a career highlight. Bedecked with exploding muttonchops and a monocle, Walters disappears inside this portrayal. Of course, none of that matters if he can’t master that 19th Century rap genre, the tongue-twisting patter song, which he handles in show-stopping style in the classic “I Am The Very Model of a Modern Major-General.”

Two of the Wick’s hallmarks are evident: Its access to a stunning array of costumes and the willingness to hire a large ensemble in addition to choosing works requiring more principal players than usual.

The costumes – gauzy pastel gowns, straw bonnets, male décolletage outlined with ruffled collars plunging to the waist, flowing sleeves, thigh-high leather boots — are a product of treasures assembled from the Wick vaults plus several pieces created just for this production by Jim Buff.

Nothing will ever replace live music as heard in MNM Productions’ recent My Way or Actors’ Playhouse’s current Havana Music Hall. But credit where credit is due, if you have to use digitized tracks, the full lush cyber-impersonations from The MT Pit are gaining a local reputation for the next best thing, especially when the auditorium has been aurally retrofitted like the Wick.

Anyone with an affection for Gilbert & Sullivan’s special brand of zaniness melded with glorious music will be fully satisfied. 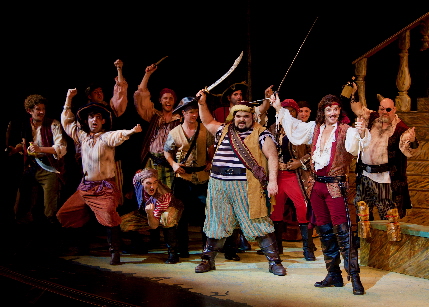 Do not miss this spectacular and hilarious hit only at the Wick. For tickets go to www.theWick.org

Posted by The Wick Theatre & Costume Museum on Tuesday, October 23, 2018