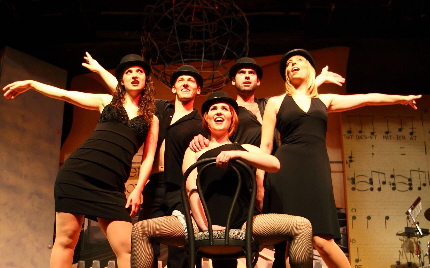 The cast of The World Goes ‘Round at Broward Stage Door

A tribute show of sorts to two of Broadway’s most prolific composers, John Kander and Fred Ebb, is the foundation for The World Goes ‘Round. At its core, the musical theater revue is really about the spirit of collaboration — Kander and Ebb’s 50-year partnership has yielded some of Broadway’s most memorable music, Cabaret, Chicago, All That Jazz, Kiss of the Spiderwoman, The Rink and Woman of the Year, and that’s just a small sampling.

Liza Minnelli helped to make much of their music familiar to the masses, and, she too, became part of the collaboration, with many of the duo’s songs written with Minnelli in mind. In fact, the singer’s first Broadway debut was in a Kander and Ebb show, Flora, the Red Menace in 1965.

The World Goes ‘Round was a collaboration, too, of the Broadway trio of Scott Ellis, Susan Stroman and David Thompson, who, in 1991, conceived a collage of Kander and Ebb tunes with the idea that the revue-style show would string together mini-vignettes complete with  choreography and costumes.

A five-member cast has their work cut out for them as they are charged with performing 32 numbers (31 if you’re splitting hairs since The World Goes ‘Round opens and closes the show) in the span of two hours.

Broward Stage Door Theatre’s production features Jerome Doerger, Liz Fallon, Laura LaCara, Matthew Montana and Erin Pittleman. And collaboration ends up being the key here, too, as this particular group of performers fare better as an ensemble, or in a duet or trio, than they do as soloists.

LaCara in a bright red dress kicks off the show in the title song as a spotlight follows her down the aisle (startling a few in the audience who didn’t expect her to appear mid-house). This was one of the songs Kander and Ebb wrote for Minnelli and it takes that brassy kind of voice to give it the powerhouse oomph it needs.

LaCara’s swagger carries her through, but when the big finish requires bravado, her voice isn’t up to the task. She’s more at home showing off her comic timing in two duets with Pittleman in Class (from Chicago), where two beer drinking buddies lament bad manners, and The Grass is Always Greener (from Woman of the Year), where LaCara’s housewife compares lifestyle notes with her celebrity best friend.

Pittleman channels a young Barbra Streisand for three numbers, My Coloring Book, which Streisand named her second album after in 1962), How Lucky Can You Get (from Funny Lady although it’s misidentified in Stage Door’s program as being from The Rink) and Isn’t This Better (also from Funny Lady). She is one of the more successful soloists, handily nuancing her performances with drama or comedy when called for, but she struggles vocally when the score calls for a range of higher notes.

Fallon, the third female in the group, is given some of the more difficult numbers that require a strong dancer as well as a singer: Arthur in the Afternoon (from The Act, another Minnelli star vehicle), All That Jazz (from Chicago) and A Quiet Thing (from Flora, the Red Menace), which segues into a pas de deux with Montana. Fallon appears less than confident in the dominant dance numbers, and the choreography is made to look more difficult and cumbersome than director/choreographer Dave Campbell surely intended. The ensemble dance numbers are, by far, less labored.

Doerger does some fancy pushups in Arthur in the Afternoon (from The Act) and plays a divaesque choreographer browbeating his charges in Pain, but his big showcase number, Kiss of the Spiderwoman in Act II, which should leave the audience breathless, never quite hits its stride. Doerger is, however, wonderfully harmonious when I Don’t Remember You (from The Happy Time) weaves into a duo with Montana’s Sometimes A Day Goes By (from Woman of the Year) as both men remember two lost loves, and again, in the same interlacing of We Can Make It (from The Rink) as it evolves into a trio with LaCara’s Maybe This Time (from Cabaret) and Pittleman’s Isn’t This Better (from Funny Lady).

The stand out is Montana who outshines at every turn, particularly in the specialty song Sara Lee, a cute ditty about a man’s obsession with packaged baked goods, and as sad sack Mr. Cellophane (from Chicago). He can sing, dance and act, and does all with a smooth finesse.

The showstoppers, though, are the ensemble numbers. Here, the individual talents come together as a company, and where their weaknesses show as soloists, the group numbers bring their strengths to the fore. Coffee in a Cardboard Cup (from 70 Girls 70) in Act 1, a whirlwind tuner that boils down modern society’s “rush it through, don’t be slow” way of living has crafty choreography and handiwork with paper cups, while its bookend in Act II, Money, Money (from Cabaret: The Movie) is perfectly exaggerated. That the cast works together as a finely tuned unit on the company numbers results in a less than cohesive production since more than a few of the solo numbers aren’t on equal par.

The accompanying three-piece band, playfully dubbed two Kanders and an Ebb, keeps everything moving at a brisk, but never hurried pace, and features musical director David Nagy on keyboards, Rupert Ziawinski playing stand up bass, and Roy Fantel on drums. The score requires Fantel to manage more percussion instruments at one time than should be humanly possible, but he never misses a beat.

Tim Webb’s set design is ingeniously fun.  A large panel at the rear of center stage has a painted flat of a piano keyboard made to look like a typewriter, while another large panel at stage right with scribbled notes of Goes Round lyrics opens up to reveal various settings including a diner and coffee hut, and other small nooks for the players to perform in.

Stage Door Theatre has a knack for knowing what makes the world go ’round for its dedicated audience base — recognizable musical numbers that will leave them humming a familiar tune or two on the way out of the theater. The World Goes ‘Round offers more than a generous dose.

This entry was posted in Performances, Reviews and tagged Broward Stage Door Theatre, The World Goes Round. Bookmark the permalink.