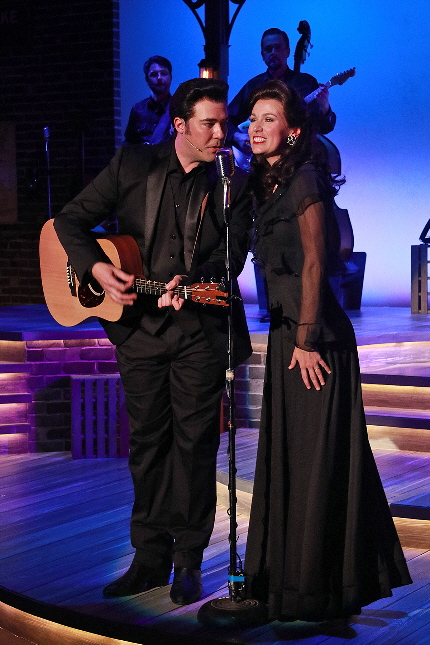 Remember the traditional triple threats of musical theater? An actor who could sing and dance. Now there’s a new triple threat – the actor who can sing, dance, and play an instrument, or two, or three. The phenomenon may have started in earnest when English director John Doyle had ten actors playing all the roles and the instruments in Stephen Sondheim’s Sweeney Todd in his 2004 production, and then followed up with the cast of Sondheim’s Company taking on the same function. Where the technique really proved its muster was in 2012’s Once, which fully integrated the actor as musician that matched the storyline of a guy and girl whose relationship blossoms over their musicianship.

Ring of Fire: The Music of Johnny Cash finds its entertainment in the same way; it’s not only integral to the storytelling of the Man in Black, but there’s an inventiveness to it, where actors play multiple instruments, playing bass on one song, then banjo on the other, and surprise: Mama plays the drums.

Following the popularity Actors’ Playhouse discovered when Miami audiences couldn’t get enough of its Million Dollar Quartet (it became one of its longest running shows in the company’s history,) Ring of Fire is similar in its structure. Like Quartet, it doesn’t follow the formulaic jukebox musical route. While biography sometimes does segue into a song, it isn’t the driving force. Fire is a play within a concert, or a concert within a play, depending on how you want to view it. No matter. Sit back and enjoy the show as you’re transported to the concert hall of the Grand Ole Opry. There’s Minnie Pearl telling her old fashioned one liners as she ushers Cash and June Carter onto the Opry stage to sing their smoky rendition of the folk song “If I Were a Carpenter.”

There are 28 musical numbers culled from Cash’s career, which director Ben Hope states in the director’s notes: “spanned five decades and 96 albums.” Speaking of Hope, he’s played Cash in Ring of Fire opposite wife, Katie Barton as June Carter Cash, in multi-city productions. Hope sits out the starring role, instead squarely paying attention to his duties in the director’s chair for this incarnation. Ring of Fire made its way to Actors’ Playhouse via Hope who starred in the March 2018 production of Once at the Miracle Theatre and brought it to the attention of artistic director David Arisco. It has a cozy cabaret feel in the intimate Balcony Theatre space of the playhouse.

Scott Moreau steps into Cash’s boots for this one and they are the perfect fit. No stranger to the stylings or the swagger or the distinctive bass baritone, Moreau was in the first national Broadway tour of Million Dollar Quartet as Cash, and his resumé states he’s performed the role of Cash 900 times, including touring in a tribute show, Walkin’ the Line, which he introduced in 2012. The actor-musician also released a tribute album of Cash songs. All of this has obviously led him to discover a way to evoke the essence of the American icon without performing an all-out impersonation. He nails the dual personality described in the script: “Johnny was nice, Cash was the bad one.”

Barton and Moreau certainly create sparks and chemistry, making it entirely believable that Cash’s most lasting success was his marriage of 35 years to Carter. Not to mention that as a songwriter, she gave him one of his biggest hits, the iconic “Ring of Fire.” Barton is radiant conveying June Carter’s strength along with her naivety and nifty as she nimbly plays stand-up bass in the opening scene and other instruments throughout.

Marcy McGuigan is a jack of all trades, playing multiple characters, including Cash’s mother, then gets comfortable sitting behind a drum kit and not missing a beat. In fact, at one point, she’s ditched the drumsticks and is keeping time on the kit’s snare drum using her hands to produce an almost bongo drum sound.

She’s paired with Eric Scott Anthony, another musical wunderkind in the show, as they sing the comedic hit “While I’ve Got It on My Mind,” that doesn’t need to feature the star of the show to bring down the house. There are other comic ditties “Dirty Old Egg Sucking Dog,” which is a novelty song that’s just plain silly. But another novelty, “Delia’s Gone,” rings a bit awkward in today’s climate of sensitive gun issues. Things were different in 1962 when Cash sang about tying his wife, Delia, to a chair, “shooting her in the side,’ and when that didn’t kill her, “with the second shot she died.” Yes, times have changed.

Rounding out the cast is multi-talented Spiff Wiegand whose playbill bio says he was born with two thumbs on his right hand and plays over 20 instruments. When was the last time you saw someone play accordion? Get ready because Wiegand does that, too. As performers trade off instruments – for one, you’ll see someone playing banjo and on the next tuner they are behind the drum set – it’s like watching choreography instead of stage blocking as they shift and move and get into place.

The production values are high, too. Jodi Dellaventura takes the train theme so prevalent in Cash’s story to heart with her re-creation of a station as a backdrop. Guitars are hung on the walls and serve as a decorative element, but also have practical use — the musicians will grab a guitar from the wall, replacing it with another, making use of the handy utility. Sometimes a suitcase, which is stacked in a pile on stage right, is used as seating. Another interesting way of keeping the atmosphere intact.

Hope is co-scenic designer, while Dellaventura designed the properties and set dressing. Eric Nelson’s lighting design casts a cool glow, while Katie Barton and Debbie Barton’s creative costumes range from farmhand coveralls to Carter Cash’s black, flowing concert gown, not to mention Cash’s signature black clothes. He wears black for a statement, “for the poor and the beaten down, livin’ in the hopeless, hungry side of town. I wear it for the prisoner who has long paid for his crime but is there because he’s a victim of the times.”

Listen for Shaun Mitchell’s knack with the sound design. During “live” numbers, the quality changes to concert hall audio to re-create the authentic sound of the Grand Ole Opry.

For those that are hoping for a deep dive into Cash’s life story, Ring of Fire puts the emphasis on the songs instead of the story. You will learn about Cash’s life, but you’ll leave appreciating his music.

This entry was posted in Performances, Reviews and tagged Actors Playhouse, Ben Hope, Ring of Fire": The Music of Johnny Cash. Bookmark the permalink.