Thinking Cap’s Emperor of the Moon Is Delightful Lune-acy 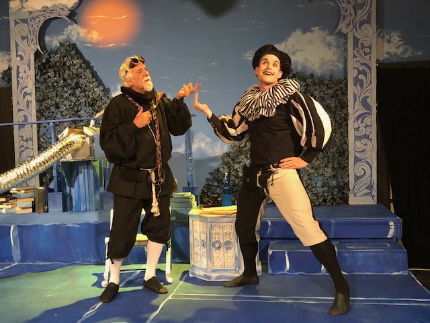 Back in world lit class, the somnambulant text grazed briefly over something called commedia dell’arte accompanied by an ancient drawing of a couple of people vogueing in the kind of weird black and white costumes you saw in photos of society masked balls.

In a rare case, you might have been trapped in an audience during an over-respectful highly stylized somewhat constipated performance of what was claimed to be an authentic re-creation of the 16th to 18th century genre.

But local theater impresario and lit scholar Nicole Stodard knows better. Back in the day, commedia dell’arte was the theatrical subset of pop culture for the masses – raucous, irreverent, satirical, uproarious and as broad as the use of an actual slapstick. Sort of a meld of The Marx Brothers, The Three Stooges and Saturday Night Live told in Restoration Era language.

With a cast of unfettered and inspired clowns, her Thinking Cap Theatre has produced a hilarious edition of, believe it or not, a 1687 comedy by Aphra Benn, The Emperor of the Moon. They smoothly navigate the unimpeded avalanche of Behn’s dense verbiage although the set-up of the plot can be hard to follow until deep into the play.

But it doesn’t matter because Stodard and her inventive company have lathered almost every second with a humor encyclopedia’s worth of sight gags, comic timing, verbal delivery, bathroom humor and endless physical schtick — all delivered at a lickety-split pace by a comically nimble troupe.

Behn, one of the first successful female playwrights in England, is a favorite topic for Stodard who produced her The Rover a few seasons back. Behn employed some characters from the art form, notably the low clowns Scaramouch and Harlequin. Then she populated the rest with well-recognized stock characters such as a pompous wealthy self-important scientist who believes there is a civilization on the moon that he wants to connect with, and his lovely daughter and niece who are blocked from marrying two swains.

The narrative really is just an excuse for this collection of human foibles to scheme, manipulate, deceive and the like in delightfully twisting threads of a tapestry of fools as people don thin disguises and hide in closets. And it is an excuse for this company to parade in Stodard’s hilarious but stunning creations of overwrought period finery and commedia dell’arte motley, all the while making wisecracks in asides to the audience that puncture any pretensions of the characters.

If a great deal of the humor comes from Stodard’s bottomless store of tricks (two rivals for one woman choose a winner through a game of musical chairs), equally clear is the contributions of this uninhibited totally committed cast. Every last one is a gem. But the most notable are Clay Cartland as the scientist’s servant Scaramouch and Timothy Mark Davis as Harlequin, his rival for a maid’s affection. Their endless verbal and physical byplay cannot be adequately described other than sort of a 17th Century vaudeville duo. Davis is fearless in his willingness to do anything physically for a laugh and Cartland has a versatile imagination akin to a Robin Williams with artistic discipline.

Leah Sessa and Jeanine Gangloff Levy are the lovelies being pursued by Stephen Hedger and Carlos Alayeto while the maid Casey Dressler flutters and twitters.   Michael Gioia perfectly inhabits that classic foolish old man with wealth and power that seems to pop up in so many Restoration works.

Doubtless, the original productions were shot through with contemporary references and jokes, so Stodard keeps that element by allowing characters to do the same here with 21st Century riffs such as Scaramouch exiting by executing Michael Jackson’s moonwalk. Scene changes are accompanied by moon-themed top 40 hits ranging from “Bad Moon Rising” to “Moondance,” but performed by the ensemble in 17th Century-sounding arrangements.

Stodard has put on display exactly what she wanted, honestly and accurately recreating the artistic era. That said, once again, her productions would benefit, I’d humbly suggest, from the input of a disinterested outside observer. For instance, it feels like a longer play than it is since the verbal humor often flies by too quickly to sustain the audience. While she gamely cut down Behn’s opus (potentially four hours long, now 2 hours 45 minutes), a friendly eye could have suggested cutting a couple of scenes with no narrative worth, only one more opportunity for tomfoolery. On the other hand, no one would dare cut Macbeth and the Gatekeeper, or Hamlet’s banter with the Gravedigger. So who knows.

Whatever else you think of any of Thinking Cap’s unique productions, it always delivers a vibrant visual experience such as Stodard’s costuming. In this case, set designer Alyiece Moretto-Watkins and lighting designer Joel De Sousa have conjured a wry imagining resembling a sky blue fairyland, an elegant period drawing room and the scientist’s book-strewn study complete with a telescope made out of a huge lens attached to an unwinding silver tube of air-conditioning duct.

In short, this Emperor of the Moon is delightful sheer lune-acy.

The Emperor of the Moon runs through June 3 from Thinking Cap Theatre. Performance 8 p.m. Friday-Saturday, 3 p.m. Saturday, 5 p.m. Sunday. Running time 2 hours 45 minutes including one intermission. Performed at The Vanguard, 1501 S. Andrews Avenue, Ft. Lauderdale, www.vanguardarts.org. Tickets, $40.  For tickets: www.brownpapertickets.com/event/2922381 or thinkingcaptheatre.com or (954) 610-7263. Note: There are only 40 seats, so make reservations early. 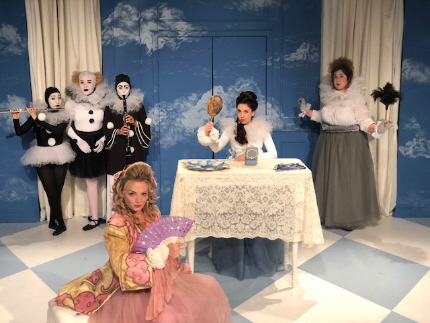