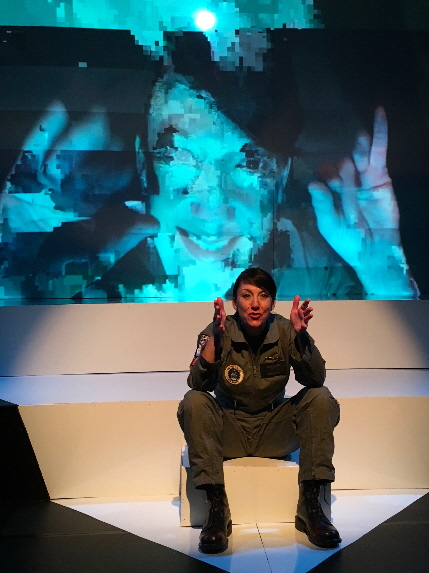 In George Brant’s play, Grounded, now at Thinking Cap Theatre, there is much to take in. The story of a U.S. Air Force F16 pilot is a soul-baring exercise about a woman in love with her job. She’s head over heels for the uniform she wears, the plane she flies, which she has given the name Tiger, the blue of the sky, the thrill she feels when “Boom goes Saddam’s dipshit army” as she rains the missiles from Tiger’s belly.

When we first meet the pilot, who Brant has kept anonymous (there’s a purposeful irony to this as she reveals so much else about herself through the course of her play), she’s on leave, hanging with the boys, drinking beers in a bar that’s playing John Mellencamp, “R-O-C-K In the U.S.A.” and how fitting. She’s waiting for her next assignment.

She meets a one-night stand, a guy named Eric. Men are usually afraid to approach her, she says, but not Eric, because she’s a rock star, and he knows that he likes a rock star. The pilot and Eric spend three days holed up together. Boom. She gets pregnant. Then, that’s it, no more fighter pilot in the sky. She’s grounded.

Actress Niki Fridh plays the lone pilot, the only person on stage for 75 minutes, but the other characters come to life in Brant’s description and in the way Fridh materializes them for the audience.

There are demands aplenty in Brant’s script – the character has to go from 0 to 60 in more than a few instances. Also, the script, not that you’d know this from the delivery, is written as a poetic monologue – there’s limited punctuation, which leaves the actor and its director open for interpretation – where to take breaths, where to pause for a beat  – and, most importantly, preserving its poetic rhythm, which is done so subtly, but so effectively.

Credit this loving attention to the words to director Nicole Stodard, who views scripts as sancrosanct. In this instance, it’s beyond important. This is where Thinking Cap soars (excuse the pun) in a play like Grounded, because this is where the company shines – knowing how to create the character through the words.
Fridh is the fighter pilot, and gives her just the right amount of swagger to have the energy comes off as perfectly inherent. Not put on, but real. When she begins a monotonously grounded life, and is sent to Las Vegas to work in a desert trailer piloting a drone – she’s in the Chair Force, she says sarcastically — you share her emotions.

Was she punished for being a woman and having a baby and having to take time off from the military? You feel her emotions. You’d ask the same questions.
When she sits in the dark dungeon of a trailer piloting an $11 million machine from 8,000 miles away, you wonder how the hell she’ll get through it, then go home to her family every night. She kisses her family goodbye and goes off to war every day. Could you?

A one-woman play about a fighter pilot assigned to drone duty seems so off the grid. Brant, a playwright from Cleveland, whose pilot monologue is a tour de force role, when done right. It starred actress Anne Hathaway in the off-Broadway production (she read the script and reached out to play the role, and announced in a press releases last year that she’ll be producing and starring in movie version with Brant writing the screen adaptation). Brant got the inspiration when reading an article in 2011 about how much the U.S. government was spending on drones. He interviewed a male Air Force lieutenant, but felt there was more to be explored if he switched the idea to having a female pilot.

There is much to relish in this production – Brant’s script, Fridh’s acting, and Stodard’s attention to the words on the page. The images by projection designer Cat del Buono add the other character elements – the grainy video of the sand below that the pilot stares at for 12 hours through her drone camera, her point of view from the car dashboard as she travels through the Vegas desert to and from work, and the images of rumpled sheets when she goes home to her bed and Eric. Dramatic lighting design by Eric Nelson and a simple platform for a set by Alyiece Moretto, with Stodard as sound designer adding the soundtrack, round out a fully imagined production.

Brant said he chose to tell a woman’s story of war because a man’s point of view had been done so many times before. “Grounded,” too, has been done before, but Thinking Cap Theatre approaches it their way.

Sparse, but so full of life.