Get Ready For Brain-Stretching Ride In Dramaworks’ Arcadia 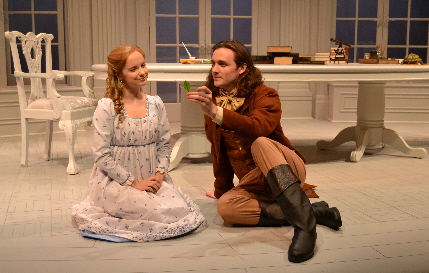 When idea-hungry audiences at Palm Beach Dramaworks who have cheered Ionesco and Albee are faced with something less challenging, some complain to Producing Artistic Director William Hayes that they can see that fare elsewhere.

They will get their wish in extremis this month. Tom Stoppard’s Arcadia is a 1993 drama suffused with comedy and populated by charismatic intellectuals theorizing about art, physics, romance, higher mathematics, architecture, sex, philosophy and a dozen other concepts with a density and speed that will dizzy almost anyone.

Stoppard — best known for The Real Thing, Rosencrantz and Guildenstern Are Dead and Shakespeare In Love — is famous for mixing human emotions into some of the most Byzantine thematic explorations in 20th Century theater.

In his hands, while themes of chaos versus order, certainty versus uncertainty and many others underlie the action, you don’t have to be a wonk in any field. You can simply watch the witty characters whirling in recognizable patterns of relationships, or appreciate the overarching beauty of human beings setting their minds to intellectual sparring.

Stoppard’s verbiage is like music, Lewis said. “Instead of trying to discern every note at any given time, we have to let the collective sound wash over you.”

In fact, the play is suffused with a human element, said Vanessa Morosco (recently in the Maltz Jupiter Theatre’s Disgraced) who plays the 20th Century literature scholar Hannah Jarvis.

“The themes in the plays are incredibly universal and they are often explored through these very intelligent accomplished academics. As audience members you don’t have to know what they are talking about; you just have to see how they affect each other on stage,” she said.

Watching Hannah and a rival researcher argue about hermits and Romanticism of the 19th century “is like watching two eccentrics arguing at your dinner party. That’s the delight: You get to see the fireworks they have.” (It doesn’t hurt that the rival researcher is played by her real-life husband, Peter Simon Hilton.

Set in the same English country house, a set of academic researchers in 1993 are hilariously misinterpreting clues to the actual events that we alternately see occurring to the home’s original occupants in 1809 to 1812. The play mashes time and space. On a table common to both eras, quill pens reside alongside laptops computers. Underneath is an ancient turtle seemingly spanning both eras. It simply has to be seen to be fully appreciated.

The script is daunting to put it mildly. Ryan Zachary Ward, who plays Septimus Hodge, the sexy 1809 tutor to the lord of the manor’s preternaturally brilliant daughter, said, “The hardest thing is that the intelligence of the character so far exceeds my own.”

“This play is really made of discoveries. I feel like one of the pillars of drama is the nature of discovery. Sometimes it’s hard to tell the discovery that belongs to the actors and discoveries that belong to the character. It’s a constant learning curve.”

Stoppard does try to help the audience by having the experts in the play try to explain some of the concepts to the other less esoteric-minded characters in each era.

Still, Arcadia demands an audience invest an effort; this isn’t a passive experience like watching television in your living room. Ward advised, “I think people should know that they are going to use their ears in a different way than they do in most plays. I think generally the laser focus you use with your eyes with most shows, you need to invest that intensity with your ears.”

Still, Lewis has been delving into the endless intricacies since Dramaworks decided on the title a year ago.

“From the very first day that we decided we were going to do it, you (investigate the issues) not just contextually, but how to show them visually. Stoppard is one of these great intellectual challenges and it really puts me to the test,” he said, noting that the process of analyzing every beat of the script requires wide-ranging research. “You begin to let it percolate, and then let it germinate, then think about it and read about it, and then you put it aside, then talk about it with other colleagues.” The meanings and the intentions of each characters in each moment of the play “reveal itself slowly and over a period of time you try to find the core and the heart.”

The pre-rehearsal work sometimes succeeds, sometimes fails. Sometimes Lewis and the cast discover in rehearsal a completely differently meaning than they thought was there going in,

At a minimum, Lewis’ detailed work with his cast results in performances that assure the audience that they can relax about the veracity of what they are hearing even if they don’t follow it because at least the actors make you think they do understand it.

In the end, for all the intricate talk about entropy, elaborate gardening and Lord Byron, Lewis says Arcadia “is about relationships being more important than the details” of thermodynamics. “There’s no way unless you’re a brilliant scientist, there’s no way to bring clarity to these issues. But we can (understand) the personal relationship.”

Even more so, “I think Stoppard is very much about curiosity and when we lose our curiosity, we lose the sense of moment about the world. The formulas are there, but what’s the why behind why are we dealing with this world.”