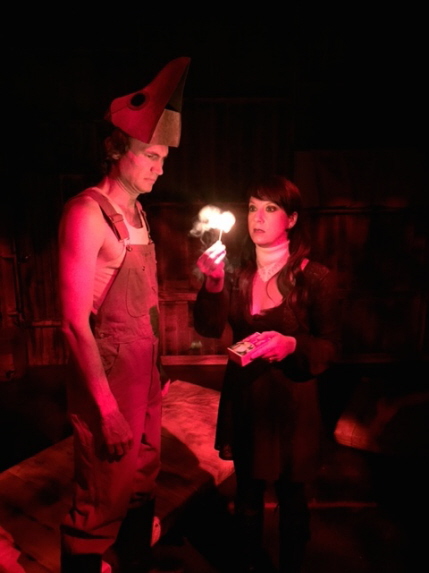 A New York theater critic reviewed the American premiere of Waiting For Godot at the Coconut Grove Playhouse in 1956. Legend has it that his review started with something like, “I have no idea what I just saw, but it has worth.”

While playwright Erin Courtney is no Beckett, a similar vibe surrounds Thinking Cap Theatre’s stimulating production of her 2012 Obie-winning A Map of Virtue. I know it has something to do with chance, guilt, morality and the ineffectiveness of language; I know this because I looked it up on the Internet and, in retrospect, I can see how what I saw bears that out.

Suffice it to say that if you like your theater schematic, clear-cut and requiring little cogitation after the curtain falls, you will absolutely hate A Map of Virtue. But if you don’t mind being a bit at sea during and after a play, if you like wrestling with a production while it’s underway, if you enjoy trying to dope out what it meant on the ride home, if you like, well, thought-provoking theater, then Thinking Cap’s production may well intrigue you. You may not ever be able to get your brain completely around it, but Thinking Cap’s laudably ambitious effort has the power to perplex and unsettle you if you let it.

What you cannot fault is how director Nicole Stodard and her cast invest themselves 100 percent in what starts out with quiet naturalistic interviews of everyday people, evolves into metaphysical metaphors including a bird statue come to life, slides into a nightmarish central section worthy of a slasher film and then reverses the process until we are back to a group of seemingly normal folks whose lives, though, have been cauterized by the experience. It is a modern day fall down a supernatural rabbit hole and then back out again.

Especially impressive is that Stodard, her creative team and the cast somehow make a cohesive whole out of these markedly disparate tones.

The episodic plot begins as urbanites Mark (Tom Anello) and Sarah (Casey Dressler) are being interviewed separately for some kind of documentary. One of Stodard’s added touches is to throw live video images of the interviews on a screen behind them. The two describe  three coincidental meetings on three continents that pivot on their mutual obsession with birds. Sarah has birds tattooed on her chest and Mark has carried a tiny bird statue since filching it from sexually abusive headmaster. Initially, it sounds as if they are describing the stirrings of a romantic relationship. Slowly, the recollections ooze out a sense of apprehension reflecting where the tale is really going,

Interspersed between some of the interviews are monologues and poetic songs called terzanelles (25 points for any non-English Lit major who has heard of it) performed by an anthropomorphic representation of that bird statue (played by Jovon Jacobs). We also meet over time Tom’s boyfriend Victor (Alex Alvarez) and Sarah’s husband Nate (Scott Douglas Wilson). So much for the romance.

At a party, the wasted trio of Sarah, Mark and Nate accept the invitation of a mysterious woman June (Niki Fridh) who offers to take them to another party. Instead, she drives the sleeping group to her isolated farm in the woodsy Catskill Mountains.

They awake in a locked barn and realize they have been kidnapped by the crazy woman and her boyfriend, the half-witted Ray (Noah Levine) who wears a frightening bird mask and plays the ukulele while singing badly about head lice. It’s a kind of cross of The Last House On The Left, The Wicker Man and The Blair Witch Project.

In the central section, June and Ray force Mark at gunpoint to try to memorize nonsense syllables and teach their impossibly unintelligible meaning to his friends. Then they carry him off for who knows what fate. When he returns to his companions, he is too overcome to describe what has happened to him.

This all sounds ludicrous on paper, but the company and Stodard succeed in creating a creepy nightmarish aura as the three victims become increasingly terrified at the possibility that June and Ray are burning children alive in a nearby bonfire.

The three are rescued by Victor and the play intentionally winds back down to a seeming normalcy as the quartet quietly muse how the ordeal has affected them.

You might well ask what single vision, aesthetic or theme unifies all the aforementioned list of topics (and there are others). We can’t answer that; it completely eluded us. But the journey certainly was unlike much of anything you’ve seen on stage before.

The play’s title, according to the Internet, refers to the first seven sections of the play leading to the nightmare and then the seven section coming out. Each of the mirrored sections are named for a major virtue such as curiosity, loyalty, empathy, honesty, integrity, love and intuition, although what that has to do with anything is opaque here.

Again, interviews with Courtney found online indicate that the language the victims use in the early interviews contrasts with the verbiage they use in the later interviews. Perhaps, but that did not come across.

That said, if an audience is willing to stay open to the experience, something almost indefinable does shine through and makes the evening worthwhile to an intellectually adventurous audience.

This would fall smack on its face as pretentious if not for the actors’ commitment and the physical production.

Anello and Dressler are especially effective in creating everyday people you might work with in an office or meet at a party. Fridh is credible as the unhinged “headmistress” and Levine is just plain unhinged.

The enveloping sense of place is amped up by a dense eerie soundscape of cricket chirps, creaking floorboards and other aural cues by David Hart and Stodard. Even more effective in creating a sense of justifiable dread is the ominously atmospheric lighting by Eric Nelson worthy of the most unnerving haunted house.

Perhaps it’s the very uncertainty of Virtue’s upended world that makes this play scary enough to put an early Halloween chill in an audience.

Since 2010, Thinking Cap has always embraced an ecletic array of styles. Since the troupe moved into its new digs at the chameleonic Vanguard Sanctuary for the Arts, it has produced the mainstream crowd-pleaser Always…Patsy Cline, the erudite epistolary play Vita and Virginia, the existential vaudeville Waiting For Waiting For Godot and the wildly satirical farce The Book of Liz, each thoroughly satisfying evenings of theater and each totally alien to the others except for their appeal to the little gray cells. Next up is Oscar Wilde’s The Importance of Being Earnest set in the disco 1970s with characters cast cross-gender.

A Map of Virtue runs through Oct. 18 from Thinking Cap Theatre performing at The Vanguard Sanctuary for the Arts, 1501 S. Andrews Ave., Fort Lauderdale, on the west side of the street across from Broward Health Center. Performances 8 p.m. Thursday-Saturday, 5 p.m. Sunday. Runs about 1 hour 20 minutes with no intermission. Tickets $35. Visit www.vanguardarts.org, thinkingcaptheatre.com or by phone at (813) 220-1546.