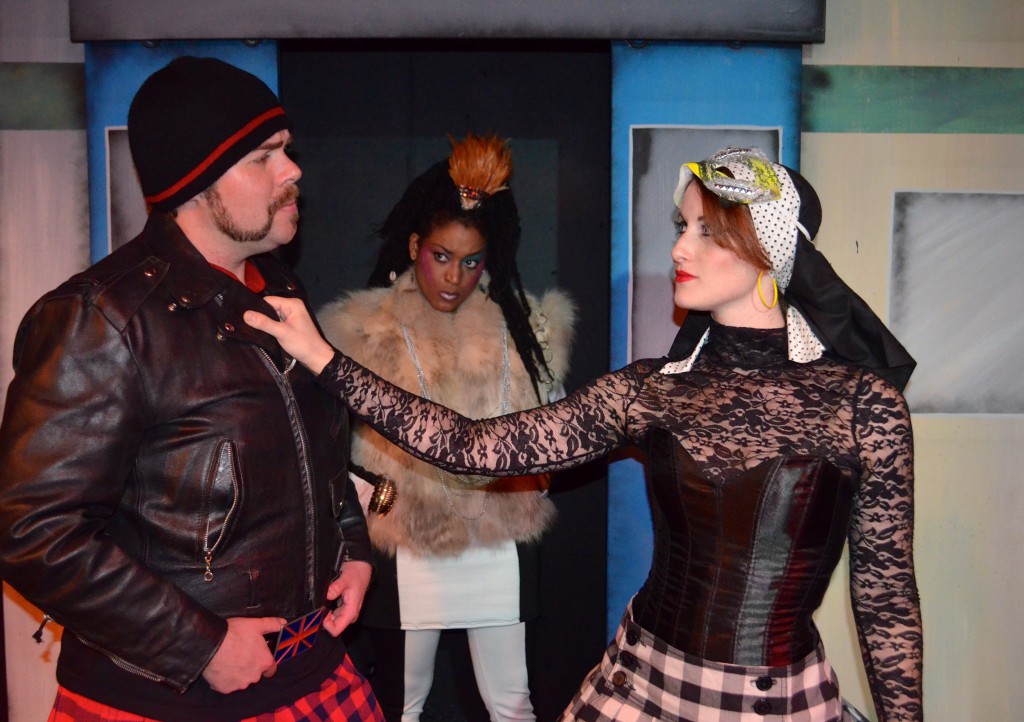 There’s more to Thinking Cap Theatre’s inventive The Rover than staging a 300-year-old play with oomph enough to keep a 21st century audience interested. What director Nicole Stodard (who is also the artistic director of Thinking Cap Theatre) has done is to craft an inventive, ambitious and quite delicious offering of England’s first professional female playwright’s navel gazing study of the dating games people play. And watching Stodard’s adaptation of Aphra Behn’s The Rover proves that the battle of the sexes hasn’t changed much since 1677.

Stodard has kept the Restoration period language intact. At first blush, this might seem a challenge for the actors and the audience, but the play is so thoroughly understood in its direction and by its players and their willingness to wrap themselves around the classic language that, an hour into the play, the ’twas’s, thou arts and thines, blend into the overall contemporary ambiance.

A feminist long before the word was fashionable, Behn’s female characters give a group of English cads a run for their money (In fact, in one of the play’s scenarios involving a prostitute, this happens literally!).

The play takes place in Naples, Italy, at the time of Carnival. Hellena (Nori Tecosky) has set off to enjoy one last night before she’s committed to the nunnery. Her brother, Don Pedro (Theo Reyna) is in charge of her affairs and those of her sister’s, Florinda (Yevgeniya Kats). Don Pedro has betrothed Florinda to the well-to-do Don Antonio (Giordan Diaz), much to her protest. Meanwhile, Florinda has her heart set on Belvile (Noah Levine).

The rover of the title is Willmore (Scott Douglas Wilson), a rogue who thinks uni-directionally and only with what’s under his kilt, and who wants to meet, charm and bed as many women as possible. It is apparent this isn’t just his order of business on Carnival night, but pretty much his profession. (A bit of trivia: Willmore is said to have been modeled after Charles II, who enjoyed the play so much that he ordered private viewings of it.)

Hellena falls for his charms as does a courtesan, Angellica Bianca (Lela Elam) who, until meeting the wooer, only cared about being paid handsomely for her services. Even her icy heart is melted by Willmore. Rounding out the multiple triangles are Blunt (Mark Duncan), an English buffoon who gets caught in the trap of a thieving prostitute, Lucetta (Desiree Mora), Callis (Carey Brianna Hart), a Blackberry toting handler assigned to watch over Florinda and Hellena, and their friend Valeria (Emilie Paap). And Frederick (Mickey Jaiven), the guy group’s watchful “bro,” whose role is to keep his buddies in check. Love triangles abound as do mistaken identities, double entendres and sexual innuendos are played to the hilt.

It is a large cast for sure, but Stodard has reconfigured the small space to a three-quarter seating arrangement, therefore leaving room to create different levels through the middle of the small house. The limited mainstage area, surprisingly, never seems crowded and she’s smartly worked out how to make use of extra playing space, including a fascinating courtesan’s chamber against the back wall that blends into audience seating.

The wardrobe, by Stodard and Chastity Collins, also becomes part of the fun with Wilson as The Rover decked out in two bawdy kilts and Elam as the Courtesan looking fierce in a tight Catwoman-esque get up. Collins also created the set design, an inventive backdrop of representations of subway cars that are handily used as entrance and exit points.

Wilson owns this play and well he should. He makes the words his own, creating subtle nuances to deliver the language in a contemporary flow, plus he’s a master at never letting a double entendre go unnoticed. His Rover is drawn almost as if it’s a cartoon character, but never caricatured — part Jack Black, part Snagglepuss (I may have even heard a “So Exit, Stage Left”). But there’s no mistaking why even a courtesan can’t resist his wild charms. Elam (the casting of an Equity actor is the first time for TCT) is the other stand out as Angellica, although amping up the jilted courtesan a notch could really create some fiery sparks near the end of the play when Angellica makes her grand exit.

Tecosky has the most chemistry with Wilson and when the two are on stage together, it’s pure delight. She’s also given one of Stodard’s most inventive sight gags. Her Hellena dresses as a pizza delivery boy with a story to tell, and Tecosky plays it with just the right edge of campiness letting the sight gag speak for itself.

Duncan as Blunt will be an audience favorite because of the built-in buffoonery, but there are times that the clownish portrayal is forced and over-bloated. The same criticism goes for Gordon Diaz, who inserts a never really explained facial tick into his character of Don Antonio, which proves more of a distraction than something that adds to the characterization.

Fight choreography by Paul Homza adds to the overall punk picture of the play, not to mention a soundtrack that features The Sex Pistols punk anthem “God Save The Queen,” among some other throwbacks.

The Rover aligns not only with Stodard’s artistic vision for her company that she founded in 2010 — its mission of devoting itself to experimental, provocative, and socially-conscious plays — but it also fits nicely into her work outside of TCT. She’s currently a candidate for a Ph.D. in English with a specialization in Drama from the University of South Florida. Not surprisingly, she’s chronicled the journey of The Rover from page to stage as part of her dissertation.

This is smart, elevated theater made palatable, but not pandering, to the masses. As Behn so succinctly said in her sequel to The Rover, “Variety is the soul of pleasure.” Thinking Cap Theatre’s production carries that torch with its era-hopping variety, classically modern soul, and as an evening of pure theatrical pleasure.

One Response to Thinking Cap’s The Rover Is Ambitious, Smart & Delightful