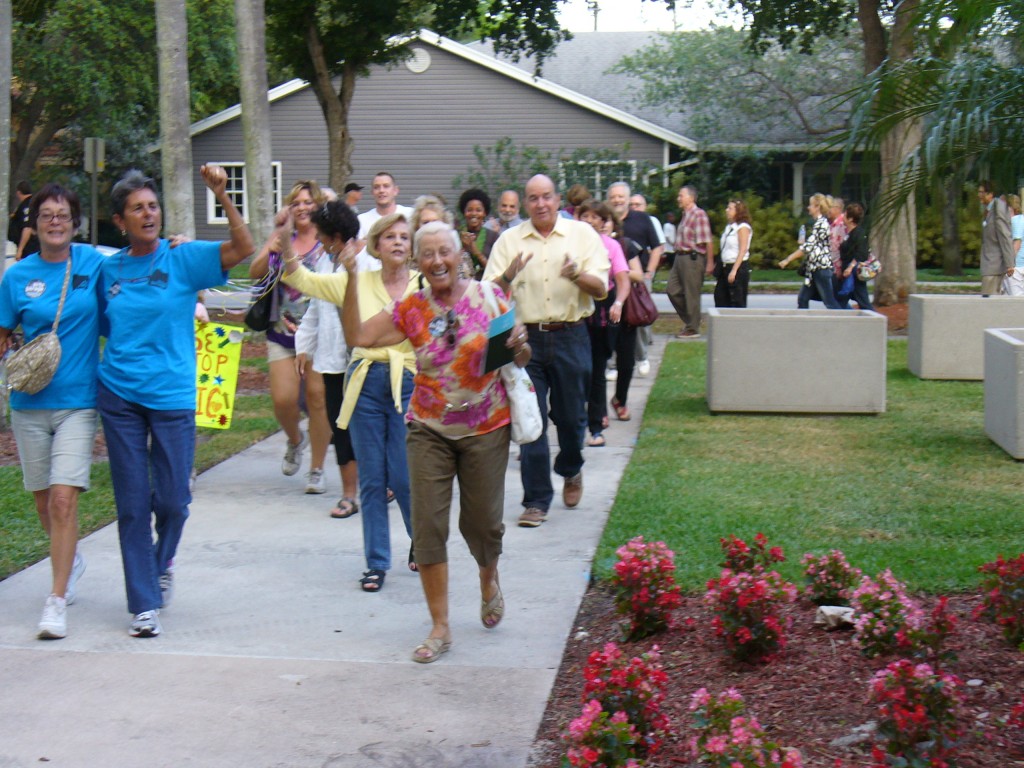 The Delray City Commission voted unanimously Tuesday to postpone selling the Arts Garage’s home base for two months, giving the venue a reprieve from relocating or even closing.

Faced with an overflow crowd of arts patrons ready to speak at a public hearing, a box with 1,800 petition signatures and a lose-lose choice, Mayor Thomas Carney proposed delaying action until April 16 – suggesting that two parties interested in buying the property are willing to explore a compromise.

Commission members were visibly relieved at Carney’s suggestion because they feared choosing between endangering the arts venue that many personally support or risk losing the national headquarters of a personal injury law firm that wants the space for expansion – with the promise of scores of new jobs.

Commissioner Al Jacquet said, “When we talk about Delray Beach being a destination, we give Arts Garage full support being in its current location. But we also don’t want the reputation of pushing away a national law firm.”

Whether the commission has sidestepped the problem for good depends on either a compromise deal or the law firm finding another space.

The 18-month-old performing arts venue – which includes Louis Tyrrell’s The Theatre At Arts Garage — currently occupies half of a 10,000-square foot space on the built-out first floor of the Old School Square Parking Garage in the Pineapple Grove Arts District.

Although the structure is owned by the city, half is leased to Arts Garage and the other half to Puppetry Arts Center of Palm Beach through the Community Redevelopment Agency, a stand-alone government body, Carney said. Both groups’ leases extend to January 2015, but each has a clause that allows the CRA to give 30 days’ notice to vacate, said Arts Garage Executive Director Alyona Ushe.

The city offered the space for sale in 2008, but it had no serious takers until last August when it received a bid of $1.7 million from the law firm of Kanner & Pintaluga, which has seven offices in Florida and Georgia. The firm wants to expand after establishing its headquarters two blocks away from Arts Garage. The rapidly growing company now has 100 employees crammed into its Delray offices. The city balked at the initial price; then the firm bid $2.5 million in December. The company also pledged to phase in 50 to 115 new jobs.

The law firm’s bid prompted a nearly identical counter-offer from Schmier and Feurring Properties, whose principal Bob Schmier is a board member of Creative City Collective, the non-profit group that operates Arts Garage.  He plans to purchase the property with his firm’s money, then lease the half the space to Arts Garage for 10 years with the arts company holding an option to buy it.

Whatever was to happen or does happen, law partner Howard Kanner renewed his pledge Tuesday not to evict Arts Garage before its lease expired in 2015.

But after that, Arts Garage would have a problem. It was given the space at a bargain basement rent of $466 a month as a pilot program to see if a multi-discipline venue would draw patrons and stimulate activity in the growing arts district.

If it succeeded, one plan called for the program to move someday to a larger space called Arts Warehouse at NE 3rd Street and NE 3rd Avenue — closer to the railroad tracks and further away from the arts district.  The Arts Warehouse also would cost $8.5 million of renovation that no one has in their pocket.  Bottom line: the Arts Garage operation would have difficulty moving into the Warehouse within the two years left on its lease. But according to Ushe and Carney, Arts Garage has been more wildly successful in a shorter period of time than anyone predicted and no one wants to alter anything including its location.

Hope for a compromise was born over the weekend when Carney realized that the law firm had another choice. He learned that the CRA had rejected multiple attempts by the law firm to bid on five acres the CRA owns on West Atlantic. Carney and Commissioner Christina Morrison urged the CRA Tuesday to expedite Kanner & Pintaluga’s pursuit of that property.

Alternatively or simultaneously, the commission hopes Kanner and the Collective  can reach a deal in which the Arts Garage stays put indefinitely and the law firm occupies the half of the building currently being used by Puppetry Arts Center as a phased solution involving other property in town. Kanner said Tuesday night he was open to considering all options.

Ushe left the meeting saying the same thing she said before it, “We will find a solution and we will make it work.”

The garage has been hosting Tyrell’s theater as well as a wide variety of concerts, especially jazz and blues performers. The theater company has presented such contemporary and thought-provoking work such as the recent Exit, Pursued By A Bear and the current world premiere of Israel Horovitz’s Gloucester Blue.  Tyrelll said Tuesday night that he was averaging about 100 people a night in the intimate space. Ushe said the venue hosts four shows a week, drawing about 600 people into the district.

It has grown a loyal audience, indicated by about 100 people who came to the public hearing Tuesday wearing Arts Garage buttons. Dozens signed up to speak, but the postponement occurred before anyone was allowed to speak.