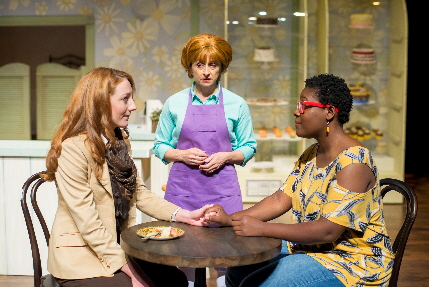 Della Brady is a small town North Carolina baker who refuses to make a cake for a lesbian couple planning to get married because it runs counter to her religious beliefs.

Worse, one of the brides is the beloved daughter of Della’s late best friend. Della just can’t bring herself to support the union with her renowned expertise because “it just doesn’t sit right.”

But the genius of Bekah Brunstetter’s The Cake and its production from City Theatre is that Della is not some hate-engorged villain. Neither is the other bride, an outspoken liberal who cruelly spares no scorn for Della’s comprehensive conservative outlook.

The Cake digs deep below stereotypes and expectations to examine the contemporary clash between sincerely held principles that threaten to cripple relationships among people who care for one another – or at least have to live in the same world.

In the hands of artistic director Margaret M. Ledford and the superb Irene Adjan as Della, The Cake lays out the issues squarely but with compassion and respect for people diametrically opposed. It is telling that while the play ends satisfyingly, neither side has retreated from their underlying convictions – only found a bridge to forge “a separate peace.”

The Cake, part of the Arsht Center’s locally-based Theater Up Close program, is another in a series of solid full-length productions in recent years from the company best known for Summer Shorts.

The script has Della describing her work in reveries as she creates culinary masterpieces and Brunstetter skillfully folds in how the process of cake-making echoes the amiable Della’s inner beliefs.

“It’s the only way you’ll get that taste,” Della says in an imagined appearance on a televised baking contest. “It’s the taste of time and obedience. All the scientists in the world could sit in a lab for eternity and never recreate it. So if you want results – if you want to make a cake that you could take a nap in, that you want to crawl inside of, that you would die for…. You must – follow – the – directions.”

It cannot be overstated how brilliant Adjan and Ledford are in investing such sentiments with a completely apolitical non-judgmental quality. It is simply a restatement of a lifetime of indoctrination questioned no more than questioning gravity.

Further, Della is a magician and justifiably proud of her hard-won skill in this one area of her world that she can control.

She is not stupid or naïve, but the life she has accepted for decades has comfortably reliable standards and structures. That allows her to be an optimist, seeing the good in people and seeing no need to get crosswise with them. She says, “I read about what’s going on with ISIS and think to myself, if cake were just free for everybody, there would really be a whole lot less problems in the world.” She knows that’s a silly thought, but she believes it.

She hits a wall when Jen (Lexi Langs) comes home from New York City after her mother’s death to fulfill a desire to be married in her home town. The two women share a deep affection: Della is virtually a stand-in for the mother.

But then Jen’s intended, the urbane magazine writer Macy (Stephon Duncan), bluntly and thoughtlessly lets fly the truth to Della, knowing the reaction to come. Indeed, when Jen asks Della to make her wedding cake, Della first stammers that she is too busy and later acknowledges that a same-sex union runs counter to what her Bible teaches.

The self-righteous Macy truly loves Jen, but is driven to make unvarnished pronouncements regardless of who it might hurt. She tells Della who is struggling, “Ambivalence is just as evil as violence.”

Della seeks advice from her plumber husband Tim (Michael Gioia) but he’s even more certain that “It’s just not natural.” But unnerved by the situation, Della retorts, “Neither is confectioner’s sugar.” Yet, when he asks her what she did about the request, she says, “I did the right thing.” Tim says, “We can’t pick and choose our bible, honey. That’s when the edges start to blur.”

The script is evenhanded. Jen tells Della about how sex with boys never felt quite right and that lovemaking with Macy was a freeing revelation. But when Jen asks Della what she conjectures her mother would think, Della is agonized but has to be honest: “I think it would break her heart.”

Della recognizes that the two women are deeply in love and compares it to the distanced feeling she and Tim have had since they discovered he could not have children. As the play progresses, Adjan charts how the dilemma forces Della to reexamine what she believes and why.

For all the drama, the script is filled with gentle humor, especially quips emanating from the uncomfortable flailings of people trying to honestly negotiate alien territory.

The Cake from City Theatre as part of the Theater Up Close series performs through Dec. 22 in the Carnival Studio Theater at the Arsht Center’s Ziff Ballet Opera House, 1300 Biscayne Boulevard, Miami. Performances are at 7:30 p.m. Wednesday-Saturday, 3 p.m. Sunday. Tickets are $45-50. Running time is about 90 minutes with no intermission. (305) 949-6722 or www.arshtcenter.org.