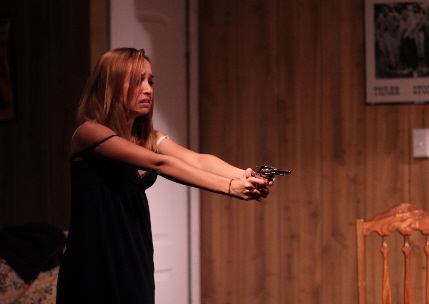 Killer Joe, playwright Tracy Letts’ 1993 debut writ large in feral violence and bottomless venality, is such a powerful brew of toxicity that the script carries along an uneven production at Andrews Living Arts.

No matter how heedlessly and blithely Letts overruns any social convention you can think of, he never fails to find another roadblock he can’t smash through in his examination of the dark depths of what passes for humanity.

While the cast is sometimes nearly adequate to the task, sometimes not, director David Wayne Scism understands Letts’ meld of inky black humor and excoriating melodrama. As a result, Andrews’ production can be quite funny at times and, in the closing scenes of both acts, achieves such a voyeuristic wallowing in tragedy that the audience stops breathing.

But while the young cast bravely invests all they have in these roles, their skill levels are not quite developed enough to nail this play. Only one cast member is fully believable and the linchpin role of the title character is fatally miscast, undercutting the entire evening.

Killer Joe is a merciless satire of Texas trailer trash, a sub-genus not simply scraping the bottom of the barrel, but breathtakingly devoid of true decency. The play is set inside a rundown raggedy mobile home in a decade in which lava lamps and Farrah Fawcett posters are standard home décor.

Scuzzy 20-something drug dealer and congenital loser Chris Smith (Christopher Millan) is dodging a murderous loan shark after losing the stash for which the kingpin fronted him $6,000.

Chris’ solution to his fiscal woes is to recruit his father in a plot to murder Ansel’s alcoholic ex-wife (and Chris’ mother), Adele, for her $50,000 life insurance policy. Chris has been told by an acquaintance that the policy is made out to Ansel’s grown but child-like daughter Dottie (Krystal Valdes) who is both mentally challenged and sharper than everyone else by the proverbial country mile.

The men have also been told of a legendarily corrupt Dallas police detective, Joe Cooper (Diego Coscia) who has an entrepreneurial sideline as a contract killer. The Smiths don’t have the upfront money to pay Cooper, but he becomes taken with virginal Dottie and gets the men’s promise that he can have her as a retainer. Needless to say, nothing goes remotely right or as the participants expect. There will be blood, plenty of it.

The play is awash in foul language, domestic violence, gun shots and such scenes of interpersonal amity as Sharla being forced to suck on a chicken leg held at Joe’s crotch in an imitation of oral sex as Ansel watches impotently. Be warned or encouraged: Everyone in the cast ends up naked, half-naked or in their underwear at some point.

What makes much of the play bearable is the nervous humor that derives from watching these dimwits expose how they mindlessly, consciencelessly sink deeper and deeper into moral turpitude with a blithe attitude and copious rationalizations.

Chris throws away the idea out loud, “Is anyone going to care if Mom’s not around anymore?” He talks about the murder of his mother with such a thoughtlessness, as if it was a natural option, that audience members will likely giggle.

Ansel suggests maybe they could murder Mom themselves. Chris fires back, “You gonna kill somebody? You can’t even tell time.”

Or when the family is expecting Joe for dinner, Dottie cleans house by gathering up a large amount of garbage from the living room floor and tosses it behind a sofa.

Their self-pitying self-centered cluelessness is beyond pervasive. Chris, who ordered his mother’s murder a few scenes earlier, bemoans to his sister, “I don’t want to hurt anybody.”

Scism gets all of this and brings much of the right tone out of his cast.

Letts is Oklahoma-born (his August: Osage County is set in northeast Oklahoma) and, I speak from experience, has an Oklahoman’s inbred disdain for the particular strain of Texans living just across the Red River.

But the fact is that other than Valdes who projects Dottie’s disconcerting mix of frightened rabbit and insightful observer, the rest of the cast are saying lines, often with animation and energy, but you always know these are actors working on their thespian skills.

The crippling problem here is Coscia’s performance as Joe. While he ratchets up his energy as the play progresses, he simply cannot radiate the required sense of innate menace and barely restrained proclivity for violence. That robs the play of its driving center and much of its tension. It doesn’t help that Coscia who born in Italy has lost very little of his thick accent, making it virtually impossible to buy his portrayal of a redneck cop from Dallas, even though someone inserted a non-Letts line that Joe Cooper moved to Texas from Bella Italia. He’s not yet in the Javier Bardem class creating mush-mouthed visitors as immoral tamped-down serial killers.

The play kicks off a new season for the tiny company based in a former auto repair shop since around 2011. The ambitious troupe is doubling the number of plays it is offering and has added concert versions of large-scale musicals on a stage half the size of your living room. Andrews’ quality often ranges all over the map, but potential patrons should be warned that some performances sell out in the 50-seat house.

Sidebar: Killer Joe had its South Florida debut in 2000 at GableStage with Pamela Roza and Ken Clement, and became a film in 2012 directed by William Friedkin and starring Matthew McConaughey.