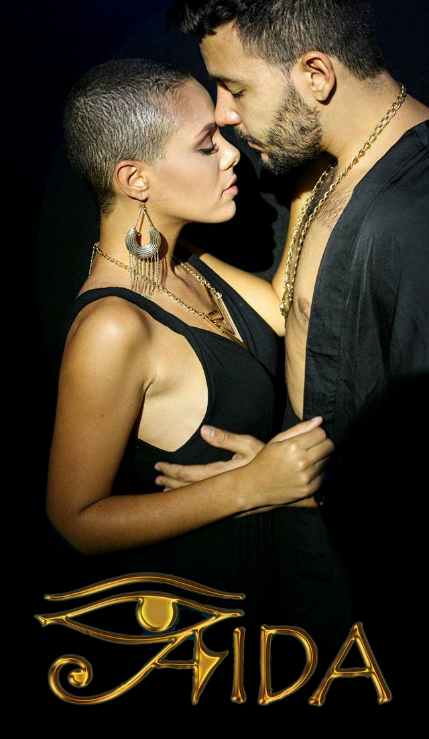 I meant to lead off this review telling you in detail what a surprisingly impressive bow the new Marquee Theater Company had this weekend in Boca Raton with its production of the Elton John-Tim Rice pop musical Aida. But that will have to wait a few moments.

Because transcending the fledgling company’s success was witnessing the supernova of an unknown college sophomore in the title role with the kind of performance that theater lovers paste in their scrapbook so they can say, “Yes, I was there when Alexandria Lugo made her professional debut.” Trust us, you’re going to hear a lot more from and about this woman.

Her clarion expressive mezzo-soprano can caress a song or belt paint off the ceiling, but it is simply the instrument she uses to transmit to an audience a purity of feeling. Her lithe body is usually quite still, but it occasionally bursts out with an frenetic fervor to lead the troupe in a dance number. But most potent is her face with soulful eyes radiating reined-in pain or joy, and a smile that runs from rueful to joyful – all mirroring the shifting emotions of her character’s soul.

Every moment on stage, Lugo’s Aida wrestles in vain to reconcile the conflict of her regal responsibilities as a princess inspiring her exiled people and those of a woman who has finally found the all-consuming love many people only dream about. Lugo’s voice, her expressions, her bearing fiercely exude pride, intelligence and passion. And did I mention this musical theater student at Broward College is quite beautiful?

Okay, sorry, back to the production. Marquee has only produced one show before this, an off-the-radar Rent in the Township Theatre in Coconut Creek. So there was a paternalistic fingers-crossed sense on the part of this skeptic when co-founders choreographer-dancer Ben Solmor and director Andrew Shultz said they specialize in large-scale musicals solely with local non-Equity talent. And they would jump out of the box with this 2000 musical that is a particularly ambitious undertaking for a freshman company.

Well, shut my mouth. No, this production isn’t perfect, but it’s rare that a nascent professional theater troupe starts out with this strong and stirring an early effort marked by powerhouse singers and evocative choreography so well-executed – all by a group of artists who, with three exceptions, are unknown to even the most regular theatergoers in the region. Despite a limited budget, Shultz, Solmor and a cast of 22 have filled the stage with soaring sounds and engrossing visuals.

Aida the musical is drawn from opera singer Leontyne Price’s children storybook adaptation of Verdi’s classic about the doomed love affair between Radames, an Egyptian warrior betrothed to the Pharaoh’s daughter Amneris, and the captured Ethiopian princess trying to remain incognito during the enslavement of her people.

This version is awash in Disney-fied pointedly 21st Century messages about believing in yourself, self-empowerment, political venality, racial pride, etc. etc. etc. Verdi’s librettist would barely recognize it. But everyone in this company sells it like it was gold.

A prime asset here is Solmor’s choreography, which can be, by turns, as graceful as Martha Graham, as kinetic as Alvin Ailey, or as frenetic as the gyrations in a local dance club. Other than a couple of acrobatic moves that he has graced several local shows with, Solmor never draws attention to the fact that he is also dancing in the background.

As the melding aesthetic for the show, Shultz, too, shows a lot of promise and talent. He has a similar bent for physicalization when the lovers are intertwined, exploring each other emotionally and corporally, first tentatively then with unrestrained rapture.

The praise for Lugo should not give short shrift to the only cast member you may have seen: Bruno Faria who made a similarly spectacular bow last season in Slow Burn Theatre’s Bonnie and Clyde before he had received his college diploma and then as Roger in its Rent. He brings an earnest honesty to the underwritten role, convincingly tracking Radames’ evolution from a marginally decent soldier into a man transformed by love. He looks a little like a young Russell Crowe, except he does have a fine belting tenor perfectly suited to the rock ballads.

Darcy Hernandez has no trouble with the vain self-centered princess – in several senses of the word – and she nails her comic numbers like the Motown-inflected “My Strongest Suit,” which she makes a showstopper. But her character’s later transformation into an empathetic human being is not quite convincing.

Elijah Wood, a tall dread-locked figure of empathy, portrays Radames’ longtime manservant Mereb. Nathan Mays is Radames’ corrupt father Zoser (wasn’t that the demon in Ghostbusters?) and has a voiced well-suited to the Elton John score, but isn’t persuasive in his evil persona.

The leads get earnest, energetic backup from the secondary actors and singer-dancers in the chorus. Some of their acting chops are a little rocky (this is a very young ensemble), but their musical and terpsichorean talents can’t be faulted. They include Victoria Anderson, Brettnie Blake, T. Brandon as Aida’s father, Alee Cacciatore, Taurean DeVoe, Jonathan Eisele, Richard Forbes, Robert Geils as the Pharoah, Elianna Ghen who also sewed many of the costumes, Mark Hernandez, Alissa Kane, Eddie Morales, Gianina Mugavero, Abi Perl, Andre Russell and Alyssa Trapani.

It should be noted that some of the shortcomings in the performances is because the material itself is flawed. Aida is a pop operetta undercut by a distractingly eclectic score (literally phoned in by Mr. John who reportedly never came to a rehearsal) and some banal lyrics that few people would associate with Mr. Rice, the man who penned the incisive Evita.

Worse is the manipulative watered-down-by-committee libretto by the estimable David Henry Hwang, Chicago director Robert Falls and Linda Woolverton who penned the fine script for Beauty and the Beast, but here produces a schematic check-off-the-memes framework usually found in a Lifetime Movie.

The most experienced hand in the entire production by a couple of decades, and perhaps the most valuable resource, is the veteran musical director Phil Hinton. His skill is evident in the polished vocal performances he has elicited not just from the leads but the ensemble as well. Of course, the full swelling sound of an orchestra here is thanks to digital tracks.

Among the production’s virtues is the best sound quality we’ve ever heard in that infamously problematic auditorium, apparently overseen by Lance Blank and implemented by Traci Watkins. The economical and very sketchy sets by Mike Versetti (sometimes there’s nothing on stage at all) don’t seem chintzy because the intricate lighting design by Shultz and Nick Morelli consistently establishes a different time, place and mood for almost every scene. For instances, several dances occur in dramatic silhouette and many tableaus are accented with swirling patterns of light. The simple but effective costuming was designed by Solmor including the required fashion show parade of gowns during “My Strongest Suit.”

The troupe has taken up residence in the West Boca Community High School, which had been home until now to Slow Burn Theatre Company. If lovers of musicals were hoping not to have to trek to the edge of the Everglades anymore, we’d suggest they surrender and gas up their car to see this Aida.

To read a feature story about the new troupe, click here.