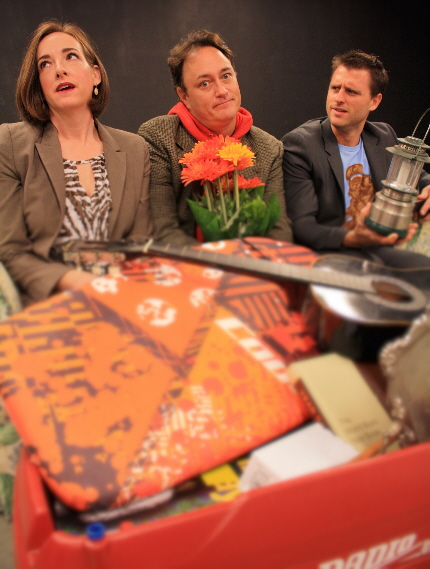 Erin Joy Schmidt and Matt Stabile, right, are dismayed by the junk that Todd Allen Durkin has brought home in Uncertain Terms at The Theatre at Arts Garage / Photos by David Nail

The key to enjoying world premieres like Uncertain Terms at The Theatre at Arts Garage is to understand that you are seeing a work in progress as opposed to a polished product bruited on Broadway or enshrined in print.

That was the educational legacy of Arts Garage’s progenitor Florida Stage – teaching an audience how to appreciate the first appearance of a work in the new paradigm of playwriting. An evolving script may not be “finished” (such as Death of a Salesman’s bow in 1949) until perhaps a third or even fourth full production.

So picking out what works and what doesn’t is part of the reason to look in on Allison Gregory’s flawed but droll exercise in quirky whimsy about an unusually extended family laying conflicting claims to the same home. How whimsical? One character is a bat-guano crazy who talks to an imaginary pet and another is a ghost. Some members of the “family” are related by blood. Others just don’t choose to leave a house that feels like sanctuary.

The flaws in the thoughtful script are minimized by the leadership of artistic director Louis Tyrrell and a merry band of five deft actors successfully negotiating the accumulation of eccentrics and peculiar situations. If the play works, it’s because they commit completely to this increasingly daffy but strangely intriguing tale.

At the risk of spoilers, we’ll sketch some of the pieces. Harry (a wonderfully idiosyncratic Todd Allen Durkin) is a gentle but demented soul who has returned to the house in which he cared for Carol (the always fine Barbara Bradshaw) a spiky disconnected mother who was dying of cancer. The play opens a year after her death. Carol’s estranged grown children Dani (Erin Joy Schmidt), an uptight corporate executive, and Matthew (Matt Stabile), a drifting slacker, need to sell the vacant homestead because Carol’s estate is drying up. But Harry, acting as if he just got out of the booby hatch or jail, contends that Carol promised he could have the house.

The local realtor Paula (Beth Dimon at her best) is trying to snag a buyer for the property while her husband recovers in the hospital from a fall. A young mystery woman Tawnee Faithful (Jody-Ann Henry) appears in the second act to complicate everything.

This set-up does not begin to capture the daffy humor and overall compassion that Gregory imbues in the ensuing clashes. Few plays these days attempt to create that mad cap sentiment that characterized film comedies of the 30s and 40s like Topper or Bringing Up Baby, or the stage plays that celebrated eccentrics like Harvey or You Can’t Take It With You.

It’s a tough target to hit and Gregory is on her way to finding it, but Uncertain Terms doesn’t land as solidly or as satisfyingly as she or the audience hope. It feels a bit unfocused. We are not always sure what we’ve got here or even where we are as the story progresses. Are we in the present? Is this a flashback? Can this or that person see and hear the ghost? Is the ghost just a figment of someone’s imagination? Is it supposed to be a broad comedy, a family drama, a dramedy? When the answer to all these questions is yes, it takes some more shaping to make it feel like a whole. Patrons unable or unwilling to stretch their arms around this still-gelling mass will likely walk away in frustration.

But we’ll argue that Tyrrell and company have done well by Gregory’s zany yet benevolent vision. Durkin has accumulated every comic tic he has ever discovered in his outstanding career and skillfully arrayed them into this naif blithely bumping into life’s furniture with a mildly quizzical air. His characterization initially seems way far out there (at one point he duckwalks like a goose), but actually is in sync with Gregory’s vision.

Bradshaw, once again, finds all the complexities in a role; Carol seems like a loving earth mother to some of the characters and a chilly judgmental creature to others.

Schmidt and Stabile are fine as well, but the honors for the night go to Dimon who delivers a heart-rending scene at the end of the first act, served up with such persuasive truth that it cuts through the ridiculousness of the emotional change she is depicting. Then in the second act, well, we don’t want to spoil it, but she shows a different side of her character with, again, total believability despite a cartoonish situation.

Mounting a work in progress like this is an apt and bittersweet event. Unbeknownst to the opening weekend audiences, Uncertain Terms is to be the last play from four-year-old Theatre at Arts Garage under the leadership of its founder Tyrrell. To read more about his resignation on Monday, click here.