Uplifting Man Of La Mancha Sallies Forth At The Wick 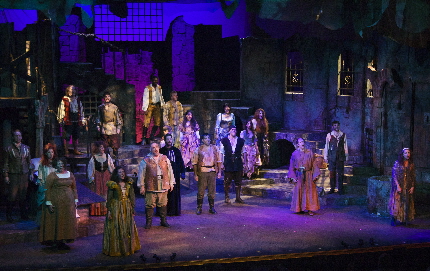 In 1965, America was newly awash in a painful harsh reality of a divided disillusioned country. The hope and optimism of the Kennedy Era had been annihilated by an assassin’s bullet just two years earlier. The tumult of the Civil Rights movement was swelling. War in Southeast Asia was ramping up.

The reaction was legendary and, in some cases, inspiring enough to be transformative: Audiences wept at a reminder — not only of innocence lost — but amidst such an ominous zeitgeist, a reminder of the resilient potential of the human spirit to prevail.

As that spiritual disaffection calcified into a soul-numbing norm in the ensuing half-century, it has been rare that productions of Man of La Mancha have reached that sublime level of affect.

But the material is just so powerful and well-constructed that when it receives such a solid outing as The Wick Theatre’s fine moving edition, audiences catch a glimmer of what it felt like 50 years ago. At the reliable finale, which tightened throats and rends tear ducts even when Robert Goulet botched a tour, the Wick crowd we were with could barely wait to give a standing ovation — not the perfunctory one bestowed by Florida audiences on Disney On Ice: Pumbaa Goes Wild, but a genuine outpouring of gratitude.

The Wick has applied its craft, taste, talent and budget here in service of meatier property than any before it. That has paid off in a more satisfying production than less-endowed attempts mounted by schools, community theaters and modest professional companies. This quality was reflected in the talent of the cast, the sets, lighting and, of course, the wardrobe drawn in part from The Wick’s Costume World Theatrical, all unified under the seamless liquid staging of director Dom Ruggiero.

The show, of course, does not recreate Miguel de Cervantes Saavedra’s 1605 masterwork Don Quixote so much as depict what inside Cervantes’s own tragedy-blighted life that had inspired his creation of a daft hero. The core of the musical is a Cervantes created by bookwriter Dale Wasserman who questions whether true madness is “to see life as it is and not as it should be.” The joy of storytelling through theater imbues every moment of both Wasserman’s script as well as The Wick production.

Arguably, most of the original cast memorialized on the cast recording and critics’ reviews can not be bettered. But The Wick has gathered a skilled company. Ruggiero and his capable star, George Dvorsky, know the superb Joe Darion-Mitch Leigh score can take care of itself, so they have worked hard and successfully highlighting the equally rich script by allowing Dvorsky to bring out all the vibrant content of Cervantes/Quixote’s speeches. 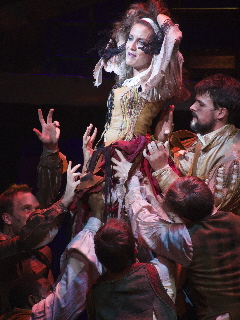 Alix Paige as Aldonza is assaulted by muleteers

Resident Stage Director Ruggiero, who helmed the company’s The Full Monty, has injected personal touches and emphases. For instance, the show usually opens with a stirring brass-heavy overture. But Ruggiero and musical director Michael Ursua cut to peasants strumming Spanish guitars, a singer calling out to the audience from a balcony and then an extended pas de deux from some flamenco dancers choreographed by Angela Morando-Taylor. It has little to do with Man of La Mancha, but it does create a pungent environment. Ruggiero regularly inserts tiny grace notes such as when the shards of the fatal mirrors close in on Quixote to expose his madness, they form a cross.

He stages the muleteers’ rape of Aldonza as pretty strong stuff, especially when she is branded with a hot iron. But Ruggiero keeps the entire show moving smoothly and at a surprisingly fast clip, especially the opening scenes.

Finally, Ruggiero and Ursua made an intriguing choice in delivering the iconic and overexposed anthem, “The Impossible Dream.” They have Dvorsky speak the opening verse which underscores its meaning and admirably disconnects it from versions that the audience will just mentally plug in and turn off what’s happening in front of them. But Dvorsky has a serviceable voice and he does justice to the sung remainder.

Two important issues about the music: The first is that the current version of the score is orchestrated for about 15 musicians. Due to economics and the need for a full sound, The Wick has opted for digital tracks instead of a live orchestra. But here’s the thing: We have insisted a dozen times that a live band is preferable to prerecorded music for several reasons. But, in this case, the quality of the tracks, the editing and remixing of them, Justin Thompson’s sound design, the upgraded sound system and the sound board operator were such that we simply did not realize that it wasn’t live. We only discovered this after the show when we asked management why the band wasn’t listed in the program.

The second point may or may not be related to recordings, but we doubt it. Performers regularly sang lyrics off-beat, literally, as if they could not hear the tracks on stage. Perhaps it was a liberality in phrasing that musical director Ursua allowed or even encouraged given how frequently this happened even in his own vocal performance as the Padre. We truly appreciate occasionally straying from strict adherence to the charts to underscore an emotion. But it was terribly distracting to hear over and over and over; it gave a sense of sloppiness when the sung notes did not land solidly on those being played by the “orchestra.”
But that is the sole complaint of the whole show other than a few missed notes vocally.

Dvorsky, a veteran pro, is perfectly adequate as Cervantes, but he comes alive (as in fact the script wants) as a vibrant Quixote with an impassioned lifeforce. He becomes a more assured and strong entity even with a voice that intentionally quavers with age.

The silver-voiced Alix Paige plays Aldonza/Dulcinea as she did last summer in Palm Beach Dramaworks’ concert version with the stunning William Michals. She has more opportunity here to show her ability to sink her acting chops into the script, such as convincingly charting Aldonza’s gradual slip into Quixote’s dream. While she still seems a bit well-scrubbed and well-behaved to be the slatternly kitchen wench who surrendered years earlier to a brutal world, she brings real fire to her songs, especially, the agonizing accusatory song, “Aldonza.”

Robert Anthony Jones exudes admirable loyalty in merry chubby Sancho with able support from Troy Stanley as the Governor and Innkeeper, Ursua as the compassionate Padre, Jinon Deeb as the daughter Antonia, Shane Tanner as the lead muleteer, Patrick A. Wilkinson as The Duke and Dr. Carrasco, and Becca McCoy as the housekeeper.

The production benefited immeasurably from the outstanding rendition of the dark, dank dungeon for the Spanish Inquisition created by Megan V. LaLonde. This ring of hell constrained by stained stone walls and featuring a long curved stairway was turned into a dozen other locations during Cervantes’ tale thanks to the nimble evocative lighting from Jose Santiago in which rays seem to be fighting their way through the gloom. Both produced an almost tactile texture of deterioration.

All of these talents combine in this production for an ultimately uplifting reaffirmation of the transformative power of the inherent goodness of the human spirit.

Note: The Wick clearly has succeeded in plugging into what some mainstream audiences have been longing for if they did not want to drive as far north as Jupiter. It has increased the number of season subscriptions from 235 its first season to 1,500 this season. The first two previews of La Mancha were sold out. 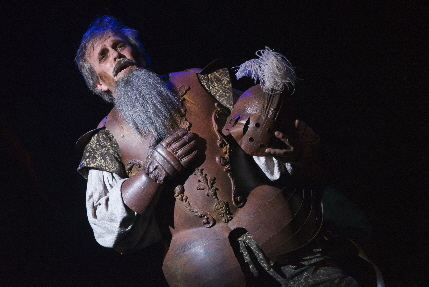