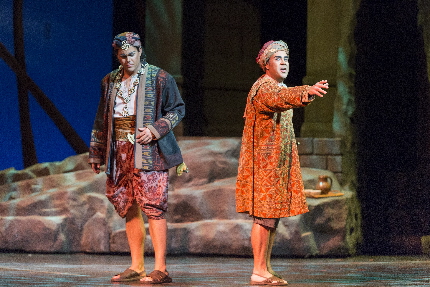 The audience is not likely to be emotionally transported by the Florida Grand Opera’s production of Georges Bizet’s The Pearl Fishers, but the skills of the principal singers exuding unusually convincing passion make the evening worth a visit.

From the heroes’ famous bro-mance duet in the first act to the heroine’s mediation in the second act, this schematic love triangle is delivered with enough vocal and acting conviction to paper over the predictable plot that must have seem old hat even when Bizet made his reputation with this first major work in 1863.

No matter, it is the music here that is important and FGO has produced a no-excuses-needed evening with baritone Corey McKern in his FGO debut as Zurga the newly-crowned leader of the fishermen, tenor Phillipe Talbot as his old bosom buddy Nadir, and soprano Sydney Mancasola making her FGO bow as priestess Leila, the fatal obsession of both men.

Briefly, the story, set in a rural village of pearl fishermen in ancient and exotic Ceylon, tells of the two friends reunited after years of separation. They had left each other after making a solemn pact not to pursue a gorgeous young woman they had both seen and fallen in love with.

Well, of course, the lovely Leila appears as the new priestess serving the fishing village. Nadir breaks the vow and has chaste relations with the supposedly virginal untouchable holy woman. The spurned and betrayed Zurga, with his unlimited power, sentences both to death per the village’s laws, but later (200-year-old spoiler alert) helps them escape and faces the community’s wrath.

Before Leila reappears and has got them on their knees, Zurga and Nadir have a duet reaffirming their friendship while recalling their first sight together of Leila. That duet “Au fond du temple saint,” is justifiably one of most renowned in the opera canon, especially for two men. McKern and Talbot do it justice with their tenor and baritone voices swirling around each other, playing off each other, blending then separating, then coming together again.

What was especially impressive from Row J in the Arsht Center was the singers poured their acting chops into the performances. At one point in the song, as Nadir recalls Leila, Talbot’s face becomes transfixed with the memory and McKern’s visage evinces shock and fear that Nadir remains so deeply in Leila’s thrall.

Mancasola’s expertly trills up and down the scale in her arias such “Comme autrefois dans la nuit somber.” While her acting is not quite as persuasive, she has a clear clean tone well-suited to the score.

The principals switch off in a mix-and-match schedule. The others are Will Hughes as Zurga, Daniel Bates as Nadir, and Emily Birsan as Leila in her FGO debut.

The orchestra was conducted by Antony Barrese of Opera Southwest in his local debut, the first time this season that FGO’s principal conductor Ramon Tebar was absent from the pit. The playing seemed technically unassailable, perhaps a little too subdued and emotionally muted on occasion but showing itself equal to the power required for the more fiery sections.

The physical staging by director A. Scott Barry was serviceable enough but pretty pedestrian, showing little imagination or vitality. The pacing was especially leisurely, bordering on plodding between arias with crowds taking a very long time to stroll on and off the stage.

The visual elements made up for it with a vibrance of their own, notably the sets designed by J. Michael Wingfield (evocatively lit by Donald E. Thomas) and exotic costumes by Howard Tsvi Kaplan, both for an earlier Sarasota Opera production. Fort Lauderdale dance instructor Ranjana Warier choreographed the frequent “authentic” native dances that added the only real exotic flavor to the show other than the costumes.

The Pearl Fishers was the popularly received but mixed critical success that brought the young Bizet to the attention of the music world. Unfortunately, he would die only 13 years later in the wake of the dumbfounding rejection of a little known work with no future, Carmen.