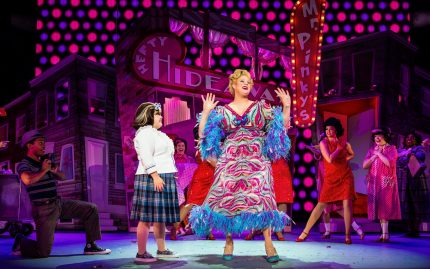 Welcome to the 60s: Niki Metcalf as Tracy Turnblad and Andrew Levitt as Edna Turnblad in the national tour of Hairspray /Photo by Jeremy Daniel

In this fourth or fifth reconnection with the glee-filled and glee-inducing musical comedy Hairspray, a truly apt term, what surfaced at the national tour’s all too brief bow at the Arsht Center this week was how this charmer is actually about dreams.

Every character has or had a dream – not just the plus-size Tracy wanting to dance on TV, wanting to link up with heartthrob Link and wanting to integrate her world.

Edna has abandoned her dreams of being a fashion designer. Penny dreams of standing up to her mother. Wilbur dreams of a world-wide joke empire.  Link dreams of being the next Elvis. Velma dreams of a stable, preferably white-dominated society. Motormouth Maybelle dreams – and it is still a barely imaginable dream in 1962 – of a world of racial equality and justice.

And everyone dreams of finding lasting self-respect.

Drenched in period references that will bring a smile to half the audience and a bewildered nod from the other half (Who is Perry Como and what’s funny about Eddie Fisher?) it creates a Never Neverland for its survivors that did not quite exist this way but many wish it had. That in itself is a dream.

This may seem a weighty observation for this now venerable broad comedy memorable for witty lyrics, a brilliant pastiche of period music as Sondheim did in Follies, a faithful interpretation of the plot in John Waters’ film, a large-scale man dressing up as a large-scale woman, and two of the most rousing musical production numbers in modern theater this side of “Oklahoma.”

But this Broadway Across America tour not only vibrates with vitality and visibly allows this cast to nearly explode with the joy of doing what they love, but subtly underscores the admonitions for people to follow their dreams and stay loyal to one’s self.

And in this current moment of racial tumult, rethinking body types and other facets, the social issues that have always been right there in the show echo a little louder.

Don’t take this for granted. The 2016 television LIVE! version was inexplicably blah. And the 2006 film with John Travolta was embarrassing.

But if you’re familiar with the show, simply the first opening notes of “Welcome to the 60s” is a rejuvenating celebration for spirits battered over the past two years. And you likely will be mumbling “the motion of the ocean” on the entire drive home.

Of course, the first or second question is how good is the actor playing Edna. Andrew Levitt is appropriately subdued in the first scenes as the life-defeated zaftig laundress with dishwater hair and spirit. He lacks the innate charisma of Harvey Fierstein in those scenes, but his heroine comes alive later on and is a welcome source of energy after that. And unlike Harvey, he can sing. By the way, the second sentence in his Playbill bio is “He has performed as drag queen Nina West since 2001 and competed on Season 11 of RuPaul’s Drag Race.” That may account for his ease in inhabiting Edna as a real woman, not as an actor doing a novelty turn.

But the driving force is the vivacious performance of Niki Metcalf as Tracy. Trot out the adjectives: Ebullient, winning, you list it. And a powerful voice brimming with optimism and elation.

The entire very large cast is first-rate (including some understudies opening night) directed on tour by Matt Lenz copying much of Jack O’ Brien’s work, and Michele Lynch “recreating” the choreography by Jerry Mitchell. Every Pepsodent-smiling body on stage seems to be beaming.

But an insufficiently brief nod to Addison Garner as the blond Cruella de Ville of Baltimore, Velma; Christopher Swan, as the adorable Wilbur, understudy  Micheal Corey Hassel going in as Seaweed; and Toneisha Harris for her stirring gospel-blues-soul riff on “A Change Has Got To Come” with the anthemic “I Know Where I’ve Been.” If people hadn’t stopped giving standing ovations mid-show these days, they’d likely still be on their feet in the Ziff Ballet Opera House.

Under all the laughter, the work of all the creative folks — Mark O’Donnell and the late Thomas Meehan’s book, Scott Wittman and Marc Shaiman’s lyrics, and Shaiman’s score — is some of the most skilled in the genre.

The sound quality is a mixed blessing. On one hand, every note of the score played by a skilled band can be heard on Collins Avenue across the Intracoastal. On the other hand, it often drowns out some of the hilarious inventive lyrics.

Side note 1: The Arsht has worked out a commendably smooth way to check for vaccination proof among the hundreds of people coming to the show involving more than a dozen employees manning a half-dozen tables outside the building. Kudos are due.

Side note 2: Remember that tickets are being sent through your cell phone or  mobile device and must be shown at the door that way.

Side note 4: The Arsht warns you rightfully so to build extra time ahead of a performance because (a) the aforementioned scarcity of nearby parking (b) the commendable Covid precautions and (c) the insane mixmaster of highway problems from the mess that is I-95 from 3 p.m. to 10 p.m. and then the unbelievable Matrix-worthy madness of I-395 in which, among other idiocies, coming east from I-95, you exit left not right.

Side note 5: It seems that most of the national tour dates across South Florida are only a week-long this season, likely because producers feared audiences’ willingness to attend during the pandemic. So check out our calendar here  and get tickets early.

Covid Protocol: A recent negative COVID test is required for entry. Voluntary proof of vaccination is also accepted. Masks (over the mouth and nose) are required for all guests (ages 2 and up).

This entry was posted in Performances, Reviews and tagged Adrienne Arsht Center, Broadway Across Miami, Hairspray. Bookmark the permalink.