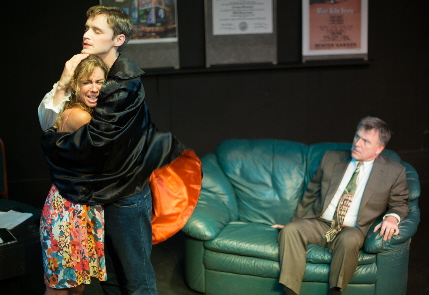 Imagine if the writers at Saturday Night Live created an evening of comedy skits with a Twilight Zone/Rocky Horror sensibility. They’d probably produce something akin to The Monster Project, a quartet of playlets by local writer Brian Harris mounted by Playgroup LLC.

When the evening succeeds, it’s thanks to Harris’ whimsical premises powered by an indefatigable cast led by director Joyce Sweeney. But the entertainment level veers from mildly funny to a shrug because as engagingly wacky as the basic ideas are, these vignettes run way, way too long. Harris’ droll setups aren’t substantial enough to support skits that run a half-hour.

Per the title, the episodes staged at Empire Stage in Fort Lauderdale are populated by a fire demon, a vampire, a body snatching alien, a werewolf, the cast of a fantasy warfare game and some lonely quirky humans. Some of the four pieces work better than others; even the cute ones drag at some point. All have an Alfred Hitchock/O. Henry twist. There’s little internal logic in any of the narratives, but that’s not the point, after all.

Trying hard not to give away too much, the offerings are:

The Pattern: In the strongest piece, ditzoid Sunny (Teresa Biber) brings her date to a psychiatrist because her strong, silent beau is asking for a long-term commitment. Biber is undeniably funny as she spews out her anxieties non-stop like a torrent gushing from broken faucet. The doctor (David Meulemans) is trying to leave for what sounds like another appointment and the mysterious boyfriend (Christopher Mitchell) looks on ominously with hooded, haunted eyes and occasionally chimes in with a deep resonant voice emanating from several stories below us.

The Grandfather: Slacker Maury (Mitchell) is obsessed with fantasy gaming on his computer to the despair of his mother (Clelia Patrizio). But the line between reality and fantasy disappears when his doddering grandfather (Meulemans) moves in and fails to take his meds.

Binder: Biber tries to get gay friend Gordon to become romantically interested during their outings to grade-Z monster movies.  But when he gives her a bracelet he bought from a witch in Colombia, Biber summons up a wickedly funny fire demon who won’t leave her alone. Mitchell, dressed in a crimson spandex body suit and horns, delivers the funniest performance of the night, contorting his slender body into more posed angles and bends than a Martha Graham dancer. But the skit goes on and on and on including a dance sequence that lasts at least three or four minutes all by itself.

One plus in Harris’ scripts that is usually missing from the stage in South Florida theater companies’ addiction to short plays: He has worked to establish an actual narrative arc during which characters change or learn something. Simply, something happens. This is so rare in local 10-minute play festivals. Most playwrights (and we do mean most) grossly underestimate how difficult it is to write a short work, comic or tragic. They think a cute idea is all you need. It isn’t. So praise to Harris on that score. He just needs an editor.

Harris is a native of Hollywood who spent most of his life as a stock analyst in New York and now lives in Miami Beach. His short plays have won the Strawberry One-Act Festival twice, and the Jean Dalrymple Award for Best Comedy Playwright at the American Theatre of Actors. His Off-Broadway production of Tall Grass is published in Samuel French.

Playgroup LLC is a professional company committed to helping local playwrights develop. Until now, the troupe has mostly mounted staged readings of works in progress. The Monster Project reportedly is its first fully-produced show.

The Monster Project produced by Playgroup LLC is performed at Empire Stage, 1140 North Flagler Street in Fort Lauderdale (north of Sunrise, east of the train tracks) 8 p.m. Thursday-Saturday, 5 p.m. Sunday. Running time about 1 hour 45 minutes including 15-minute intermission. Tickets are $25 including complimentary wine.  Tickets at www.empirestage.com or at www.smarttix.com, at the door or by calling (954) 678-1476.

To see a promotional video by George Wentzler, click here.