Wick Takes A Chance With Mixed Bouquet Of Steel Magnolias 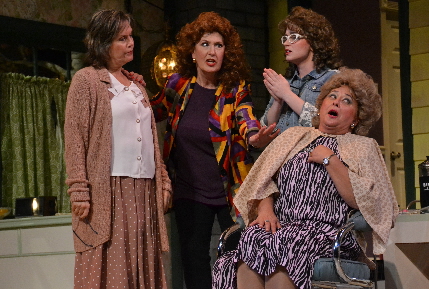 The Wick Theatre has trotted out some sprawling musicals in its first season, so it couldn’t be demure when picking its first non-musical production. Producers chose Steel Magnolias, approaching it in the same broad way as their premiere season that featured such extravaganzas as White Christmas, Sound of Music and 42nd Street.

The Wick curtain opens on the theater’s first ever in-house built set, which, on opening night, received its own rousing applause. Resident scenic designer Sean McClelland created Truvy’s Beauty Salon, the centerpiece of Steel Magnolias. McClelland, whose fantastic set for August Osage County at Actor’s Playhouse won the Silver Palm Award, finds some of Osage to imbue in his Magnolias set, especially the vastness of the space and his ever-present attention to detail.

The set is truly something to behold with its specificity that’s true to the script — Truvy Jones reveals that the salon was created with some sprucing up from her husband — a build out of the Jones’ garage. McClellan has successfully captured the realistic refurbishedness.

Norb Joerder, who was behind the magnificent Wick production of 42nd Street, directs Steel Magnolias (another director, Stacey Stephens was originally slated to helm the production, but Joerder was apparently asked to take over). With only 10 days to work with the cast, he was able to pull together Robert Harling’s 1987 play and, to his credit, avoids creating a stage version of the famous movie that heavily relied on celebrity casting despite Harling’s acclaimed stage play having strength on its own without having to draw audiences in with Hollywood names (Harling wrote the film’s screenplay, too). Yet the famous 1989 film adaptation is what the audience finds familiarity with. No doubt that was a consideration in the Wick selecting it for its audience, who are already getting used to the theater’s knack for presenting known pieces.

At intermission, patrons traded trivia, trying to outwit each other about who played who in the 1989 film adaptation: “Which one was Shirley MacLaine?” (Ouiser Boudreaux) “Who played Truvy?” (Dolly Parton).

The cause for their questions is (thankfully) because of Joerder’s approach. There isn’t much copycatting of the movie here (save for Linda Farmer’s channeling Daryl Hannah’s movie turn in Magnolias as Annelle). But Joerder, instead, digs into the women’s relationships, Southern womanhood, and their reliance on each other, no doubt due to small town living.

Steel Magnolias focuses on six women of varied ages in the Louisiana parish of Chinquapin. The audience is taken along over three years, circa 1980s, as the friends regularly gather on Saturdays at the hair salon. In a man’s world, this is a locker room or barbershop. Like those male haunts, secondary here is the service that’s performed, primary is the camaraderie.

The play begins on the wedding day of Shelby Eatenton (Alison McCartan). It’s one of the bigger events to happen in Chinquapin. Her mother, M’Lynn (Aaron Bower), while happy about her daughter’s wedding, is distracted from the joy because of her concern for the girl’s health. Shelby is a type-1 diabetic and has limitations due to the lifelong chronic disease; it has stifled her in many ways, but mostly the stunting is due to her mother’s overprotective ways.

Other patrons of the salon are Clairee Belcher (Sally Bondi), the widow of the parish’s previous mayor, and Ouiser (Robin Proett Olson). On this particular day at the salon, Truvy has hired another stylisht, Annelle Dupuy-Desoto (Farmer), a 19-year-old who is new in town with a past and a present that she’s keeping secret.

On opening night, there was a forced connectedness among the actresses. They fared better during duo or trio pairings than when the script called for group dynamics. No doubt the Wick’s Magnolias’ cast will become more of an ensemble as the run continues.

Highlights were Bondi and Olson’s interaction as the two older friends, Clairee and Ouiser. Bondi inhabits the former first lady of Chinquapin. The actress brings her own quippy style and staccato delivery to some of the play’s most humorous lines and creates an original character that is far from the film role (Olympia Dukakis played Clairee in the film for trivia buffs).

Proett Olson is the other actress to watch as crotchety neighbor Ouiser whose ways are set in stone. “I’m not crazy; I’ve just been in a very bad mood for 40 years,” she deadpans. Proett Olson’s Ouiser is genuinely developed and spectacularly wry. When the two of these gals volley their insults back and forth, the timing is spot on and will only get snappier as the run proceeds.

Bower who was just seen in Wick’s 42nd Street approaches M’Lynn cautiously, which doesn’t provide the necessary build up for the mother-of-the-bride’s near breakdown in Act II. McCartan, another standout in 42nd Street, doesn’t quite convey the fragileness of Shelby, instead playing the role more on the surface than giving a hint that there’s deeper angst here because of her sickness and her mother’s doting. Shelby’s relationship with her mother is one of the most complex written in a contemporary play, yet the chemistry here lacks the necessary drama to make this resonate.

Truvy, the den mother of the group, is played by Patti Eyler, and while this character has her own share of wonderful wisecracks, Eyler’s Truvy is played close to the vest, never really giving the air that this is her shop or that she’s comfortable in the space. Further into the run, here’s hoping that Eyler adds dimension so that we all feel at home in Truvy’s comfy shop.

The Wick consistently gets my commendation for taking risks so soon out of the gate and I once again offer kudos for taking a chance on Steel Magnolias. Yet the vastness of the theater lends itself better to their big, brash musical presentations than a show such as this that requires more intimacy. It comes across subtly as if the ensemble and the director had to wage battle against the space in trying to create that intimacy. Also, putting microphones on the actors would have cut down on some of the lines that were lost to the mostly senior audience who ask each other in less than hushed tones, “what did she say?”

See Magnolias for all of the lovely elements the Wick’s production contains and its insightful direction by Mr. Joerder.  Some of the thornier aspects should eventually get worked out and by no means are they a reason to dismiss a night of sweet Magnolias at the Wick.

This entry was posted in Performances, Reviews and tagged Norb Joerder, Robert Harling, The Wick Theatre. Bookmark the permalink.