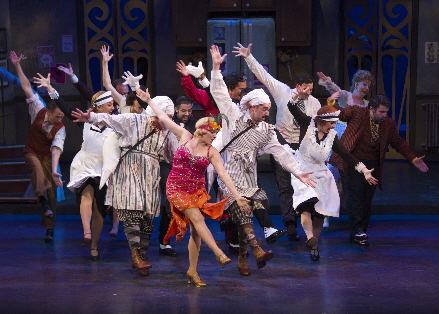 Surely The Drowsy Chaperone, which premiered on Broadway in 2006, cannot be considered a warhorse. But it’s galloping swiftly toward that distinction, on the strength of national tours, regional productions everywhere from Japan to Brazil, and frequent inclusion in community and high-school theater seasons.

But mostly it’s the dexterous tone of this piece that conjures a familiar, if newly minted, classic. When done well, The Drowsy Chaperone is at once a celebration of bubbly Depression-era musicals and a self-aware deconstruction of the same. It feels warhorse-y because the characters in its show-within-a-show are deliberate stereotypes, echoes of a sturdy period of iconic innocence in musical theater.

But by winking at the audience and playing it straight at the same time, quality productions of The Drowsy Chaperone operate on two levels simultaneously, offering entertainment and commentary, mothballed comedy and existentialist observations. It’s a show for both the Brechtian scholar and his provincial grandparents.

This is a challenging needle to thread, but the Wick Theatre’s marvelous and contemplative rendition pulls it off with boundless charm and effortless sophistication. The Wick has enjoyed its share of highlights over the past five years, but this Drowsy Chaperone might just exceed its 42nd Street and Oklahoma! as the young company’s pinnacle, from its charismatic lead and perfectly curated ensemble to Dom Ruggiero’s inspired, superlatively paced direction to a fluid, dynamic technical palette.

Any assessment of The Drowsy Chaperone must begin with the casting of the Man in the Chair, the dramaturgical hinge on which the entire show swings. And Bruce Linser, lately a director for MNM Productions, makes a triumphant return to the front of the floorboards, capturing the narrator’s childlike whimsy, encyclopedic zeal and undercurrent of melancholy with clockwork timing. It’s a performance that begins in the dark and has us at hello; within seconds, we’re pretty much eating out of his hand.

The Man in the Chair is a musical-theater fanatic, especially for the strain of madcap romantic comedies that spread like kudzu in Prohibition America. From his perch in a weathered throne in the stage-right corner of his New York City apartment, he rhapsodizes about his favorite show of the period—a fictional trifle called The Drowsy Chaperone—and proceeds to play its cast album for us, his captive audience. As if exhumed from the Broadway mausoleum by the crackle of vinyl, The Drowsy Chaperone springs to life around him, in all its antiquarian escapism.

As the Man in the Chair warns us, “the characters are two-dimensional and the plot is well-worn,” but he loves it anyway. The story pivots on the pending nuptials of Robert (Josh Franklin), a dim-witted industrialist’s son; and Janet (Jennifer Byrne), a Follies star poised to jettison her career for the domesticity of marriage. That’s assuming Feldzeig (Kevin R. Kelly), a parody of a cigar-chomping impresario, doesn’t stop her first.

Other characters include Kitty (Jeanine Gangloff), an empty-headed chorine who clings to Feldzeig like a hungry mosquito; Adolpho (Jacob Thompson), a scenery-consuming Latin lover; the title character (Laura Hodos), a lush who is patently terrible at her job of chaperoning the bride-to-be on her wedding day; and a pair of bumbling gangsters (Arrow Zurschmiede and Blake Aburn) posing as pastry chefs, armed with rolling pins and atrocious culinary puns. And—because why not?—there’s an aviatrix named Trix (Deidra Grace) whose biplane lands on the stage at the precise time the characters need one.

As the characters stumble through transparently obvious mistaken-identity tropes, over-the-top dream sequences and ludicrous comic set pieces, the Man in the Chair frequently freezes the action, breaking the Fourth Wall to share insights about the actors and philosophical musings about theater, acting as both cheerleader and critic of this “musical within a comedy.” Linser remains radiant throughout, even when he’s simply observing the action from his perch, pantomiming the actors’ stagey semaphores and smiling at the audience for validation during the plot’s more ridiculous underpinnings.

Part of The Drowsy Chaperone’s appeal is that the Tony-winning songs positively sparkle, from the percussive “Cold Feets” to the infectiously goofy “Accident Waiting to Happen” to the punchy “Toledo Surprise,” performed by a cast fully subsumed into the abject silliness. Byrne’s Janet is a hilarious dervish of energy during “Show Off,” in which her multitalented starlet literally jumps through hoops, among other vaudevillian stagecraft; and her Act Two highlight, “Bride’s Lament,” a manic fantasia supplemented by chiaroscuro lighting and a cymbal-crashing monkey motif that needs to be seen to be believed. (This inspires the Man in the Chair’s funniest line in the show: “That number has everything: A little Busby Berkeley, a little Jane Goodall, a little Fritz Lang.”)

Thompson, sporting a pencil moustache, silvery forelock and Transylvanian cape, nails Adolpho’s narcissistic lothario, albeit working with a similar toolkit he brought to the Wick’s Beauty and the Beast this past summer. Hodos is never less than enchanting as the tipsy chaperone; her flair for comedy and her seemingly limitless vocal range are equally on display during the anthemic “As We Stumble Along,” reminding us once again that she’s arguably the most talented person working in South Florida musical theater today.

Not to be outdone, Franklin, as the groomsman, and Courter Simmons, as his best man, light up the boards during the quicksilver tap showcase “Cold Feets.” The former also exceeds the gangly but controlled challenge of dancing on roller skates while blindfolded, during “Accident.” Angie Radosh and Barry Tarallo enjoy pleasant comic folderol as a forgetful dowager and an unflappable butler, respectively—but at the risk of picking nits at an otherwise exceptional production, their spit-take scene could use stronger timing.

Scenic designer Brittany Loesch has created a spacious loft full of vintage Broadway paraphernalia and abounding in hidden compartments that transform with liquid fluency. Jose Santiago’s lighting design bathes the stage in a rainbow of colors, including tactfully deployed washes of gold, blue and red. Even the musical tracks, overseen by Caryl Fantel, blend more effortlessly than usual this time around—after all, they’re supposed to be coming from a home stereo system. I dare say you won’t miss the live orchestra.

The appeal of The Drowsy Chaperone is certifiably evergreen, but the Wick even manages to find some contemporary relevance, which circles back to Linser’s standout performance. At the show’s climax, he conveys the crippling sadness underneath the spirited demeanor of the Man in the Chair with unusual poignancy, justifying mindless entertainment while revealing its limitations.

His voice quavering as the show winds down and reality looms, Linser laments the return to the “dreary horrors of the real world”—something we’re reminded of every time we switch on CNN or refresh HuffPost. For fans of musical theater, I can’t think of a better reason to tune them out than this sterling production.