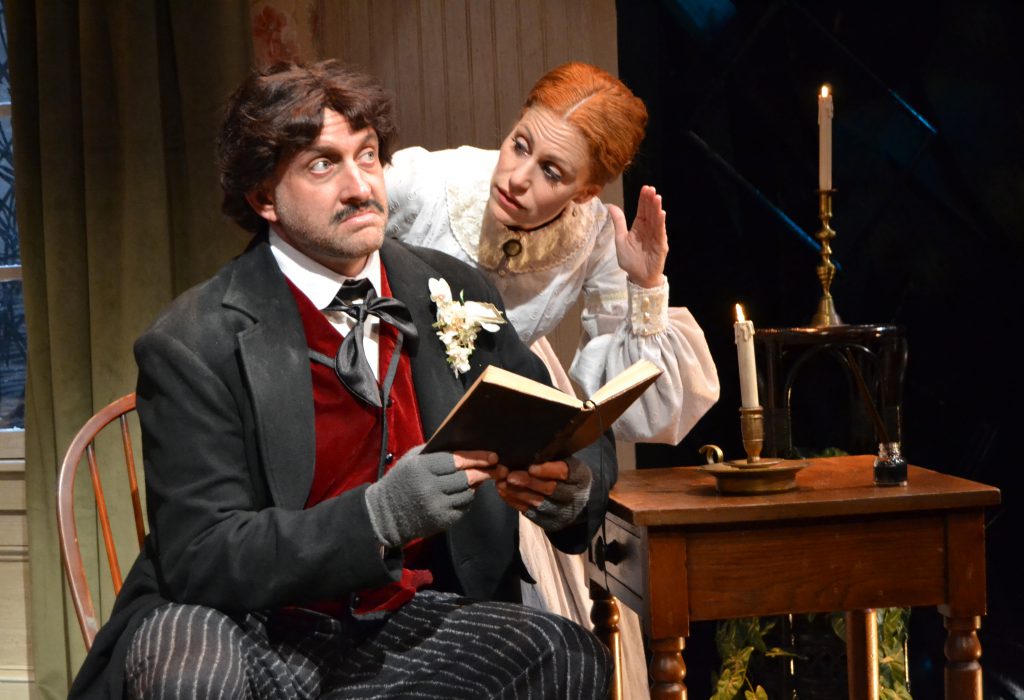 Edgar & Emily, the world premiere at Palm Beach Dramaworks, is a fascinating and funny fantasia about the dead Edgar Allan Poe visiting Emily Dickinson late one night dragging his coffin behind him.

Not at all meant as a faithful docudrama, Joseph McDonough’s wry play examines sensitive introspective artists’ challenge to be fully alive in the ever-present shadow of death – an evening laced with copious quips, bon mots and witty banter.

The pair’s ego-laden swipes at each other’s work are grin-inducing drollery and their reveries about wrestling differently with mortality land just as solidly thanks to skilled performances of Margery Lowe and Gregg Weiner under the hand of Dramaworks’ producing artistic director William Hayes.

The asterisk is that the intentionally incongruent tones don’t mesh or segue as well on stage as these parties heard in their heads. It feels like two plays interwoven, although you can perceive the valid vision of a compassionate meditation leavened with almost Noel Coward comedy. Or visa versa. Exactly whose fault the disconnect lies with isn’t clear, although McDonough can likely work on it in a subsequent version.

But within each of those two aspect, these four theater artists create a wry evening of chuckles and then insightful examinations of wildly dissimilar lives joined by the prospect of dying, death and the uncertainty of whatever follows — a bonding point for all humanity.

Edgar & Emily is the first work to emerge fully-formed on stage from the Dramaworkshop designed to develop nascent plays over a period of readings, workshops and multiple drafts, aided by a resident company of artists shepherding the work.

The tongue-in-cheek premise finds the petite Emily alone in her small bedroom on a wintry night killing time awaiting the return of her parents and sister. The exact way she is killing time is a hilarious conceit that sends a clear message to the audience that this is not some PBS American Masters program.

Ominous thudding reverberates through her door, followed by the crashing into the room of a tall dark stranger with haunted eyes. “I hope I’m not inconveniencing you,” he says, before pulling in his coffin.

He is Poe who ostensibly died 14 years ago. But he tells the stunned woman that he was buried alive as in one of his stories, then dug up by a spirit who said he would be pursued by a doppelganger bent on his destruction. His only protection as he went on the run would be by carrying his coffin as a constant reminder of death. This is emblematic of the play’s ingenuity and aforementioned problem – an  intentionally ludicrous set-up rife with comic possibilities that doubles as an effectively serious metaphor. Thus, amid the sharp comic rejoinders that these actors deliver expertly, Weiner gives a chilling monologue about what it felt like awaking buried alive.

Over the next hour, with considerable humor about artistic temperament, the two competitively critique each other’s work and defend their own with that falsely self-effacing tone of confidence that is anything but modest. Emily sniffs that Poe has awkwardly rhymed “at is” and “lattice” in “The Raven.” While rooted in the icons we have come to know, the four create far more complex people who elicit compassion as well as chuckles.

The play’s real strength is when the two quote their own works, almost unconsciously, to explain their artistic vision of life and death. This gives the audience even remotely familiar with their work, or at least their backstory, a sense of recognition. The actors invest passion and sincerity giving three-dimensional life to their abstract concepts.

The welcome surprise is McDonough makes it clear that their divergent views overlap in their joint obsession with mortality, views collegially shared while sitting together on Poe’s coffin. They prove this initially seemingly artificial and contrived mash-up is not only justifiable but cleverly a method to show the common questions we all face.

But some things do not land well. A penultimate scene meant to convey sudden terror seems false and mechanical. Still, the following final scene and its beautiful telling tableau redeem any misstep.

McDonough’s dialogue melds the stilted formalized language of the period with the poets’ unconscious compulsion to express themselves in flights of lyricism. For the not-quite-of-this-world Dickinson, this sits comfortably. But for Poe, with his life-puncturing weary cynicism, the mixture feels more at odds with itself.

The other minor flaw is McDonough saddles Poe with extraneous exposition. For instance, approximating here, “I’ll have you know I was one of the best known literary critics and considered the first major literary voice in America.” These lines don’t clang as loudly as they might because they are used dramaturgically to document a fragile but boastful ego. But they are jarring as they are in 98 percent of all plays about known historical figures. Oddly, Dramaworks’ last play, Terry Teachout’s Billy & Me about William Inge and Tennessee Williams, did not suffer this problem.

Hayes, who has worked with McDonough over a two-year period, knows how to stage the piece and how to get the most out of actors he was worked with repeatedly.

Lowe slips into Emily like a pale arm gliding into an evening gown glove. Her Emily vibrates with the resonances you have come to expect of Dickinson’s legend. But she makes believable an Emily who also has a playful spirit, a New England flintiness, a primly-expressed pride in her work and a sharp intelligence. Lowe is especially impressive when McDonough has Emily explain in completely credible terms why she lived a reclusive life, preferring to command and create her small universe with imagination.

Weiner, one of the best actors in the region, has a tougher assignment with the morbid paranoid Poe. He succeeds, but besides that clunky exposition, his Poe speaks in a brusque throwaway style that seems to be dismissing the worth of what he is saying, even when he slips into lyrical poesy of his own.  But he knows how to land a sardonic line, such as when Emily asks for him to read her work, Weiner/Poe responds deliciously, “I’ve written about torture; I try not to practice it.”

Dramaworks’ crack creative team features Michael Amico’s set with a proscenium of giant dark raven feathers and Paul Black’s lighting that often morphs subtly — not to create mood but to focus attention on a character. You won’t notice the latter if you’re not looking for it, but it’s superior work.

It’s an intriguing entertaining evening in which two misfits lubricated with cognac and whiskey bond explore their mutual fascination with the darkness of the American psyche – and share some laughs,