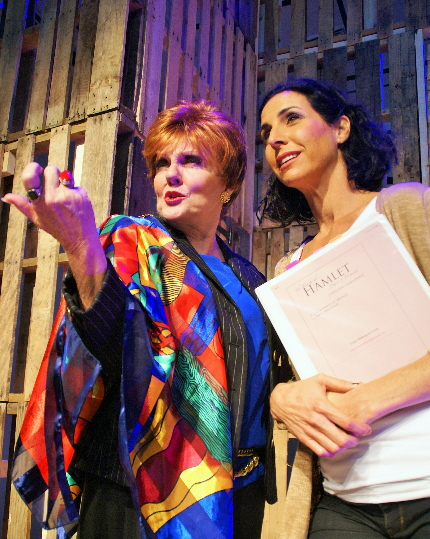 “Inhabiting a role” is high praise invoked by drama teachers, directors and critics to describe when a performer melds so seamlessly with a part that it doesn’t seem that they are acting at all – even when they are employing every bit of craft they possess.

For such a very funny play, the world premiere of Women Playing Hamlet at New Theatre digs deeply into that alchemical process when an actor draws on their own life experience to create a creature nearly impossible to discern as a character in a play on a stage.

Among the questions it asks: How do you inhabit a role when you don’t know who you are yourself, how do you know who you are if you are always playing a role on stage, are you playing an artificial role in your real life to avoid discovering who you really are, and finally are you choosing your role in life?

While all of these weighty issues are explored along with a celebration of the art of acting, William Missouri Downs’ script doubles as a rollicking satire jabbing shallow pop culture, overly reverential attitudes toward literature and the intensive navel-gazing shared by actors and most denizens of the 21st Century.

The audience is greeted by the 29-year-old Jessica (Susie Kreitman Taylor), an endearingly self-deprecating actress. She recently was killed off of The Young and the Restless, and is facing the Everest of acting — starring as Hamlet in a modest production off-Broadway.

To prep for a challenge she is agonizing over, she enlists the coaching of an imperious veteran actress Gwen (Kitt Marsh) who mysteriously played the role for a single performance decades earlier. The play tracks Jessica getting ready under Gwen’s tough love tutelage, a process as focused on Jessica discovering who she is as it is about acting technique.

Gwen admonishes: “No one is ever ready to play Hamlet. Not Burton, not Bernhardt, not you. Admit it. You wanted me to give you permission to let this extraordinary, once in a lifetime, opportunity slip from your fingers.” Jessica asks, “Why would I do that?” To which Gwen responds, “Because in order to play Hamlet you must bring your ‘self’’ to the role. Up till now you’ve simply accepted the roles in which life cast you. That’s the truth, isn’t it? Isnt’ it?!”

But from the opening seconds, Downs clothes the search in dollops of humor; the show begins with Jessica insisting the audience join her in a knock-knock joke. The play is suffused with deft jabs at technology – from Powerpoint projections of texting with Jessica’s niece, to depictions of Internet searches including wry digs at the foolishness of relying on Wikipedia as your source of information.

While you don’t have to be over-familiar with Shakespeare and his masterpiece to appreciate this play, some basic knowledge enhances both the humor and the insight since so much of Jessica’s search intentionally echoes the Melancholy Dane’s – down to a dream sequence with a punny gravedigger. At the funeral of Jessica’s father, her mother reveals she has already married her husband’s brother.

That large cast of characters she meets results in one of this production’s major strengths: Just as Shakespeare had men portray roles of both sexes, Downs has women play all the roles from a Latino bicycle messenger to a drunken barfly to a Minnesota mother. Downs orders up 17 differentiated over-the-top caricatures who help or hinder Jessica. The kicker is they are all portrayed by a talented ensemble of chameleons (or chameleonessess or chamelonettes) Francesca N. Toledo, Rebecca Jimenez, Melissa Ann Hubicsak and the divine Vanessa Elise.

Unfairly pointing out a few, Toledo is a blowsy soap opera actress trying to lure Jessica back to the television program rather than open in the play. Elise is a stuffy twit of a British Shakespeare scholar in one scene and in the next a bartender with a truck driver’s appearance, Brooklyn brogue and surprisingly insightful observations about the Bard.

We’ve only seen Taylor in a couple of less felicitous shows, so to discover that she is this engaging and skilled was quite a welcome surprise. Her sincere and earnest Jessica simultaneously exudes a quick sense of humor as well as a vulnerability that allows her to win over the audience on two levels. She has Jessica’s off-beat humor down pat, but also the underlying angst powering Jessica’s search.

But the revelation is Marsh who had one strong role at New Theatre last season in Visiting Hours but mostly is known for secondary roles. She, yes, inhabits Gwen whose demanding unforgiving exterior comes from an almost religious love of acting, theater and Shakespeare in particular. Marsh clearly communicates without overemphasizing that Gwen also harbors a deep sorrow over lost chances that we can only guess at. Marsh’s gravitas grounds the silliness of the show that would otherwise spin into the ether.

Marsh creates an especially moving moment with Downs’ words when Gwen quietly mourns, “It’s not you Jessica, it’s your age. I mean no animosity, it’s just a simple statement of fact: You and your hyper-linked friends will be the first generation in four hundred years who will not get Hamlet. Because you travel light – light on philosophy, light on self. And thus you will forgo the great roles and the existential angst that comes with. Instead you will accept Prozac over Plato, Nicorette over Nietzsche, tranquilizers over tragedy.”

Once again, New Theatre artistic director Ricky J. Martinez has found precisely the right tones, both farcical and profound, and imbued the entire production with both ever-shifting qualities. He has kept the story moving in a steady stream and he fluidly manages the scores of cinematic changes of scene. The actresses’ vividly distinct creations certainly owe something to his guidance.

As much a hoot as Downs’ script is, replete with running jokes, he has written passages that incisively examine the meaning and worth of art in our lives. Often he melds verbiage from the Bard with his contemporary character’s musings.

For instance, at a crucial point, Jessica has a soliloquy that synthesizes phrases from The Tempest and Hamlet with modern patois: “We are but passengers at a baggage claim; desperate to spot that bit of colored ribbon that separates us from the crowd. And as the look-a-like luggage turns round and round we can only hope that this insubstantial pageant on a minor globe near a short-lived sun has a kind author and a noble end. And that we, before we shuffle off this mortal coil, we’ll spy that bit of ribbon that tells us we’ve found our ‘self.’ ”

The creative crew also is in tune with the tone: Stephen E. Davis’ set design mimics a small company’s stage, Eric Nelson’s nimble morphing lighting plot creates multiple locations, Travis Neff created the techy projections, Anton Church layered in the sound design, Marcia Kreitman designed the droll costumes. We didn’t see any credit in the program, but Women Playing Hamlet has the most extensive and hilarious collection of character-defining wigs, beards and moustaches seen in any production this season.

Silly, profound and ultimately moving in its compassionate validation of everyone’s search for the meaning of their individual life, Women Playing Hamlet once again establishes New Theatre – as it did with Gidion’s Knot – as a troupe worthy of taking a chance on.

Women Playing Hamlet is part of the National New Play Network, which guarantees three productions of a work within a matter of months to enable a playwright to fine-tune a script. Each stop is considered by NNPN to be part of a single “world premiere.” Downs’ play bowed March 4 at the Unicorn Theatre in Kansas City and plays the Gamut Theatre in Harrisburg, Pennsylvania, next week.