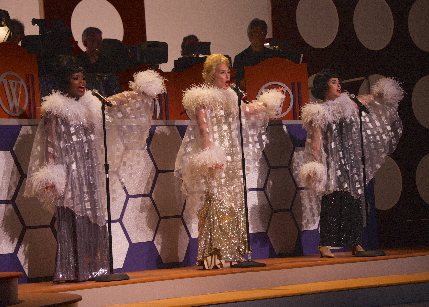 Beehive, yet another innocuous transitorily entertaining revue tracing music sung by women through the 1960s, highlights, intentionally or not, one trenchant observation.

The same early Baby Boomers who started the decade enthusiastically singing along to Lesley Gore’s “It’s My Party” ended up wailing with Janis Joplin’s “Cry Baby.” It’s hard now for those who came before or after to reconcile that transformation in a single group of people; it’s easier to assume they were two different generations, which some of the fans were. But actually the change in pop music was emblematic of the social changes this country and a large swatch of women were undergoing.

So a diverting matinee for graying heads may be the primary reason for this hit parade on display at The Wick Theatre Stage Door, but it provides fodder for reflection later that evening.

This greatest hits production encompassing “My Boyfriend’s Back” to “Proud Mary” is delivered by a septet of earnest young singers not born anywhere near that decade and powered by an invaluable live band musicians who likely were born sometime near then or at least can find the oldies station on the radio.

Oddly, because of the transition, the title Beehive is misleading. Only the first act contains hairspray-drenched standards like “Be My Baby” and “My Boyfriend’s Back,” but evolves into Lulu, Shirley Bassey and Dusty Springfield hits.  Then, the second act starts with the soulful “River Deep, Mountain High,” works its way through Aretha and Janis, and ends with Mama Cass’ “Make Your Own Kind Of Music.”

In fact, while the singers are investing themselves as much as they can in the Barry Mann, Cynthia Weil and Ellie Greenwich oeuvre, the show never catches fire (even “Proud Mary” is a pale imitation) until ten minutes into the second act – and then it makes the ticket worthwhile. 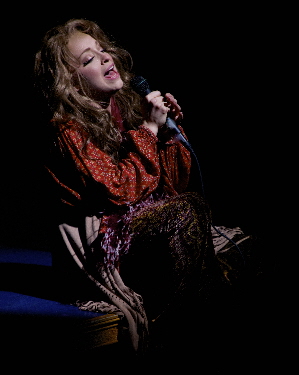 And then, and then, Mallory Newbrough gets the only three-song solo spotlight – which she deserves — to reincarnate Joplin’s “Cry Baby,” “Try (Just A Little But Harder)” and “a subdued but effective “Me and Bobby McGee.” She not only conjures Joplin’s gutsy sound wrenched from deep in her diaphragm but Joplin’s anguish on behalf of every woman in a troubled relationship.

There are other bright spots from the ever-reliable Leah Sessa, Kristina Huegel and Amitria Fanae who deliver that early jukebox of declarations of undying or unrequited love.

The musical created by Larry Gallagher has a few shortcomings including a homogenized feel. For instance, most numbers close with what musical theater composers call a button, a Tin Pan Alley technique dating back decades meaning a strong chord or flourish that clearly signals the end of a number. But the originals of these songs that the audience remembers intentionally did not end that way – many faded out. So the authenticity of the song evaporates and feels like a betrayal of music that took pride in being different than what parents listened to.

Then, there is the awful narration. Gallagher wrote connective speeches charting the change in attitudes as a reflection of how women’s roles and self-image evolved (precisely what we referenced in the first paragraph). But, folks, if you are attending this show, you lived it! To have some twenty-something actress in 2017 tell you what you already know as if you are some archeologist from another planet is aggravatingly condescending. Not to mention insultingly unnecessary.

Only once does the verbiage land, when Gallagher has Sessa explain the music’s importance to women: “Rock got me when no one else did.”

Director Jonathan Van Dyke keeps the pace consistent and the staging workable. The choreography by Van Dyke and Angele Morando-Taylor is, as it must be, just classic dance party moves with some hip swinging, although this cast at the first Sunday matinee was moving sluggishly. Being produced by a company that provides costumes across the country, Beehive benefits from a bottomless trunk of ever-changing wardrobes chosen by Kimberly Wick. Michael McClain’s simple Hullabaloo/Shindig set design is enhanced by Josieu Jean’s projections, which include clips of classic television commercials for Ex-Lax. To accompany Amengual’s drolly-mooning performance of “Where The Boys Are,” Jean projects a cascade of photos of the singing idols.

The unsung star of the show is musical director Caryl Fantel who sculpted the women’s vocal performances, but who also led that kick-butt live band including the foundation of Julie Jacobs’ percussion and Dave Wilkinson’s bass, the nimble guitar riffs from Greg Minnick and the pièce de résistance, the powerful brass of Wes Anthony on saxophone and Tom Stancampio on trumpet. This was money well spent.

It’s a pleasant enough evening, but it makes you think: Remember when The Who sang in “My Generation” that “I hope I die before I get old?” In our youth in the 1960s when we thought we were immortal, did we ever imagine that one day we’d be sitting in a theater hearing our music being sold back to us at $80 a ticket as nostalgia?