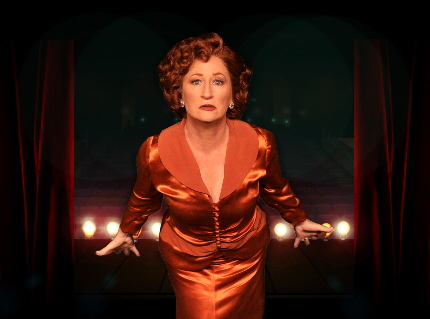 When a theater revives the musical Gypsy as the Maltz Jupiter Theatre is doing this month, there is always the ghost in the room. Actually, with Gypsy, unlike Hello, Dolly! which the Maltz did five years ago, there are multiple ghosts.

So the challenge for director Marcia Milgrom Dodge and her favorite leading lady Vicki Lewis is to preserve the iconic tropes while putting their unique fresh stamp on a work that many patrons can sing along with and who have indelible performances cemented inside their memory books.

Fortunately, Dodge and Lewis have done it before, most memorably creating that Dolly without a shred of Carol Channing or director Gower Champion evident.

The secret is “to tell the story in the most authentic way that (Dodge) and I can, be true to the time period and true to the trajectory of the character. But we just tell the story,” said Lewis, perhaps best known from the TV series NewsRadio, but who wide-ranging career encompasses scores of major parts in musicals across the country.

In the case of Dolly, they kept the music, the script, but focused on the poignant story of a widow in late middle age deciding to jumpstart her life again.

“I’m not trying to rewrite the show; that’s not my job,” said Dodge, one of busiest directors in regional theater. “My job is to be inspired by the source material, the story, to come up with designers to find a way into a physical production that is fresh and intensive and true.”

The lyricist and book writer “have said in print that they did not write a documentary, they wrote a musical. So we have license to be imaginative and surprise,” Dodge said.  For instance, inspired by the fact that the geographic setting changes with almost every scene, the Maltz will use a turntable for the first time, giving the narrative the sense of travelling.

But the ghosts are hard to avoid. “There are a lot of legends who have done” Mama Rose, the iconic freight train of a stage mother made famous by Merman, said Lewis. “There is a lot of onus. Even for me, the performers I have seen over the years, they sit in my head, they stay in the psyche of everybody. They have certainly informed on some subconscious level…. So it’s tricky, but I stay away from all those other voices. I stay away from Merman and Patti.”

The key is finding the emotional truth of the story and the characters, then finding fresh ways to illustrate them.

Rose pushes her daughters with a steely determination to succeed in dying vaudeville, even to allowing her shy daughter Louise to become the stripper Gypsy Rose Lee in burlesque. But “you don’t play her as a monster. She doesn’t think she’s a monster,” Lewis said. “She’s flawed in a lot of different ways, but she’s not a malicious human being. She’s vulnerable. She’s misguided.”

The two see it as a gritty story. Rose “is desperate to get out of the house (where she lives with her) father. She’s desperately poor. She desperately wants this for her kids,” Lewis said.

Gypsy is widely-considered one of the best-constructed musical theater properties in the canon, alongside Guys and Dolls. Freely adapted, very freely from Gypsy Rose Lee’s autobiography (which she often admitted was more imaginative fiction than reliable non-fiction), the script was by Arthur Laurents, the direction by Jerome Robbins, the lyrics by a Stephen Sondheim who wanted to do the music but was vetoed by Merman who didn’t want to trust a newbie, and a superb score by Jule Styne. Amazingly, it lost every 1960 Tony to The Sound of Music or Fiorello.

Dodge and Lewis have worked together frequently more than 20 years, almost annually in recent years. “Something magical happens every time we get in a room together, it’s really true. We don’t need to talk. It’s like a marriage,” the actress said.

They even did Gypsy together in 2008 at Music Circus in California in a production with a very short rehearsal period that resulted in an effort neither feels was the best they could offer under better circumstances. Mama Rose was not on Lewis’ bucket list at the time, although she had seen and heard other iconic renditions such as Patti Lupone’s Tony-winning turn. “I was just dipping my toe in” the California production. After the experience, “Then I had a passion to do it.”

Dodge doubles as the choreographer, reveling in the chance to recreate third-rate vaudevillian and burlesque routines. Robbins’ work was drawn from the way he staged the entire musical and some movements are almost dictated by notes in the score. ”There was a build or a lift or accent that came out of what the orchestrator embellished,” she said.

But Dodge plans to bring her own spin to Dainty June and Her Farmboys’ numbers and the “You’ve Gotta Have A Gimmick” strippers anthem reflecting considerable research into dance styles, even the autobiographies by Gypsy and her sister June Havoc.

All of it is internalized before she produces the steps that will reveal character. For instance, she’d go for hoary steps in some numbers because “this number is choreographed by Mama Rose. It’s Mama Rose being channeled through me, how would she want her daughter to perform.”

While the Maltz has a cadre of designers it employs often, Dodge has brought in a group of people she has worked with on and off over the years such as costume designer Leon Wiebers and lighting designer Paul Miller. John Scherer, the actor playing Rose’s beleaguered boyfriend Herbie, is another frequent colleague.

Dodge and Lewis assured that even fans who have seen the show many times can, indeed should, see it with fresh eyes.

“Expectations are premeditated resentment,” Lewis said. “You (should) sit down in your seat and go on the journey with fresh eyes and clear the slate….Why would we not reinvent? Why would we continue to parrot what other performers and directors did? That’s not why you paid” for a ticket.