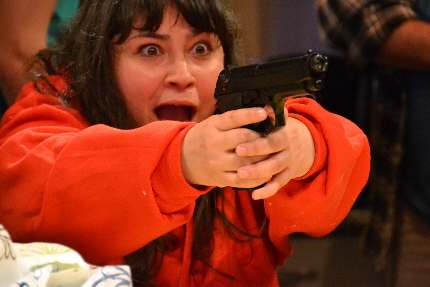 A somewhat distraught Joline Mujica tries to cope with a disintegrating world in the Theatre at Arts Garage’s world premiere of Carter W. Lewis’ The Hummingbird Wars / Photo by Amy Pasquantonio

You think you’ve got troubles? The extended Everyman family in Carter W. Lewis’ jet black satire The Hummingbird Wars is struggling with more woes than the entire roster of ten plagues that afflicted Egypt.

The world premiere at Theatre at Arts Garage is hysterically funny but unnervingly upsetting because the depiction of a society disintegrating around and under you is too damn recognizable to allow unimpeded belly laughs.

The play starts like an episode of Modern Family with a nuclear family around the breakfast table prepping for the day. Mel the mom is getting ready for a full slate of social activism. Warren the dad is washing dishes. Pete the 15-year-old son is staring blankly into space. Grown daughter Kate the poet will appear with her lesbian lover, the quirky Tracey. Just a typical American household in a typical suburban kitchen in Minnesota.

Oh, there are a few hints of something off-balance – the slight disconnect in the father’s eyes, the long cracks in the kitchen walls as if a T Rex had been clawing at them. Later, Mel finds the words to make the amorphous feeling corporeal: “We all now live with a constant tingling sensation of impending calamity.”

But then, piece by piece, over 75 minutes, their tentative physical, emotional and psychological homeostasis falls apart, inexorably building to the cusp of an apocalypse like Ionesco’s society in Rhinoceros.

It starts with a broken water pipe and ends with the house literally breaking apart from bulldozers, the daughter holed up in a barricade of cardboard boxes mistakenly sent from a dish network company, her lover taking an assault rifle outside to kill the guy who has hacked into every cyber-related aspect of their lives, the wife convinced that she is literally disappearing out of ineffectiveness and the father flashing back to a nightmarish episode in Afghanistan. You can’t blame them: Between those tableaus is an escalating accumulation of what Jules Feiffer called “little murders,” the frustrating annoyances and serious crises that lightly scrape away at the soul, but eventually metastasize into fatal toxins.

Carter, director Greg Johnson and the totally committed cast force the audience to face up to the terror that we keep tamped down inside that we are impotent to stop the world going to hell in a handbasket.

At one point, Pete suggests that “they” are trying to kill the family. Mel answers, “No, they don’t have to kill anyone. (They rely on) the time and energy it takes just to reassert identity; I mean think of all my pin numbers, the passwords and codes; how do I re-establish credit, re-apply for digital existence. It will devour any time I have to fight them.”

Later, Mel quotes Tracy as saying, “Hummingbirds are always just a few hours away from starvation; from internal annihilation.”

Obviously, this is a pretty dark vision and it would be terribly depressing if it wasn’t so funny. Carter has thrown together five hyper-articulate people who cope with the surrealistically-mounting absurdities with witty banter and a vain but admirable determination not to let these adversities conquer them.

About to leave for class, the son launches into a long diatribe about the hell that is public school: “It’s ritual hazing fashioned on social Darwinism disguised as education. A compulsory gathering where your survival is based on the currency of your phone technology and your amassed knowledge of Demi Lovato. And the education system itself is an uncreative clump of memory exercises that – inevitably – somewhere-down-the-road, booze or anger will erase like an old Etch-A-Sketch.  And even that would be tolerable if it weren’t for the teachers who sermonize about individual creativity, when all they really want is for you to shut your trap, take a number and regurgitate like a standardized test-ready automaton-info-parrot.”

As he leaves, Dad calls out with unconvincing cheer, “You know, these are the best years of your life.”

Lewis may have nowhere to take all this but Armageddon, but he’s got a unique voice that combines a martini dry wit with thoughtful observations of the current zeitgeist. Florida audiences will recall his previous work at Florida Stage under Louis Tyrrell, artistic director for Theatre at Arts Garage. They include The Storytelling Ability of A Boy (remember the nailgun and the disaffected teenager’s hand?) and the last show at Florida Stage, The Cha Cha of the Camel Spider.

One of his skills is setting up familiar tableaus of family life and taking them to his strange surreal Neverland. For instance when Pete brings an automatic pistol to school, this kicks off the classic “Son, we have to talk” conversation with his parents. The parents and the audience think he is lying about finding it on the coffeetable, but the folks paternalistically defer a definitive conclusion to the talk because of other pressing disasters. Until he finds a second pistol in a kitchen cabinet. And then an assault weapon.

Mel’s blithe stopgap answer is: “We just started a turn-in-your-gun initiative at Forsythe police station. You get an Amazon gift certificate, so we’ll talk about what you’d like to read later.”

Johnson has a skilled cast of comic actors to work with, starting with Todd Allen Durkin as the war hero father with PTSD who only leaves the house to stand outside and peer in the window. He is wonderfully woebegone as he tries to deal with the Whack-a-Mole of problems. Durkin does so much with just a look, like the dumbfounded stare as his daughter and her lover nuzzle in front him with less abandon than any couple of any sexuality would do in front of a father.

Jeni Hacker at first seems as normal as any driven career woman, but she creates an upward spiral of angst as her impotence to affect the world circles the drain.  Andrew Griner Jr. is a convincingly oddball teenager, perhaps brighter than everyone else in the house, but who is watching his family slip down the rabbit hole. Gretchen Porro, one of the sisters in Palm Beach Dramaworks’ Dancing at Lughnasa, and Joline Mujica (also a Tracy in Actors’ Playhouse’s Hairspray) make a hilariously cooing couple. Kelli Mohrbacher isn’t seen, but her amiable voice is unnervingly seductive as a customer service agent on the telephone who hits on Kate, armed with very personal information she shouldn’t know.

If you’ve ever felt like a polar bear on an ice floe melting to nothing thanks to global warming, The Hummingbird Wars will resonate.

The Hummingbird Wars runs through Feb. 2 at The Theatre at Arts Garage, 180 NE First St., Delray Beach (north side of the parking garage). Performances 7:30 p.m. Wednesday-Friday, 2 p.m. Saturday and Sunday. No Saturday night. Running time about two hours including an intermission. Tickets are $30-$45.  Call (561) 450-6357 or visit www.artsgarage.org